The unconventional and always entertaining Mayor of London descended with his team on Midtown New York City today to launch a new initiative between the two cities, with Arianna Huffington kicking off the promotional event.

Boris Johnson, who recently turned his hand to a humorous yet poignant biography of Winston Churchill, has become a big advocate of Tech and its role in job creation and investment in the London economy.

Johnson and his team came to New York to pitch for greater collaboration between the two global Financial centers for the establishment of a platform for cross-border investment, technology sharing and resourcing. FinTech is the hip term given to "Financial Technology", or the use of technology to reform, reboot and disrupt old-school banking. Some great examples of this were being showcased by Johnson and the "Innovate Finance" initiative that is sponsored by the City of London. 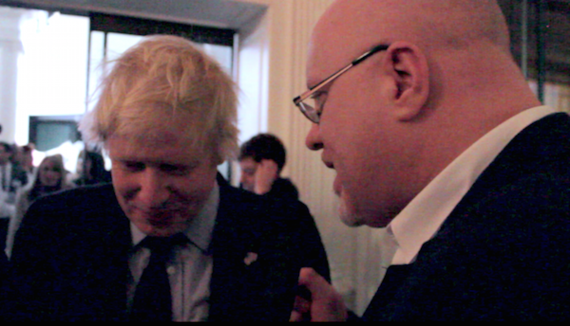 The author interviewing Johnson on FinTech

According to research announced just yesterday by Life.SREDA, FinTech investment globally trebled last year to $6.8 Bn and it's set to increase to $18Bn just in NYC in the next few years. London is definitely taking its share of investment in this growth arena. New figures compiled by London & Partners show that London-based tech firms attracted $795.2m from US investors in 2014, more than doubling the previous record figure from 2012 of $296m.

I had the opportunity to interview Boris Johnson for my Radio Show Breaking Banks and asked him to provide some insights into London's positioning as a global FinTech hub. I asked him why London was specifically making such a strong play for FinTech investment, and he wasn't shy in staking London's claim on the title of FinTech centre of the world.

"We've got the banks, we've got the biggest financial sector anywhere in the world, but we've also got the expertise. We've got more people involved in the sector than any other European Capital and probably any capital in the world, and it's growing the whole time."

He also focused on the core development skills that will continue to fuel growth, and it wasn't a gaggle of bankers where Johnson sees the future of the sector.

You'd expect that from the Mayor who hosted the 2012 Summer Olympics.

Who will dominate? NYC or London?

When I asked him about whether it was really NYC vs London, he softened the rhetoric on London and recognized collaboration was the ideal outcome for both cities.

American investors are putting more money into London-based technology companies than ever before, according to new figures announced by Johnson today. In total, London firms attracted $1.4 billion in venture capital funding in 2014, meaning that US funds were responsible for over half of all new funding received by the city's tech sector.

"London has been a great place to start and grow our business," said Taavet Hinrikus, co-founder of TransferWise. "The city's status as both a tech and financial hub means we've been able to grow the company from just my co-founder and I to a company of 250 employees, processing over £3bn worth of customers' money in four years."

Alastair Paterson, CEO of Digital Shadows, said: "We will use this investment as a springboard to scale up Digital Shadows in order to reach new markets. We have been able to grow from a London-based start-up into a company that is now taking on global challenges in cybersecurity. London clearly has the infrastructure in place to allow other companies to follow in our footsteps and expand into global markets."

The Financial Services sector caters for around 8.5% of U.S. GDP, and the size of the deposit market is around U.S $10 Trillion. The Financial Services space feels a lot like the Internet did back in 1999. Cities like London and New York, and pundits like Boris Johnson are starting to understand that the future of the banking system is in technology.

Yes, the British are coming, but more importantly  Tech is coming to reimagine the finance sector, and that can't be anything but a net positive for consumers, employees and entrepreneurs alike.