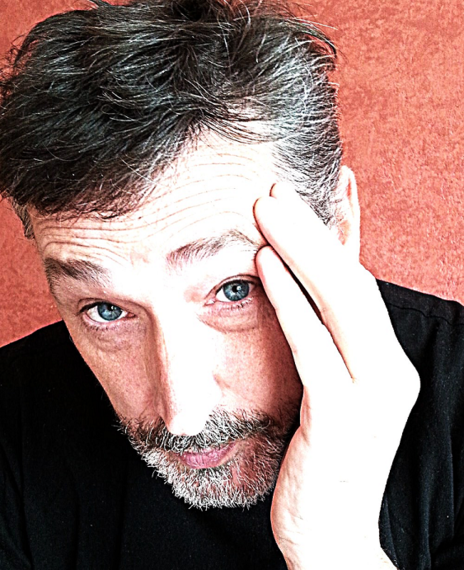 Tony Schumacher has written for The Guardian and The Huffington Post and he's a contributor to BBC Radio and London's LBC Radio. He has an extraordinarily varied background, having been a policeman, stand-up comedian, bouncer, taxi driver, and actor, among other occupations.

The British Lion is a sequel to his first novel, The Darkest Hour. It continues the alternative history tale in which the Nazis have emerged victorious and occupy Great Britain. John Rossett--former detective and now reporting to the Nazi victors--is in the hospital recovering from gunshot wounds sustained in events from the first novel. Rossett's boss, Nazi Colonel Ernst Kohler, asks him to help save his wife and daughter who have been kidnapped by American spies.

Rosset threads his way through a landmine field of the Nazi SS; the violent British resistance who killed his wife and child; and Americans loyal to President Lindbergh, as he stealthily attempts to prevent Germany from developing the atom bomb.

But very little is as it seems in this thriller.

When you wrote The Darkest Hour, did you have a sequel such as The British Lion in mind?
No. Not at all. When I wrote The Darkest Hour, I never expected things to happen as they did. When I first wrote it, I wasn't sure if I would even write another book. I had no idea if it was any good. After having written a hundred-ten thousand words, I was dazed and confused. I didn't expect it to get picked up by Harper Collins.

I had no plans, whatsoever. Suddenly, everything clicked. The book received a really good reception and I couldn't say no when the publisher asked for a sequel. I'm so glad they did because I never realized how attached a writer can get to the people in his books. I was so pleased to be able to revisit John Rossett and see how he was doing.

Issues of guilt and redemption play a large role in both books, especially in The British Lion. Tell us more about that.
John Rossett has committed terrible crimes. He's taken part in one of humanity's greatest crimes. His fingerprints are all over the Holocaust. He could not be any more guilty than he is. So, it's very strange: I like the guy, despite what he's done. I wanted to give him a bit of hope. Although he's done terrible things and knows he can never atone for his actions, he feels crushing guilt and wants to be a better man.

Perhaps, he'll be able to find a modicum of peace in his attempts to steer a different course.

That's something I really loved about both novels: how you tapped into the complexity of human life--people aren't all good or all bad.
Yes. What a boring world it would be if we were either all good or all bad. It's impossible to know what capabilities reside in people we think we've figured out. It's been my experience that people can always surprise you--either by being unexpectedly good or very bad. We're all multi-faceted. I want my characters to reflect that reality of life. Otherwise, they're nothing more than boring caricatures.

How do you deal with the issue of readers knowing the actual history of World War II as opposed to your alternative history?
When we read a novel, we suspend our awareness of reality. The minute we sit down with a book, we immerse ourselves in another world. If it's a Michael Connelly novel featuring Harry Bosch, we have to accept that Harry is a little bit too old to be doing some of the things he does. Readers accept these things because we want the author to take us to a new universe--even if it's only for fifteen minutes on the subway. During those minutes, we're not on the subway; we're in that different universe. I simply hope readers will trust me to make them believe the story. It's sort of like when you were a kid: you accepted alternate realities. An author has to capture the reader enough to make the story credible. Of course, anything I describe in the novel could have happened. When I look at Lindbergh or Joseph Kennedy, I can envision different outcomes of the War were possible. After all, Lindbergh was sympathetic to the German cause, and Joseph Kennedy, Sr. was recalled from his ambassador's post in London by FDR because of his pro-German leanings. I wanted the novel to be somewhat based on fact--or possibility--but to stretch things in the direction of fiction, which I think usually tells a deeper truth.

You recently posted something on Facebook: a short while ago you were sleeping in your car and going through very tough times. Will you tell us more about that and your views about success?
I was married and was working as a cop. Suddenly, in a very short period of time, everything ground to a halt. There were two ways of handling things: one involved turning to friends and family and asking for help. The other was a really stupid "John Wayne" kind of thing. Of course, I chose the latter. I spent two months sleeping in my car with my beloved dog. I had no money, and after a month, realized I had to change something fast. I quit my job and began driving a taxi for some quick money. Finally, I went to a friend who gave me a loan so I could put down a deposit on a new place to live.

I had nothing left--and the thing that comes with having nothing is an incredible sense of freedom. It might not feel like that at the time, but it is quite liberating. I felt I could do almost anything, and literally could start all over with no responsibility for anyone but myself and my dog. I decided to see my circumstances as an opportunity. I decided to start doing what I had always wanted to do--and that was to write.

What would you be doing now if you weren't a writer?
When you look at my job experiences, it could be almost anything. I did a bit of acting and some stand-up comedy. I like to think I'd probably still be struggling at those two things--I'd be trying to succeed at something creative.

What's the most important lesson you've learned about writing.
It sounds trite, but if you want to be a writer, don't give up. It really is that simple. If you get lucky as I did, or if it takes ten years, you cannot stop fighting. And it is a fight with the industry, with readers, and with the manuscript. Every single moment, you must get out there and fight.

What's the best part of the writing life?
Getting lost in writing a book.

I love living with the book I'm writing. In my two novels, I'm living in 1947 London, and trying to convey to the readers the excitement of what's happening. I love that feeling of wanting to move to the next chapter. And it's gratifying to hear from readers telling me how exciting they find the books.

Will John Rossett be returning or will you write a standalone novel next?
I've got two outlines for standalone novels. I'm thinking it's time to put down some new roots to keep the soil fresh. However, only five days ago, the publisher asked me for a third John Rossett novel.

Congratulations on writing The British Lion, an alternative history thriller so compelling and convincing, the reader forgets the actual history of World War II, and focuses on John Rossett and the other compelling characters in this novel.