For the many visitors who've flooded The Broad Museum at its official opening this past weekend, the experience was full of surprises. Built by prominent architectural firm, Diller Scofidio + Renfro, the museum building grabs ones' attention from the get-go. Its striking façade is covered with a porous, honeycomb-like veil with a single eye-like window, which stares across the street at its older cousin, MOCA. 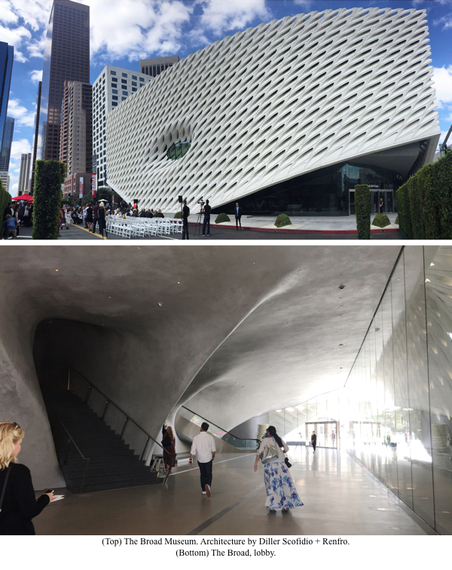 An even bigger surprise greets visitors upon entering the museum lobby, whose warping, dancing walls, with their sinuous lines, give the impression that visitors just entered into a dark, mysterious cave. I had the privilege of visiting The Broad several times during its construction, and every time the romantic architecture of its lobby made me think of an operatic overture, taking place before the curtain goes up. Just think for a minute about the impersonal, bank-like lobby of the Museum of Modern Art in New York... Here in LA, the entrance to our newest museum puts one into a particularly adventurous mood. 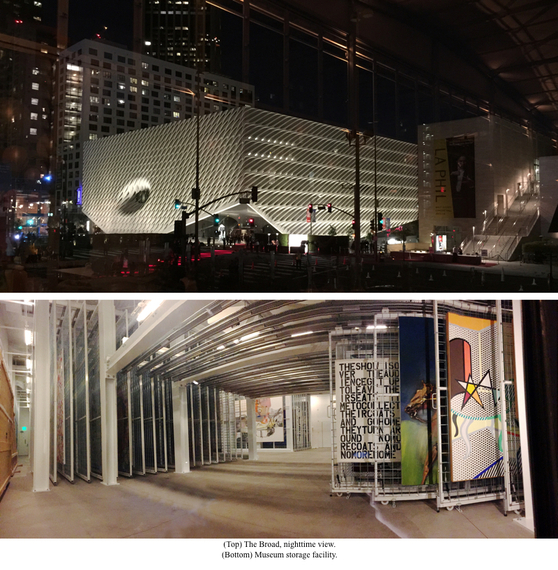 The last few days, I've been snapping pictures of The Broad both day and night. It definitely commands attention. With almost 50 years of art collecting, LA philanthropists Eli and Edythe Broad have amassed an impressive collection of 2,000 contemporary artworks, which is housed in their new museum on its three floors. But only 250 works were chosen for the inaugural display in the galleries on the first and third floors. The rest of the collection is stored in a specially designed storage facility occupying the museum's second floor.

Knowing the Broads' particular affection for the art of Jeff Koons, it was somewhat expected that his numerous sculptures would dominate a few rooms. Of course, it's impossible not to be impressed by his gigantic shining blue Balloon Dog. But wisely, Koons' rather boring, inept paintings were left to rest in storage. 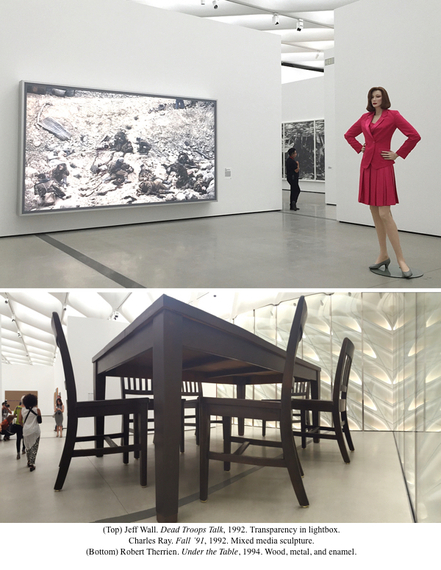 There are interesting and unexpected juxtapositions of various artworks, as is the case of larger than life sculpture by Charles Ray of a formally dressed businesswoman, with an unintentional and surprising resemblance to Carly Fiorina. Next to it, there is a monumental lightbox transparency by Jeff Wall, with a staged scene of battle with dead soldiers coming back to life. Don't ask... You just have to see it.

Every time I encounter Robert Therrien's huge sculpture -- a seemingly banal furniture set consisting of a dining table and chairs -- I find myself in awe. And I bet that you, my friends, will feel the same when you find yourselves dwarfed by the gigantic scale of this sculpture -- one of my favorites here. 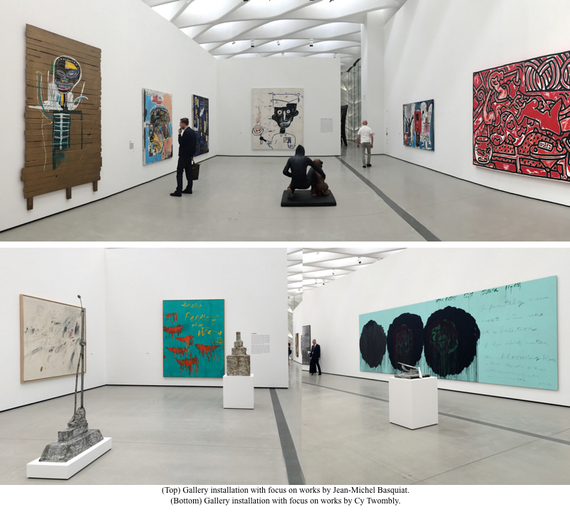 The inaugural exhibition demonstrates not only the width of the Broads' collection, but also shows its sustaining focus on the art of several artists particularly appealing to them. Any major museum would be lucky to have such in-depth collections of Cy Twombly and Jean-Michel Basquiat as those assembled by the Broads. 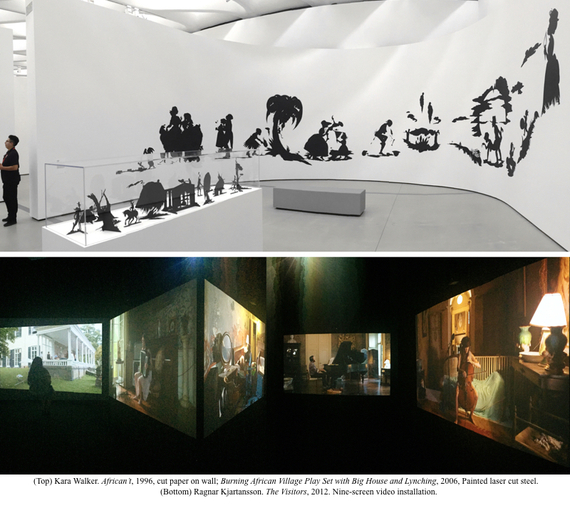 During my first visit to the museum, I spent almost three hours slowly walking through the numerous galleries, snapping photos and chatting with fellow art aficionados. Some were rather critical of what they deemed rather unadventurous and predictable choices. I told them to take a look at the huge catalog of the Broad collection, and see how many more surprises they find. I dare anyone to go to the room with a curving wall showing the provocative black paper cutouts by Kara Walker and call it unadventurous. And when I stepped into the dark gallery awash with music and holding 9 large screens projecting bizarre, fascinating videos by Icelandic artist Ragnar Kjartansson, I felt as if the mysterious, operatic promise of the museum's cavernous lobby had been fully fulfilled.