The small, green island of Mfangano sits just off the Kenyan shore of Lake Victoria. A traditional fishing community, Mfangano is not what most would consider hotspot of technology: most of the island's 26,000 residents live close to the water and either walk or pilot small, handmade wooden boats to get around. The first time a car drove the island's single dirt loop was in 2007.

Internet access, readily and affordably available in the nearby regional capital of Kisumu, remains limited. Cellular providers have avoided building towers on Mfangano due to the unique challenges of building long links over water, as well as issues surrounding securing a building site on an island with hilltops some consider sacred. Instead, islanders rely on distant mainland cell towers for their data service, resulting in slow, unstable connections that continually drop out.

Mfangano is also home to Organic Health Response (OHR), a small Kenyan NGO focused on delivering HIV/AIDS-related social services to the community. As Kenya's Suba district has one of the highest HIV infection rates on the planet, estimated at over 30%, community participation in regular testing programs is critical for OHR's success. In an early effort to discover incentives for enrollment, Chas Salmen, OHR's director and founder, held gatherings to understand the issues Mfangano Islanders felt were most important. One thing kept coming up over and over again: "We want Internet."

Today, Mfangano enjoys a stable 512kbps connection deployed by Inveneo and their Kenyan ICT partner SetRight. This 90km connection, possibly the longest operating WiFi broadband link in Africa, is used by OHR to operate a well-equipped computer center, library and training facility named the Ekialo Kiona Center (EK). "Ekialo Kiona" means "Whole World" in the local Suba language, and in exchange for maintaining a schedule of HIV tests every six months community members are granted access to the EK and the Internet.

As a result, community enrollment in OHR's programs has risen to over 2,000 participants - 10% of the community - dramatically improving their ability to operate and creating opportunities for new programs.

"The timing of the project was just perfect," said Salmen. "It went live just before schools closed for a one-month break and we had 250 secondary students enroll right away. 75% of our new enrollment has been young people, under 25. They engage with us in a way that wasn't possible before."

The new infrastructure also includes a network-connected radio transmitter, allowing OHR to stream audio from a small studio and broadcast from the same tower used by the WiFi equipment.
"The radio station would have been completely impossible without the network, and it's out-performing all of our projections," said Salmen. "When we broadcast we get SMS messages from a huge area, including Kisumu, 90km away. EK Radio fan pages have started appearing on Facebook without any prompting on our side. It's a total game changer to start those conversations and have everyone listening at once."

Among the long list of needs in developing communities, broadband connectivity may not stand out as an obvious priority: education, sanitation, etc. generally rank above access to Twitter. But as Cisco's SVP of Corporate Affairs Tae Yoo points out, access to the Internet can act as a powerful catalyst, anchoring and expanding economic and social development by creating jobs, increasing productivity and ultimately increasing per-capita GDP. Research from Deloitte, the GSMA and World Bank all point towards broadband connectivity, now classified as a basic human right by the United Nations, as having a direct and substantial impact on economic and social advancement in developing communities.

With UNESCO estimating that 90% of communities and individuals in developing areas are without access to broadband, organizations are taking notice of the impact that broadband can make. And with emerging markets leading the world in social media growth, the potential for connecting with beneficiaries and monitoring programs in real-time is undeniable. Broadband connectivity has the benefits of both immediate results and a long runway ahead, making it a very attractive option when prioritizing scarce resources.

Understanding that high-quality Internet access is increasingly critical for community and economic development, Inveneo launched the Broadband for Good Initiative (BB4G) with the goal of accelerating access to high quality broadband across emerging markets and the developing world.

By using radically low-cost technologies and pushing new business models and approaches, BB4G is driving delivery of broadband even deeper into peri-urban and rural areas. BB4G projects currently provide broadband access to 20% of rural Haiti, and span deployments in Micronesia, Kenya, Uganda and the West Bank of Palestine.

When fast, reliable Internet access arrived at the EK Center word spread quickly. Soon groups on Mfangano and surrounding islands began asking how they could get connected as well. In response Inveneo and OHR are raising money to launch a locally owned and operated Wireless Internet Service Provider (WISP).

"Our goal for the WISP is to establish a sustainable means of bringing affordable Internet access to the island," said Salman. "This kind of connectivity would dramatically increase our impact on rural health, create local jobs and support local businesses at the same time."

Along with the right technology, a viable business model is critical to the long-term success of a broadband project.

"Mfangano is a great pilot for building sustainable broadband networks" said Eric Blantz, Senior Program Director for Inveneo. "The challenges we've seen here are not unique, but the solutions we're finding are innovative and replicable across the developing world." 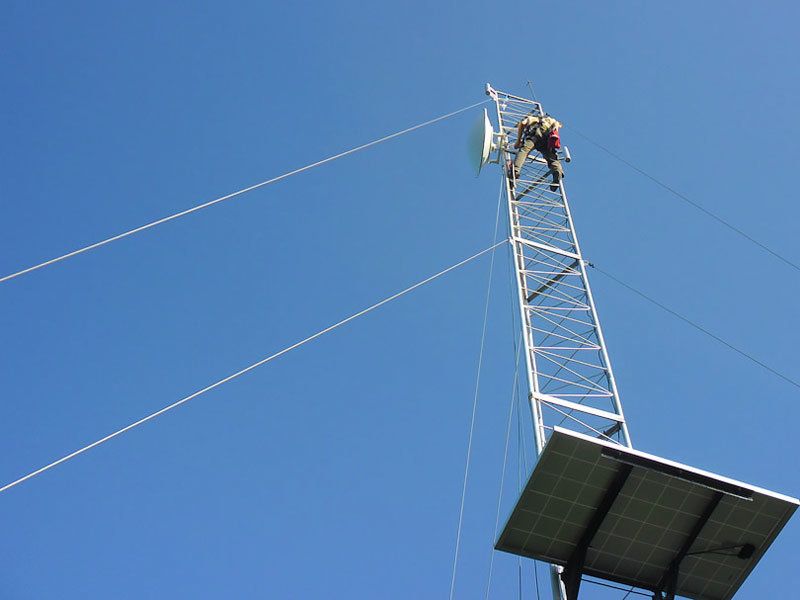 1 / 5
Inveneo's Andris Bjornson aims the Mfangano Island end of the wireless link. Very precise alignment is necessary to make a 90km WiFi connection work, similar to trying to hit a friend with a laser pointer from 50 miles away.
Inveneo