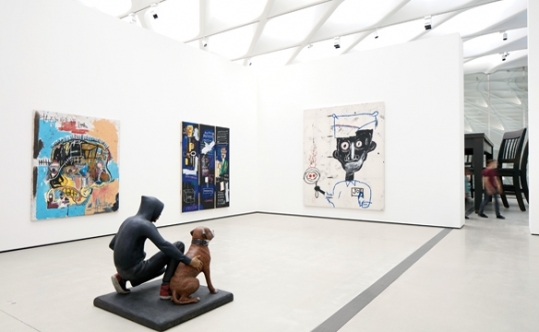 Installation of works by Jean-Michel Basquiat, John Ahearn and Robert Therrien in The Broad's third-floor galleries. Photo by Bruce Damonte, courtesy of The Broad and Diller Scofidio + Renfro

Everything about visiting The Broad, the new museum on Grand Avenue in downtown Los Angeles that Eli and Edythe Broad built to house their contemporary art collection, is better than expected, better than a drive-by of the exterior leads you to believe, better than photos would have you think. Yes, there are plenty of reasons to criticize The Broad, which opened Sept. 20 across the street from the Museum of Contemporary Art, but those pale before the very enjoyable visitor experience.

Joanne Heyler, the museum's director and chief curator, who has run the Broad Art Foundation for more than two decades, called The Broad "Eli and Edye's gift to L.A." The Broad's chief ambition is to "connect art with the public," Heyler said, and to that end, the foundation has made 8,000 loans of artworks to more than 500 institutions worldwide since its founding. The new museum will be open six days a week, closed only on Mondays, and admission will be free, with online advance-ticket booking and only a limited number of daily walk-in tickets. Some special exhibitions may require admission fees.

At the museum's press preview, Los Angeles Mayor Eric Garcetti called The Broad "the boldest new articulation of who we are," saying that its opening makes L.A. "the cultural heart" and "the creative crossroads" of the United States.

Eli Broad, speaking at the same preview, told the international gathering, "Contemporary art is the art of our time," and also stressed how much he wants to share his collection with L.A. residents as well as with visitors to a city that, according to Broad, now has more space devoted to showing contemporary art than any other city in the world. 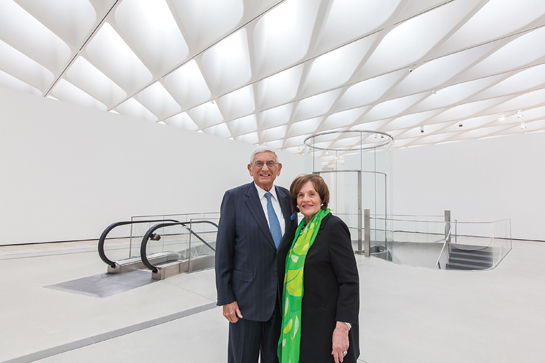 Hype aside, The Broad succeeds in delivering a highly personal survey of contemporary art of the last 50 years, with notable works by brand-name artists from Pop Art icons Andy Warhol and the more recent Japanese Haruki Murakami, mixed in with works that are political, that question what art is. But none of it strays too far from the accepted and the pleasing.

The visitor experience begins from the street. The 120,000-square-foot museum, designed by the New York architecture firm Diller Scofidio + Renfro, and built at an estimated cost of $140 million, is encased in a white honeycomb carapace, dubbed "The Veil," which is elegant and beautiful up close, and which plays well in response to the gleaming metal exterior of its neighbor, Frank Gehry's Walt Disney Concert Hall. The Veil is something of a construction marvel, made mostly of concrete panels that allow diffused light into the building and support the open, column-less galleries inside.

Although the museum's exterior appears somewhat brittle, cold and formal at first glance, the inside brings the visitor immediately into a dark, inviting space shaped by gray free-form walls that are as futuristic as Gehry's Disney Hall, but far more womb-like. A narrow escalator whisks the visitor directly to the third-floor galleries, a bright 23,000 square feet of exhibition space. The artworks currently on view on the third floor are organized as a chronological survey of collection highlights from the last 50 years. From there, one descends to the second floor, which offers views into the center of the building, "The Vault," a vast storage facility containing the remainder of The Broad's 2,000-work collection that is not on view or on loan, as well as conference and event rooms, and the building's administrative offices. And finally, the visitor returns to the first floor, where several installations are on view and where the work generally will be more current than the art-historical sweep shown on the third floor.

Let's talk about the art: There are early Warhols, including two "Campbell's Soup Can" paintings from 1962. There's a Jasper Johns "Flag" depicting the American flag, and a very early Robert Rauschenberg "Combine," from 1954, that features an abstract collage of oil, charcoal, newspaper and fabric on a nailed wood structure raised above two light-bulb-like glass radiometers. There also is a roomful of Roy Lichtenstein paintings, whose Pop Art dots echoing the comics that inspired them interact nicely with the Veil, which is visible in the gallery ceiling and through a window.

Works by Jeff Koons abound, including an early Neo-Geo work of basketballs floating in an aquarium (Broad has been the largest private collector of Koons' work). Signature works are included by painters Barbara Kruger, Jean-Michel Basquiat, John Baldessari and Ed Ruscha, and by Kara Walker, the Stockton, Calif.-born artist whose cut paper decoupage covers whole walls with silhouetted images that are a commentary on representations of African-Americans as much as a corrective to conventional American history.

The Broad also features works by sculptors Mike Kelley and Charles Ray. The staged self-portrait photographer Cindy Sherman is represented, as are the now-iconic German artists Anselm Kiefer, Joseph Beuys and Thomas Struth. Robert Longo's early work from the 1980s is shown here, along with recent work about the riots in Ferguson, Mo. The museum's ground floor currently shows two installations: "The Visitors" by Ragnar Kjartansson, which includes nine screens, each showing a musician in a different room, all playing a song together that is strangely moving; and Yayoi Kusama's "Infinity Mirrored Room," an immersive experience that hopes to blow your mind.

So, why does The Broad get mixed reviews? As much as the Diller Scofidio + Renfro building may be a reflection of Broad himself (a hard exterior reveals substantial treasures inside), and as much as the museum's holdings are a showcase for the Broads' taste as collectors of contemporary art, they also reflect facets of the man who named his autobiography "The Art of Being Unreasonable" (an attempt to make a virtue of his reputation for being controlling and meddlesome). Although represented as "a gift" to L.A., The Broad remains part of a private foundation controlled by Broad, with all the tax advantages available to a nonprofit that purchases and loans its art; The Broad building and its collection remain very much a successful businessman's collection, featuring mostly blue-chip brand-name art and lacking the singular vision that distinguishes truly remarkable individual collections such as Philadelphia's The Barnes Foundation, or even the collection of the Frederick R. Weisman Art Foundation here in Holmby Hills.

As only 15 percent of The Broad collection is on display -- the rest is in the Vault --- The Broad Museum is, in the end, more storage facility than public collection. If the point was to show off more of the collection, why not a larger building, with three or more exhibition floors, in order to exhibit 30 percent, or 40 percent or even more of the collection? While Heyler insists the Broad Art Foundation's collection will always remain a part of the museum, Eli and Edythe Broad still retain the power to grow, sell or move it if they so choose. Finally, there remains an inherent conflict of interest in shaping a museum around a private collection: Doing so validates the work and also affirms its cultural value, and thereby increases its worth, influencing the art market in ways that favor the works' owners.

Yet, as important as it is to recognize these objections, one can't help but celebrate what Broad has accomplished in opening a new museum in downtown L.A. on Grand Avenue: a new attraction for tourists, both domestic and international. But it is the great art itself that stands out among the myriad pleasures The Broad affords.

If, as F. Scott Fitzgerald said, "The test of a first-rate intelligence is to hold two opposing ideas in mind at the same time," then The Broad is a first-rate addition to Los Angeles with some issues.