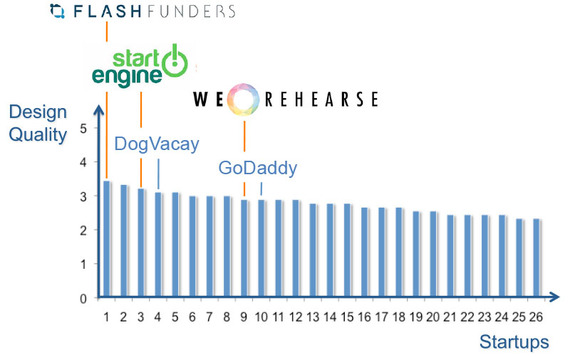 A startup is about daring market and technology positioning followed by exquisite execution. Since even a bat can position itself, the part of the game one can control becomes all about the execution. Founders agree that design is the key to successful execution, and they proclaim that design contributed more than 70 percent to their success.

When asking startup founders at LA Tech Day about the likelihood of winning in the startup game, they all confidently declared their likelihood of success to be one hundred percent. This bold assertion stands in stark contract to the reality, which is that less than ten percent will succeed. Are founders suffering from self-deceit, hallucinations or are they all just blind as a bat?

There may be a fourth explanation. A certain amount of confidence is needed for startups to compete against incumbents since they need to create breakthrough offerings. Breakthrough innovation requires formulating and executing a strategy of two contradictory ideas consisting of aspirations and current reality. If one is out of balance and one either fails to create a market or is forced out of an overcrowded market then the game may be over.

Confidence, in moderation, is thus important for positioning as well as execution. However, our study revealed that founders are hugely overconfident in the quality of their design and when it came to estimating risk exposure, their assessments were more or less random. 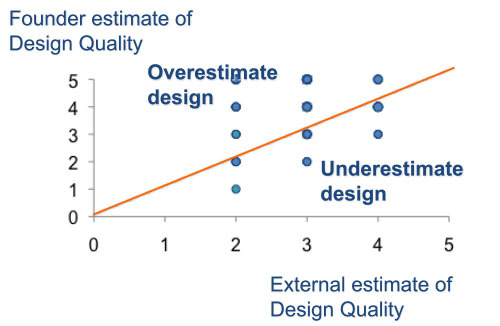 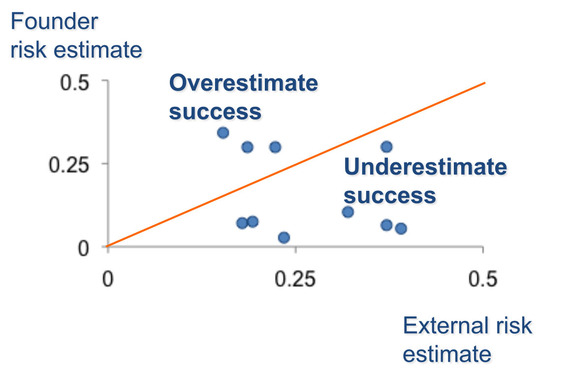 Again, this randomness is to be expected because they are exploring breakthrough opportunities with little evidence as to success. So the question then becomes how to moderate the founders' enthusiasm for their design performance.

Attendance at LA Tech Day offered the opportunity to assess twenty-six startups' design performance and to conduct in-depth interviews with ten of these startups. Three of them, Flashfunders, StartEngine and WeRehearse executed design especially well. They seemed to get the mix of positioning and execution just right by exposing themselves to risk levels comparable to the average risk-taking of Silicon Valley venture capital firms.

Larger differences are by nature easier to assess, which could be why design can be such a challenge to evaluate. As the design adage goes: "God is in the details!" Important for a startup's success, sensitivity to and balancing of the nine critical Design Quality Criteria, is where any founder needs to focus effort. So, how do our startups fare here? 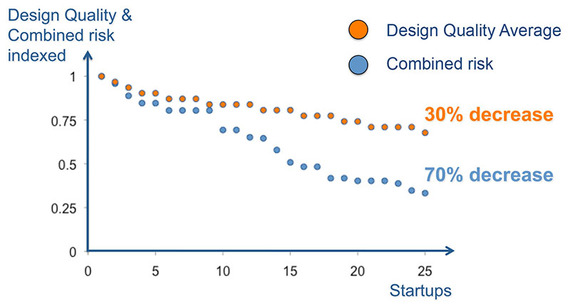 Flashfunders, an online equity crowdfunding platform, focuses on providing inexperienced investors with a seamless intuitive investment experience. They position themselves in the startup sweet spot for market -- technology risk. In so doing, they are clarifying an existing need while applying new technology. This keeps market-risk manageable while leveraging new technology to create intellectual property. Though overconfident in their performance on all nine Design Quality Criteria, they performed above average on most, falling below average on environmental concerns.

StartEngine is also an online equity crowdfunding platform focusing on Millennial investors -- tailoring the experience to these by having Millennial designers design the interface experience. Their position was also in the startup sweet spot and although noteworthy for being less overconfident, they performed average on most Design Quality Criteria, scoring below average on environmental concerns.

WeRehearse, an online rehearsal mediating service for actors, using international design talent to design their simple interface, also found the startup sweet spot. Even more realistic in their confidence level, they scored average on most Design Quality Criteria, being below average on environmental concerns and design expression/styling.

Focusing on the startup sweet spot and nailing the right design followed by sublime execution provides Design Driven Startups with a comprehensive competitive advantage. Participating startups proclaim that design represents over sixty percent of their valuation so focusing a significant part of their attention and energy on design can clearly make the difference between success and failure for founders.