There will be time to review the budget deal which was just struck by congressional negotiators in more detail. To that end, the open windows on my computer show the latest labor statistics and economic trends. But the phrase that keeps coming to mind, especially when it comes to the unemployed, is more than 200 years old -- 229 years, to be exact. And while its gender-specific phrasing may render it antiquated, the expression's meaning is sadly relevant in today's political world:

I know, I know. That's a pretty depressing thing to say. But let's look at the facts: Federal workers will be expected to subsidize this deal with an increase in their out-of-pocket pension costs. There will be cuts to Medicare. Airline passengers will pay a new tax. Military retirees -- military retirees -- will see their benefits cut.

And the long-term unemployed, who have paid dearly for Wall Street's excesses, will receive no extension of benefits. The sequester's cuts were disastrous, but this deal is needlessly punitive. It's mean-spirited toward people who are struggling through no fault of their own, people who have chosen a life of public service, and the middle class in general.

And presumably it will pass.

Ezra Klein says that "Democrats flatly got beat on sequestration. Republicans are keeping -- and increasing -- the deficit reduction without ever giving up a dime in taxes."  We agree with our colleague Dave Johnson: this was the ideal time for Democrats to take a strong stand, especially on behalf of the unemployed. And now the time has passed.

Still, this outcome isn't a surprise, and the basic contours of the deal have been reported for days. The dynamics of the negotiations have been pointing in this direction even longer. Despite their crushing political defeat after shuttering the government earlier this year, Republicans took a firm budgetary stand while Democrats seemed again to go soft.

The Freudian overtones in those words aren't accidental: a conservative group chose the words "stand firm" to describe its own position in a friendly news outlet. And Democrats like Sen. Dick Durbin might as well have been tapping out the gelatinous texture of their own position in Morse code when they said, as Durbin did Sunday, that the inclusion of an unemployment extension in the budget deal was not a "take it or leave it" proposition.

Durbin added, "I certainly hope ... that the negotiators will take to heart what the president had to say: there are working families across America that are struggling."

"Standing firm" versus "hoping": No wonder the Republican Party has set the terms of political debate for the last decade. The Right has been allowed to test its economic theories on the American people extensively. The results? Deregulation, which the GOP implemented the cooperation of many Democrats, dealt a harsh blow to the economy in 2008.

Wage suppression and loss of economic opportunity are crushing the middle class. Tax breaks for wealthy individuals and corporations, which were supposed to produce a trickle-down flood of jobs, led to eight years of stagnant job growth even before the 2008 crisis.

You'd think Republicans might express some remorse. Instead they are insisting that the public be subjected to more of the same. They're not even willing to extend mercy to the victims of their recklessness - the long-term unemployed who they would apparently rather see discarded than rescued.

The phrase "man's inhumanity to man" first appeared in a 1784 poem by Robert Burns. Burns called his poem a "dirge," a word which is defined as "as a song or hymn of grief or lamentation." In Burns' dirge an old man warns a young traveler about humanity's cruelty toward the less fortunate. One verse describes the hardship faced by the elderly person who is discarded for not being "useful to his kind."

Which reminds us: Don't even ask what they have in mind for Social Security.

The "better than expected" figures in the latest employment data were far below the level of job creation needed to put unemployed Americans back to work on any kind of reasonable schedule. It was even below the average monthly job creation during most of the 1990s. But it may have been enough to provide Republicans with cover for a cut they been pushing for many months - and timorous Democrats with an excuse to look the other way.

That's tragic. The jobs picture is still far worse than many people would have you believe. The current unemployment rate doesn't include the workers who have become discouraged and left the workforce, and workforce participation rates remain at historic lows.

The jobs numbers don't include the underemployed who are working part-time and prefer to work full-time. And, as economist Heidi Shierholz of the Economic Policy Institute explains, the ratio of job seekers to available jobs remains discouragingly high. There are no jobs for nearly two out of every three job seekers, no matter how hard they look.

For the long-term unemployed who have been abandoned by this deal, the statistics are even worse. 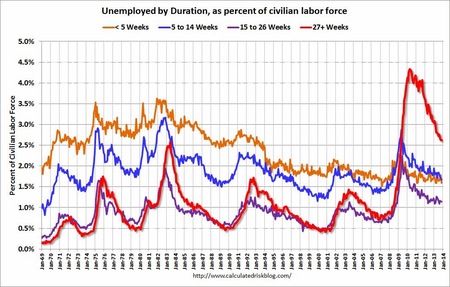 As this graph from Bill McBride at Calculated Risk shows, the employment picture for the long-term jobless remains dismal. And statistics only tell part of the story. They fail to show us the potentially soul-killing effects of long months and years without work. It would be understandable if the people whose lives make up that jagged red line felt discarded by the nation's leadership.

As the American Psychological Association reports, long-term unemployment is harmful to a person's physical and emotional well-being. The children suffer, too. The APA writes that the difficulties experienced by children of the unemployed include "more distress and depressive symptoms" as well as "academic problems, substance abuse, high-risk sexual behavior, physical health problems, impaired social relationships and increased risk of suicide."

The Washington Post's Dylan Matthews notes that most Americans are making less in real dollars than they were 10 years ago, while the top 0.01 percent is making 76.2 percent more. And yet this budget deal - which demands sacrifices from federal workers, military retirees and Medicare enrollees - includes no tax increases for high earners, even as families coping with long-term unemployment are scheduled to take another financial hit.

Democrats say that they'll keep working for an extension of unemployment benefits. Let's hope they succeed, although so far haven't shown anything which might be described as steely-eyed determination.

In the meantime, we'll keep thinking of the millions of unemployed Americans who were left out of the cold by this deal - and about the sad relevance of a phrase which first appeared 229 years ago in a Scottish poet's dirge.