It's a classic tale of a UFO cover-up: Extraterrestrials invade a military base, soldiers battle the ETs, then press officials and government agents explain away this interplanetary conflict with lies involving weather balloons and military test flights.

The Bureau: XCOM Declassified, a video game released Tuesday, lets you do just that. Set during the Cold War, The Bureau allows you to play the role of a United States government agent, using your tact to thwart the alien occupation while also weaving a web of lies for the public.

Peculiar, though, that a game about UFO conspiracy came out within a week of the federal government's declassification of Area 51 documents. It's even weirder that the man heading the public relations side of the game's release is Nick Pope, the former head of the British Ministry of Defence's now-defunct UFO desk.

So The Bureau must be a government ploy to steer our fragile minds away from the real Area 51 and more toward the creepy, unbelieveable aliens that inhabit pop culture, right? The Internet seems to think so. During a promotional interview for the last game in the XCOM series, Pope told reporters that Britain had weapon capabilities specifically geared toward an alien invasion.

Message boards were quick to point at Pope's government ties.

"[Is this] a green light for alien propaganda?" wrote one user.

"Mr. Pope cannot tell full truths, as it is with many [government] employees," another added. "There are pieces of truth within his statements."

"They say I didn't really leave the ministry in 2006," he said. "They say, either this game is designed to throw people off, or it's part of a climatization process. Somehow I'm helping governments use this as a way of slowly getting the message out: They're here, but don't panic."

Are Pope and The Bureau's publisher, 2K Games, part of a government conspiracy? Probably not. More likely, Pope is simply a former government worker getting paid by a studio to be spokesman for a video game. 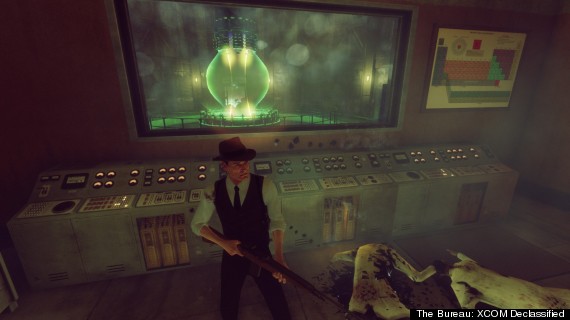 That's what they want you to think.

In fact, the government is involved in video games, but it isn't very secretive about them. America's Army, a first-person shooter funded and released entirely by the U.S. Army, is a known recruiting tool that shows off -- to gamers -- how cool a job with the military can be. Minus the death part.

Then again, if Pope was really lying about his intention to confuse the public with the release of a video game, he might say things like this:

"We didn't plan to match up the game's release with the declassification of Area 51 material ... I'm not a gamer myself, I'm not involved in the development side. My role is to engage with the gaming community and bridge the gap between UFO enthusiasts and gamers."

It should be noted that The Bureau is a relatively solid real-time strategy shooter with a compelling storyline. Pope claims that the United States government was fine with the UFO rumors spreading during the real Cold War, because it was actually testing U-2 spy planes. The Bureau's storyline delves into broad topics like these about government cover ups, and any gamer interested in UFO lore will stay interested.

For more in-depth reviews of the game's mechanics, visit GameSpot or IGN.