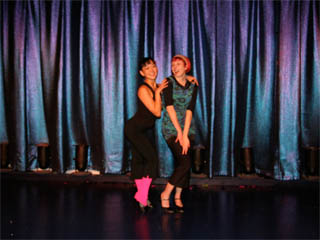 I think every girl secretly wants to try burlesque. You get to strut around in rhinestones and red lipstick, winking and looking surprised as your undergarments just inexplicably keep falling to the floor. As someone who loves vintage everything, and still dances the mashed potato at hip hop clubs, I figured I would be perfect for burlesque. I have old-timey charm. I have razzle-dazzle coming out of my ears. I'm ironic about every aspect of my life. And I have tons of experience taking my clothes off: I do it nearly every day. Put me on the stage, I'm ready!

Now is probably a good time to mention my stage fright, especially when it comes to indecent exposure. I just don't think my boobs are exciting enough to warrant showing a handful of people in an alley, let alone unleashing them from the stage upon a whole crowd of paying customers. What if they demand their money back? But that's the other reason why ladies try burlesque: to get over their insecurities.

Midnite Martini & Friends Burlesque Booty School (here on out referred to as "booty school") is a six-week course held each Sunday afternoon in the infamous Lannie's Clocktower Cabaret. Midnite Martini, booty school professorial type and striptease performer extraordinaire, just happens to have a background as focused on dance as it is on making ladies feel good about their mediocre racks. She was an ice skater, then a dancer, but she became disillusioned by the scene because of the strict body image standards, resulting in her suffering from an eating disorder. She said farewell to la dance and went into psychology, and finally returned to dance years later in the form of aerial dancing and burlesque, which are a) fucking awesome, and b) accepting of all shapes and sizes of womanhood. You can tell she was meant to do this, commanding groups of ladies to feel themselves up ("especially the parts you're not wild about!"), cat-calling them while they strut onstage, and peering through her librarian spectacles at her laptop (probably reading psychology journals?) during the breaks. She's also really good at taking off her stockings with her teeth while hanging upside-down and doing the splits.

A colorful assortment of ladies were milling about before class at Lannie's that afternoon: a leggy ostrich of a girl who used to be a Vegas showgirl; a blond pole dancing instructor who looks like she'd be at home on Rock of Love and simply could not wait to get naked; a shy MILF looking to become more comfortable with her sexuality; a sweet yoga instructor with salt n pepper hair who was just bursting with life; a fire twirler with crazy blond braids and a vaguely futuristic Fifth Element vibe; and the rest of us, who were medium-normal twenty-something gals. Everyone was really cool. The only surprise was the amount of football talk flying around: Midnite looking up football scores and yelling them to the stage during the choreography portion; girls burlesqueing in their team's football jersey. What depths of gay sparkly culture will I need to immerse myself in to finally escape sports?

Our first exercise was to stand onstage in front of everyone and introduce ourselves while standing in the spotlight. It was deceptively difficult. One might volunteer straight away, for example, only to have her confident strut and entire story sandblasted away by the blinding spotlight that gives the illusion of being very large and about five feet away. You have to speak to a crowd whose judging faces you cannot see, and the spotlight feels like this uncomfortable light-at-the-end-of-the-tunnel death exercise, and then you have to feel your way off the stage without falling, which is not a very razzle-dazzle way to make an exit.

Then we got into heels and practiced different ways to strut onstage to suggestive-trumpet music on the boombox. Of course the Vegas showgirl and pole dancing instructor were the first two in line, and they made everyone else (or at least just me) feel like as attractive as a middle-aged bald dude. They were total champs at sexy strutting! We learned that there is a sultry strut where you drag your feet (dangerous in heels! beware); there is also a quick'n bouncy flirtatious strut, which I thought would be my thing, but I have to say I was surprisingly more of a fierce man-eating kind of strutter. Then our next step was to strut to the middle of the stage and just pause for three seconds, without moving. This was mostly an exercise to make us feel comfortable onstage, but many in our group of saucy broads used their moments in the spotlight to preen. I, for one, froze like a deer in headlights, unsure which expression to plaster onto my unworking face (probably not "angry"?), as did a few of the other girls. Midnite was kind enough to say that sometimes it's the moments when you're caught off guard and vulnerable onstage that are the most beautiful. Yay for us!

Then we reached the choreography portion of the class, where the legendary Honey Touché came to teach us about counting out a song into smaller, easier-to-choreograph pieces, and she even taught us an entire choreographed dance, including the parts where you take off your bra and then turn around (we only mimed those parts -- they wait for the second date to unleash the nudity).

Well, it turns out that this was my favorite part of the class! Sure, there were moments where I went left when everyone else was going right, but if you screw up in burlesque you can just giggle and it's okay! I learned "the bump," "the grind," "the shimmy," "taking off the glove," and other popular burlesque staples. All the moves were sexy, but not so much as to make anyone feel gross -- more hip-shaking than outright stage-humping, as you would expect.

Here are some handy tips to being the best burlesque dancer you can be: create an inner dialogue while you're performing onstage that harnesses your persona, i.e. "I'm a peacock!" or "I'm a sexy robot from the future!" or "I'm a slutty farm girl looking for a rich guy!" or "I'm a sexy banana!" (hey, I've actually seen a sexy banana do burlesque before). Practice the art of striptease while you're getting undressed in your everyday routine -- why waste the opportunity? Onstage, look over peoples' heads if you're too nervous to make eye contact, and always imagine a really rich guy in the crowd. When coming up with your stage name, just pick stuff you're into or, if that fails, your first pet + street you grew up on will suffice (which would make me Gizmo Alexander, at your service).

Future classes in the six-week session include learning to make tassels and pasties, tassel-twirling ("nothing bonds a group of women like tassel twirling class" says Midnite), guest lessons by Honey Touche, Fannie Spankings, Peggy Tulane, and Tatianna TaTa, and how to make your burlesque costume. All of this unbearably-sexy sauciness culminates in a burlesque performance February 19th at Lannie's, starring the students, and it is open to the public. Students' participation in the recital is optional, so you can take a deep breath if you're planning on taking the class.

Speaking of which, the next session starts in June, and you just might see yours truly as an officially-enrolled student. And if you haven't yet, check out the burlesque, comedy, singing, and hilariously entertaining variety shows going on several times a week at that Lannie's on the 16th Street Mall.