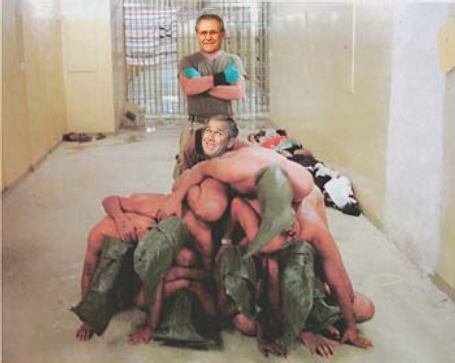 Let the rewrite begin. So far Bush has gone from 24% to 28% approval. Mission accomplished for Karl (Rove) and Karen (Hughes)? Not quite, so they've brought in the big guns. Hey, since it worked for the Iraq war, maybe lying will work for George W. Bush's legacy.

"At Least Bush Kept Us Safe" is the one headline I've been waiting to see. That it comes from Peggy Noonan is so very fitting. But the subheading is the GOP's secret hope: The two words Democrats don't want tacked onto that sentence. Guess the two words. Consider this just another part of the Bush legacy project.

The reality is that George W. Bush has pushed this country to a precipice where the dangers are far greater than when he came into office, with the threat of something far worse than what occurred on 9/11 a reality. That's because he'll be handing off the most unstable world environment we've had in a generation, much of it a direct result of his presidency.

"A commander in chief leads the military built by those who came before him." - V.P. Candidate Dick Cheney (campaign 2000)

On the military side alone, George W. Bush has, in eight years, dismantled the U.S. force structure because of redeployments and overstretch that it will take years to reestablish balance, though much longer to bolster the ranks. What Bush has done to military families is another part of his legacy.

The divorce rate among soldiers and Marines increased last year as military marriages suffered continuing stress from America's two ongoing wars. There were an estimated 10,200 failed marriages in the active duty Army and 3,077 among Marines, according to figures obtained by the Associated Press for the budget year ended Sept. 30.

That's a divorce rate of 3.5 percent among more than 287,000 married troops in the Army, up from 3.3 percent in the previous fiscal year, according to Defense Department figures.

Obama is inheriting a United States that is weaker in the world than at any time since 1980.

Obama is inheriting an economy that is weaker than any time since the Great Depression.

Obama is inheriting a U.S. government that is in bailout mode for financial institutions, homeowners, and the once great car manufacturing sector left in the U.S.

Obama is inheriting a U.S. that still does not have an energy policy.

Obama is inheriting Bush's national security nightmare, with his team taking over an almost impossible task. Clinton having to reinvigorate diplomatic efforts from rock bottom, while Jones and Gates try to once again make sense of NATO's role in Afghanistan, but also its core mission in a world where borders aren't boundaries.

Obama is inheriting a Middle East situation that was left untended for two terms.

Obama is inheriting an increasingly unraveling situation in Afghanistan, which Bush allowed to happen.

Obama is inheriting a revived Russia, who had Bush nailed from the moment he saw into Putin's soulless eyes.

Obama is inheriting Bush's Musharaff policy in Pakistan, which sees that country on the precipice of becoming a failed state.

Obama is inheriting the rising militancy of Uzbekistan, which could cause Central Asia to ignite at any moment.

Obama is inheriting a relationship with China that has its financial leader warning the U.S. in no uncertain terms: "Be Nice to the Countries That Lend You Money."

Peggy Noonan is doing Karl and Karen's bidding by jumping into the Bush legacy project, while leaving out George's real legacy. What he is leaving to his successor, which is directly related to what shape America is in because of the presidency of George W. Bush, but also what his presidency has done to the American brand around the world, particularly in the realm of national security, diplomacy and what the dangerous world he leaves his successor.

"At least he's kept us safe" is not only a lie, but it reveals the shoddy analysis of a partisan unwilling to come to grips with George W. Bush's catastrophic failure as an American president, the problems of which President Obama will be the sole recipient.

On national security, Bush has not only left us in dire straights, but pushed the world to the brink.

Since 9/11 the IMU (Islamic Movement of Uzbekistan) and other Islamic extremist groups, some of them linked to al Qaeda and the Taliban but others quite independent, have develped a strong underground base inside Uzbekistan. Since 9/11 hundreds of young Uzbek militants have traveled to Waziristan for training and have fought in Afghanistan, Pakistan, and Iraq. [...] After 9/11 no more than five hundred to six hundred Uzbeks were taking refuge in Pakistan's tribal areas. By 2008 that number had grown to between three and four thousand Uzbek and Central Asian militants int he tribal areas under IMU command... new splinter groups such as the Islamic Jihad Union, wihch worked directly under al Qaeda, had also appeared. {... ..} In 2001 the United States held a pivotal position in Central Asia, yet five years later it was forced to yeild that position to Russia and China. Ultimately President Bush was responsible for losing Uzbekistan and Centra Asia, as the U.S. administration pursued one-track policies that put torturing prisoners above the need for nation building. ..

"At least Bush kept us safe" is just the latest lie being passed by the Bush administration and their hacks, using the same cherry picking, fales intelligence platforms, and out right falsehoods we've come to expect from Bush propagandists, on behalf of a man who has left this nation and the world we lead a far more dangerous place than when he found it.

Whatever happens in the next few years on Obama's watch will be a result of George W. Bush's presidency. That is unless Peggy Noonan, like Karl and Karen, think Obama really is the Messiah, able to spin presidential gold out of Bush's serial incompetence.