A recent Pew Research Center poll found that the one word Americans used most to describe President Bush was "incompetent." While no compliment, the word fails to convey the condemnation warranted by the last eight years.

There are several words that are more apt, such as "betrayal." Consider the administration's handling of the California "energy crisis." Two months into the administration and at the height of "crisis," the administration learned that the soaring prices were caused by market manipulation -- a potential setback for Vice President Cheney's energy task force whose recommendations would include California-style electricity deregulation. Forced to choose between mitigating what would ultimately be a $45 billion loss to Californians or serving Enron and other cronies, Cheney chose to serve the cronies and ordered that this information be sealed. Even worse is that the administration continued to blame the "crisis" on California's environmental regulations. 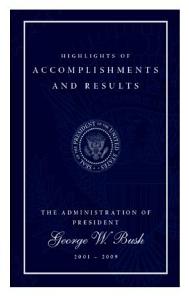 something for cronies to feed on and not something provided for the benefit of the people. This simply is a recipe for failure as we saw with Iraq, Katrina and the current financial crisis.

President Bush weakened or abandoned industry regulations while opening the government trough for corporate looting; doubling the amount spent on government contracts to $412 billion and tripling the amount spent on no-bid or limited competition contracts. This resulted in over $1 trillion in contracts marked by significant fraud, waste or abuse not to mention the $8.8 billion in cash that simply disappeared in Iraq. The most infamous looter, Halliburton received over $130 billion in contracts under Bush and overcharged the government $100 million for a single day's work.

This was merely the appetizer, as Bush abandoned "a strong tradition of wartime fiscal sacrifice" and pushed through $2.6 billion in tax cuts (which one Republican insider said was the "least defensible" economic policy he had ever seen). This giveaway has yielded little return on its investment and for most taxpayers any benefit was offset by higher state taxes and tuition, higher employee heath insurance premiums and gas costs not to mention their share of both the increase in the federal debt (which for a family of four would be $64,000) or the $2 trillion in retirement savings lost in the stock market crash.

Bush also betrayed his oath of office to uphold the Constitution. The conservative Cato Institute characterizes Bush's record as "overwhelmingly one of contempt for Constitutional limitations," as Americans were subjected to indefinite detention and wiretaps while the White House assumed imperial powers through signing statements that the President could disregard acts of Congress.

Just as significant, however, was Bush's betrayal of the public trust and subversion of the democratic process by consistently concealing information and misleading or outright lying to the American people. This was especially true with Iraq where one study identified 935 false pre-war statements made to gain support for an unnecessary war that diverted resources from the fight against Al Qaeda and the Taliban in Afghanistan and seriously damaged our global standing.

Another appropriate word is "catastrophe." The total costs of the Bush tax cuts, the Iraq War, the financial bailouts and contracting fraud and abuse are approximately $7.9 trillion -- which is twice the cost of World War II in current dollars. To put this in context, according to 3trillion.org, this money instead could have been used to fully fund the social security trust fund, repair our critical infrastructure, implement the recommendations of the 9/11 Commission, provide universal health care and internet access and procure five stealth bombers while giving a private jet to every Governor and member of Congress... and still have more than half the sum left. That is where we could have been had Bush not been selected as President.

This sum does not account for the nearly 35,000 soldiers killed or wounded in Iraq or deaths that might have been prevented had Bush responded to warnings on 9/11 and Katrina. It also does not account for the additional 4,000 premature deaths each year due to lack of health insurance; the administration's contribution to the 70,000 annual deaths due to air pollution; or the workers, consumers and children killed or injured due to lax workplace, food and toy safety regulation.

The final word is "nightmare". How else can you describe the descent to Guantanamo Bay and Abu Ghraib, the loss of civil liberties, the abandonment of a major American city and a nation on the brink of a depression? The first President that Dick Cheney served took office assuring the nation that "our long national nightmare is over." The same statement would be just as fitting and welcome on January 20th as the incompetent, betrayal, catastrophe and nightmare that was the Bush administration finally comes to a close.