There's no such thing as a free lunch, and there's no such thing as an honest case for extending the Bush tax cuts. Ten years of hard data prove they were a complete failure. They did not work while Bush was in office and they did not work during the first two years of the Obama administration. No wonder the Congressional Budget Office says that the GOP's proposed extension of tax cuts to the rich will reduce future economic growth.

In terms of promoting economic growth, the Bush tax cuts were a complete failure.

Under George W. Bush, U.S. GDP growth averaged about 2.1 percent a year. Since the end of World War II, the country has never experienced such low economic growth during an eight-year period. And if you exclude the war demobilization of 1946, when U.S. government spending fell by two-thirds and the GDP fell by 10.9 percent, Bush had the worst economic record since Herbert Hoover. During FDR's first two terms, when the country remained mired in a Depression, GDP growth averaged about 6.3 percent a year.

There is no way to make Bush's performance look good. Even if you cherry-pick the data, by excluding fiscal year 2008, when GDP growth was zero, economic expansion was anemic. During Bush's first seven years, it averaged about 2.4 percent, the worst rate in half a century. And what was the source of most of that economic growth? Homeowner equity extraction. Bush could point to one sector where growth outpaced that of all prior administrations: Residential mortgage debt. It almost doubled, from $5.1 trillion to $9.8 trillion, between 2001 and 2006.

Of course, these numbers understate the magnitude of Bush's failure, since the full effects of the 2008 financial meltdown were not felt until 2009 and later. Though Bush has left the White House, his tax cuts have remained in place. What's completely missing is any evidence that his tax cuts did anything to boost the economy.

After Clinton raised taxes on the rich, GDP growth spiked. His eight-year average was about 3.9 percent, close to twice what it was under Bush.

In terms of promoting job growth, the Bush tax cuts were a complete failure.

By the end of eight years of George W. Bush's economic stewardship, 1.1 million jobs had been added to the economy. Measured against any of his predecessors, Bush was a complete failure. Clinton added 22 times as many jobs. Reagan added 16 times as many jobs. Eisenhower added three times as many jobs, when the U.S. economy was a fraction of its current size.

Even prior to the financial meltdown, Bush's record of job creation was dismal. The economy started hemorrhaging jobs in June 2008, but from the end of January 2001 through May 2008, the U.S. economy created five million jobs. That's less than 700 thousand jobs a year, the worst performance, over a seven-year stretch, since the early 1960s.

Of course the job losses that began in 2008 accelerated into 2009 and onward. You can ascribe the blame to Bush or to Obama. But you can't point to any evidence that the Bush tax cuts actually added jobs in the past two years. The reasons are obvious to anyone who understands how companies make their hiring decisions. They hire because they expect their business volume to grow, or because the current workforce cannot handle the tasks at hand. Does anyone really think that a small business owner who nets more than $1 million a year -- say, a plastic surgeon, or a hedge-fund manager, or (Justin) Bieber Time Touring LLC -- would hire more employees simply because the tax rates were slashed after the end of the Clinton Administration?

By the way, the Clinton administration created about three million more jobs than the administrations of Ronald Reagan, Bush I, and Bush II combined.

In terms of fiscal prudence, the Bush tax cuts were a complete failure.

Guess what happened after the U.S. economy came out of a mild recession that ended in November 2001? U.S. tax revenues plummeted. They plummeted at a rate that was unprecedented since the demobilization after World War II. And they plummeted during a time when Bush initiated a war that would leave us mired in Iraq for more than seven years.

Historically, U.S. income tax revenues have always grown, year after year. The problem was that government expenditures always grew more. So when revenues started falling, the relationship, between what the government took in and what it spent, really got out of whack. 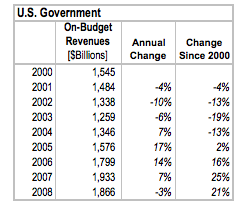 Government revenues fell three years in a row, well past the end of the last recession, while government outlays increased at twice the rate seen under the Clinton administration. Again, Bush set a record for modern times. We also know that the burst of revenues from 2005 onward was traceable to asset bubbles, which were not sustainable. In the last budget he submitted to Congress, Bush assumed that the cost of military operations in Iraq and Afghanistan after 2009 would be zero.

Bush's failure was masked by a sleazy accounting trick that Bill Clinton had tried to stop in 1999, when the government's operations approached break-even.

The Social Security surplus is supposed to be invested in Treasuries, which generate compound interest to build up a nest egg for the day when baby boomers start retiring. Of course a real Treasury instrument is a legal promise to pay. So Bush took the cash paid out by you, me and our employers into the Social Security "Trust Fund" and used it to reduce his current operating deficits. Instead of exchanging the cash for real Treasuries, the Trust Fund bought "Special Treasuries," which the government can change at will. USA Today said it best:

The Bush administration opposes including Social Security and Medicare in the audited deficit. Its reason: Congress can cancel or cut the retirement programs at any time, so they should not be considered a government liability for accounting purposes.

Scam artists like Mitch McConnell justify their talk about "reforming" Social Security by pointing to "unfunded liabilities." This nonsense about unfunded obligations is one of the biggest frauds of the 20th and 21st centuries.

Social Security was funded by you, me and our employers. Bush took the surplus funds and used them to subsidize his failed tax policies. The Trust Fund's liabilities are unfunded for one reason and one reason only: Bush, more than any other President, defunded them. Because Republican politicians can't handle the truth, they cry out, "Class warfare!" But all their screaming cannot alter the immutable rules of simple arithmetic. Now they want to double down on their past failures.