"Being good in business is the most fascinating kind of art," Andy Warhol famously said. "Making money is art and working is art and good business is the best art." Having gotten his start as an immensely successful commercial artist selling product illustrations to advertisers and department stores, Warhol bent the American consumerist system to artistic ends throughout his career -- embracing capitalism at a time when many in the creative sphere viewed it skeptically, if not with outright hostility. Now a new exhibition at the Indianapolis Museum of Art called "Andy Warhol Enterprises" has seized upon a recent resurgence of interest in the artist's work to closely examine just how Warhol treated business, commerce, and, above all, money in his art and life.

At an economic moment when the art market is booming -- with a Warhol painting selling for $63.4 million at Phillips de Pury last month -- as the rest of the country struggles through a grueling recession, wealthy businessmen have been demonstrating extraordinary confidence in art as a liquid financial asset. Warhol, it could be said, took the opposite approach -- he saw business as a dependable artistic asset. To discuss the ways in which the Pop artist approached this sweeping subject, ARTINFO executive editor Andrew M. Goldstein spoke to the exhibition's co-curator Sarah Urist Green, who organized the show with art critic Allison Unruh. 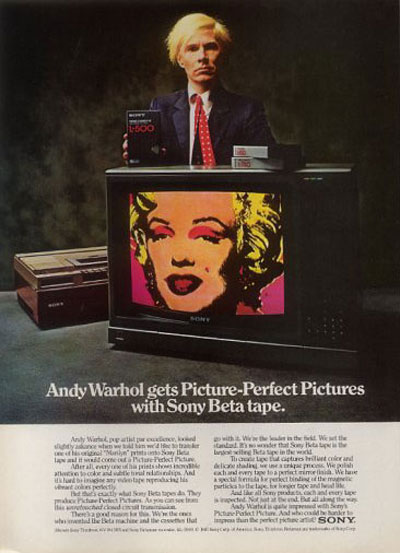 One of the interesting things about your exhibition is that it is sponsored by PNC Bank, which is in itself a commentary of a kind on the relationship between business and art.

When I got a call from Max Anderson, our director, asking if I would be interested in curating a show in conjunction with PNC bank and the Warhol Museum, my first reaction was a little bit hesitant. But I thought, "Warhol certainly wouldn't mind having a show sponsored by a bank. He would probably have really liked it." And I love the fact that Warhol had the corporation Andy Warhol Enterprises -- it has always stood out to me as a really fine example of Warhol as an entrepreneur -- and Andy loved money. So I though lets do a show about Andy loving money, but in a critical, engaged way.

Did they have any part in coming up with the show's conceit?

No, this is something that we pitched to them. And they loved it. I especially thought it was hilarious that for once we would be able to even flaunt a sponsor's name and logo in conjunction with the exhibition. Whenever we were creating collateral for the show I was able to say "don't forget the logo" and "make the logo bigger."

The exhibition catalogue shows Warhol as a shameless self-promoter, even appearing on Japanese film ads like the cliché of Bill Murray's character going to sell Japanese whiskey in "Lost in Translation."

That's perfect, right? But he was doing that from the beginning. Something we didn't have an image of in the catalogue but that was always in my mind in developing the show was the classified ad he put in the Village Voice in 1966 that said, "I will endorse with my name any of the following" and then it was just a list of all of the things he was happy to endorse, which included "anything." So he was a bit of a whore, as it were, from the beginning. One of the ideas that we have really tried to work against in this exhibition is that there was a turning point in Warhol's career -- this idea that before he was shot there was a certain integrity to his work and after a turning point it all dissipated and he became a servant to celebrities and society members. I don't believe that that is true. He even said later in his career, "I was always a commercial artist."

That is so interesting because that recent biography of him, Pop: The Genius of Andy Warhol, ends when he was shot in 1968, essentially condensing the last two decades of his career into a few paragraphs, largely dismissing it as commercial work.

I know. It's a great book, it's excellently researched, has great material, but it just ends! He was shot in 1968 but he didn't die until 1987. It is really incredible that that perception persists -- I mean, it is really prevalent, especially, of that generation. This exhibition is one of several in the past few years that is re-examining his later work including the "Last Decade" show and "Pop Life." These other exhibitions are looking at his later work in a fresh light. But I feel sometimes that the members of Warhol's own generation, or the people who were there, were sometimes clouded in their judgment and unable to see the irony of his later work.

Oh, no. You have seen pictures of them at their desk in their studios, maybe sitting with desks or papers or tables behind them, or maybe at a computer, but not this -- in such an officious role! I love that photo. It hasn't been published very much, and it was really important to us to include it. There is actually another version of this photo that is backed up a little more and it shows that, to the right of the telephone, there is a TV facing him.

The essays in the catalogue present Warhol as this businessman sitting behind a desk, running Warhol Enterprises, concocting a new moneymaking scheme every day, wearing a tie, and flying by Concorde. And it certainly worked: the final valuation of his estate was $228 million.

That's correct, though I'm not sure exactly how the Warhol Museum came to that figure. I am pretty sure that it is the valuation of his work at the time of his death plus all of the other art work he collected, because he had quite a collection of decorative art and some work by other artists, as well. Also, it includes his real estate holdings.

Exactly. In the exhibition we have a portfolio that says "Andrew Warhol Enterprises Inc." on the front and it sort of goes through the value of his estate in 1965, and lists artworks that he owned -- some small Rauschenberg works and other items. But he did amass quite a bit of wealth in his days. Even in the 50s, in the first decade of his career, he did amazingly well as a commercial artist. So he was very well off even before he became famous.

[Laughs] As a boss? Well, we interviewed Vincent Fremont in the catalog and that is one account of many accounts, but at a certain point in my research it became unhelpful to read the accounts of everyone who worked for him. The people who were very close to him seemed to love him, like Pat Hackett [Warhol's secretary]. While they had not an uncomplicated relationship with Warhol, they certainly had extreme fondness for him. But then you read accounts like Bob Colacello's "Holy Terror" and you see a different side but one that is cited often, the flip side of Andy Warhol, where while he could be incredibly encouraging to other people, to other employees, other artists, he was also pretty cruel in certain regards as well.

What fascinates me is that while he presents this image as a business man -- "the business artist" -- his own management of his affairs was much more like an artist. He hardly paid anyone except with drugs, or parties, or the occasional lunch money.

Part of Warhol's brilliance at an early age was getting people to help him for free. In the 50s he would have these coloring parties where he would invite his friends to Serendipity 3 to help him hand-color his blotted line drawings, and he had his mother help him as well. He certainly had paid assistants, too. All of his films made it look like people in the factory were just sitting around, but he was certainly very good at getting people to work for him for free, and I'm sure it was mutually beneficial. It turned from the "Factory" into the "Office", and his staff members grew as his life progressed. But he certainly did know how to run a business and get the most out of his employees.

Did they have health care? Or anything like that?

I don't know, but there is a great Warhol quote: "Employees made the best dates. You don't have to pick them up and they are always tax deductible."

It is funny to think about how much of a chaotic mess his workplace was.

Well, you see the time capsules, and you get a small glimpse of his business life because the time capsules were basically his sweeping off his desk every so often and putting it in a box. And if you go to the Warhol Museum archives and you take a peek in those time capsules, it is really astounding the amount of stuff that almost anyone would throw away that Warhol kept.

What stands out in your memory?

Ticket stubs, taxi receipts, small notes about his finances. If you look in his diaries, you will see that the "Andy Warhol Diaries" actually originated because his accountant wanted him to track his daily expenses, and then it expanded from there. But it will say "taxi, 3 dollars" and so on. That is in the "Andy Warhol Diaries" that Pat edited. He would call her in the mornings and she would transcribe his day-to-day activities for many years. And some of them... I mean, it's funny, but pretty tedious at a certain point. He will say who he went out with the night before, who was at Studio 54, et cetera. They also found in the time capsules over a thousand dollars in cash that he just stuck in one of the boxes. I tried to get that for the show, actually, but I think they gave it to the Warhol Foundation.

Visit "The Business Artist: How Andy Warhol Turned a Love of Money Into a $228 Million Art Career" on ARTINFO for the rest of Andrew Goldstein's interview with IMA curator Sarah Urist Green about the themes in her probing exhibition, including a discussion of Warhol's role as Factory foreman, his money paintings, and his vulgarity, and to see a slide show of Andy Warhol's most famous money-making works.

Visit ARTINFO to see some of Andy Warhol's most famous money-making works.