As the contentious immigration reform discussion continues, I am astounded by the average person's reservations about immigrants' creativity -- along with lamentation about why we need any immigrants while there are plenty of locals.

But one does not have to be a rocket scientist to comprehend that this reform is all about American fitness, survival of the fittest, and the U.S. sustainability in competitive global economy. To achieve those goals, we need to exercise our famous American innovation muscles, using every available means -- including tapping the strengths of immigrants. This is why we need to make a consistent business case for harnessing immigrant creativity.

We also need to bring up the missing aspect: immigrant women leaders' creative contributions to our society.

Let's explore immigrant creativity: First, even if creativity is a gift dealt to us at random, what factors/dimensions can boost it? Solid research on creativity explains why some people are more creative than others: they can see the world from multiple perspectives or "live in two worlds." Immigrants naturally bring this bicultural vision into their creative pursuits.

Second, Nigel Barber in his article, "Secret of Creativity: An Oblique Perspective," noted that being an immigrant is one of the three most frequent causes of this "otherness." (The other two are being androgynous or gay and being seriously challenged or sick as a child.)

Thus, immigrants can see things through several filters and find multiple, or even opposing, connotations in the same event.
Here's a closer look. 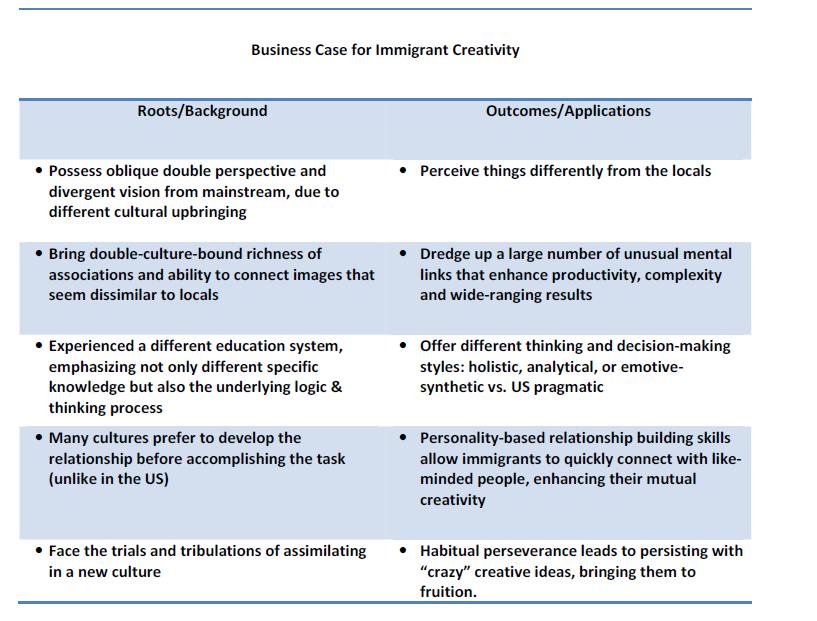 This supports Nigel Barber's remark that creativity is more environmental than genetic -- so probably talent cannot be cloned easily but we can cultivate it, which sounds reassuring.

I'd like to add a nuanced but important dimension to immigrant creativity: being female -- the immigrant's creative dual perspective becomes an even more creative triple perspective, adding gender-specific sense and sensibility.

Here are three examples of HOW immigrant women leaders cultivate their creative potential as they enrich the all-American culture and well-being, the art of the matter:

• Kerry Bannigan from Britain: appealing to the sense of equal opportunity in fashion world.
British-born but loving America with her every fiber, she became a New York patriot the very first year she arrived. The stimulating atmosphere of the city conditioned Kerry's creativity. Noticing that not everything is fair in this fair country, she co-foundered Nolcha, an award-winning creative events agency working throughout USA and UK, focusing on fashion, beauty, and lifestyle brands. Nolcha Fashion Week, run concurrently with its famous rival, Fashion Week, provides opportunities for 100+ independent fashion designers who have great ideas but no easy access to posh runways--thus creatively mending a hole in equal opportunity. Kerry may well be a new Anna Wintour (of Vogue), only more democratic--as appropriate for the 21st century.

• Véronique Anne Jadot from France: appealing to the sense of beautifully balanced world. Véronique used to be a sickly struggling child following life's traditional path -- until she noticed some beautiful poppies along the country road and tried to reconstruct them at home. The family did not support her artistic aspirations, nor did the rigid French salons whose prime criterion was belonging to a certain "school." Soon after relocating to New York, Véronique said: "I found the values here that I couldn't find in France. People recognize me through my unique art." Isn't it amazing that Paris, a former Mecca of creative artists, now gives way to New York? Her LivenLuLu collection harmoniously blends textures and colors to depict a world of serenity and freedom that "has no color, religion, nor social class"; she wants her art to open the minds and change the world. Good luck, Véronique!

• Maricel Priscilla from Cuba: appealing to the sense of imagination and taste buds.
Young Maricel never cared whether she wore a new dress or one from the Salvation Army; learning and sharing knowledge was her focus for life. Her doctorate in medieval Spanish history led to a career as a culinary anthropologist who traveled throughout Latin America digging archives for authentic recipes. Her encyclopedic Grand Cocina Latina was creatively applied at Cucharamama, her restaurant in Hoboken, NJ, which features artisanal South American delicacies. This won her a James Beard award for Best Chef and brought her to the White House as the first Latina guest chef. Maricel's creativity has a Midas touch to it, transforming everything she's doing: teaching at Rutgers, hosting a radio show, founding the Gran Cacao company, or cooking to delight our taste buds. She does it her way!

The genderless immigration reform does not care if you are in double trouble being an immigrant and a woman: you wanted to become an American -- it's your business to swim or sink. By the same token, it is the country's big choice to swim or sink in terms of prospering in the globalized economy where creativity really counts. The business case is clear about what we get "importing" talented men and women -- if you want your investments to be safer -- diversify!