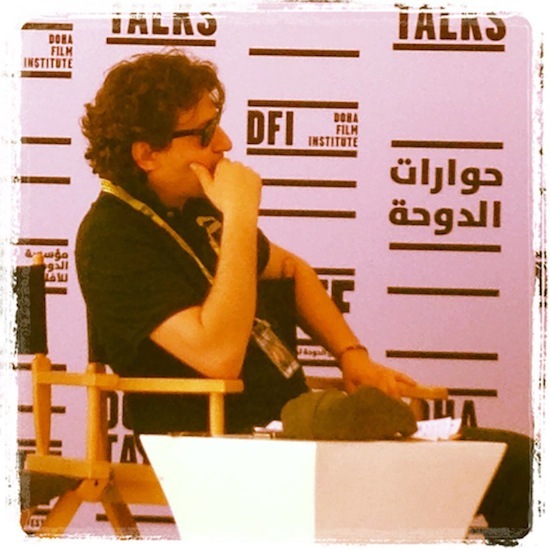 Undeniably, this has been the strongest year yet for Arab cinema. Hany Abu-Assad's Omar went to the Oscars, as did Jehane Noujaim's The Square in the feature documentary section and Sara Ishaq's Karama Has No Walls as a short doc. Representing Palestine, Egypt and Yemen, respectively. Even Saudi Arabia has come to the game, with its first feature by a woman filmmaker, Haifaa Al Mansour's Wadjda, which broke all kinds of records and barriers.

Yet, as Rushdie so powerfully states in his quote above, for every great achievement, there is always a step back. A snake lurking in the grass. And this is no different for my beloved MENA. At no other time has the region been so chaotic and positive at once.

And at no time has its cinematic industry ever been so laden with possibilities.

As Cannes fast approaches, I look forward to watching some incredible films and catching up on world cinema. But alas, this year's 67th edition of the festival offers little in terms of Arab cinema. The Aftermath of The Inauguration of The Public Toilet At Kilometer 375 is the groundbreaking first student film from Egypt to be included in the Cinefondation, and Challat of Tunis screens in the ACID program. There is a documentary about Syria titled Silvered Water, Syria Self-Portrait screening out of competition, Snow in Paradise from the UK which deals with a man finding peace through Islam and a few little tidbits here and there. But, to quote Dickens, "It was the best of times, it was the worst of times."

A few months ago, for Abu Dhabi magazine Shawati', I caught up with Gianluca Chakra, the talent and mind behind Front Row Filmed Entertainment, one of the leading distributors in the Middle East. Front Row distributes everything from Hollywood fare like Rush, to indie greats like The Double, this year's Oscar winner for best foreign language film The Great Beauty and Nadine Labaki's Where Do We Go Now? Not to mention, Chakra is always one of the few voices I turn to when I need to understand the problems and discover the gems. As usual, he shed light on the great steps forward, and some steps back, taken in Arab cinema today.

What has been the most successful Arab film you've distributed to date?

Gianluca Chakra: In reality the Arab films are mainly from Egypt as the rest of Arab countries have little or no production at all. The last successful Egyptian films we distributed were the latest Ahmad Hilmy films X-Large and Ala Gossety (Over My Dead Body). The last successful non-Egyptian film was Nadine Labaki's Where Do We Go Now? which truly broke records in Lebanon; it was third on the "All Time Top 20" only after Titanic and Avatar.

What are the numbers, for example box office of a major Hollywood film today, as opposed to a year ago, and two. And with Arab cinema?

Chakra: Every year we see an increment of around 10 percent, due to more and more multiplexes opening up. Regarding Arab cinema though, these have dropped... and drastically. Once again, 98 percent of Arab films released in the Gulf region are Egyptian. Due to the Egyptian turmoil, productions have slowed down. We usually have a big Arabic film to be launched during the Eid season. This past year, there were none. The whole Middle East depends on Egyptian films. The ones produced outside of Egypt do not travel outside of their country of origin and if they do, they either have a really small theatrical release or, in the case of the majority of Lebanese films, end up straight to VOD/DVD.

Your company is based in Dubai, so lets talk a bit about cinema in the Emirates. What are the main differences in how the UAE watches films, including Hollywood and Bollywood, from say, five years ago?

Chakra: Not much has changed in taste. Bollywood films as well as Egyptian film still bank on the few and usual stars. And when it comes to Hollywood, the films that usually work are the usual blockbusters and horrors as well as cast driven comedies. It is rare that we get surprise hits in this part of the world.

What would be your own dream projects for the Emirates?

Chakra: Maybe a big TV series talking about the family feuds before Dubai or the UAE was formed. That would be a truly eye opening event for everyone in the region. Or maybe movies that would portray a bit of the history of the UAE that rarely anyone knows. After all, 80 to 85 percent of the population in the UAE are expatriates.

What are some of the challenges for Arab cinema, and maybe in particular for Emirati cinema?

Chakra: Good writing has never been a "forte" in Arab cinema. A prime example is Egyptian Cinema. It is rare that we see an outstanding film out of Egypt. Youssef Chahine was probably one of the most sophisticated and brilliant writers and filmmakers who came out of Egypt. Now that he has passed, Egypt is left with their usual slapstick comedies that depend mainly on the usual 3 or 4 big names and no matter how bad the film is, people will still flock into theatres to watch these. Mind you that Youssef Chahine films performed poorly throughout the Middle East, including Egypt. The UAE has to battle with the lack of good writing and the lack of known talent both actors and filmmakers. But a main factor is the business model adapted which is, to say the least, demented. There's no TV Involvement, nor proper distribution set up. Everything is totally improvised depending solely on theatrical revenues when in fact, there are many more mediums where these few films can generate viewership, and therefore revenue.

How can that be overcome?

Chakra: I believe that the UAE should start looking into low budget filmmaking, based on good material and maybe find more unity within the Gulf and co-produce. Not just with neighboring countries but find strategic co-production set ups with Egypt (in order to create talent) as well as television which is a medium that is hungry for original content as well as creating new stars.

The film culture is created by education though, not only the filmmakers but also the audience. How is the audience educated? I believe the media should play a big factor. All the main TV stations are based in the UAE but unfortunately these never follow what local artists and filmmakers are up to and do nothing to encourage the Seventh Art. A clear indication is how the media would cover only blockbusters, mainly because stars would bring in audience and/or readers, and never cover smaller international gems, like for example Beasts of The Southern Wild, The Imposter and Searching For Sugarman just to name a few. If these films aren't covered, how on earth would they even remotely be interested in covering a little local gem executed by unknown filmmakers and unknown stars?

I haven't seen one single TV station -- with the exception of DMTV -- that encourage and discuss films after airing these on TV. This is part of film appreciation which could lead to educating audiences of all ages. The bigger TV stations or publications never ever follow emerging talent or even care. Instead they will only talk about the glitz and glamour that surrounds the film industry rather than the films. Just look at the programs that air on TV that talk about films. These are miniature versions of "E!" and that's all.

The commissions that have been created in the UAE to attract cinema to the region, like the Dubai Film and TV Commission and the Abu Dhabi Film Commission, what are their strengths and weaknesses in your opinion?

Chakra: The commissions so far are slowly moving in the right direction by offering programs and incentives to aspiring filmmakers. Producing a film in the UAE though is not cost effective. Many filmmakers outsource their productions in Egypt and Lebanon as the cost is way cheaper. Just look at the TV stations where they produce most of their original programming or adapted formats. Why are most Ramadan series produced either in Egypt or Syria?

One of the great steps the Dubai Film Commission took was definitely working with Paramount on Mission Impossible 4 because eventually it resulted in being a better ad for Dubai and the UAE than any CNN advertisement. This was a great move. These same film commissions though don't necessarily attract film productions to be shot in the UAE. Not at all. It all depends on the material given. They are surely positive in creating a buzz aound the UAE and encourage even local filmmakers in presenting projects and therefore compete with other international aspiring filmmakers.

Competition is always a plus in wanting to learn more and eventually aspire to be the best. Big production houses and major studios are always looking for money and so far are focusing on emerging markets such as the Middle East, India and obviously China.