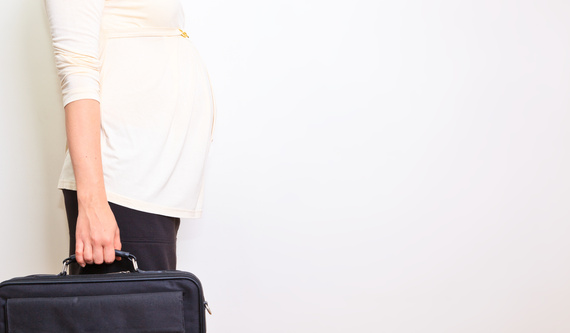 After training for 15 years to become a Maternal-Fetal Medicine Specialist, I found myself 34 with no prospects for a long-term relationship and one year away from being the dreaded "advanced maternal age" -- that age for a woman when her risk of having a baby with genetic abnormalities (i.e. Down syndrome) starts to increase. As a high-risk obstetrician, I should have realized the significance of that milestone in my life, but I didn't. Like many career women, I put my career plans first and had convinced myself that NOT having children would be OK. I never anticipated how drastically my life would change when I finally started trying to conceive at age 40.

"Delayed child-bearing" is a term used to refer to women who wait until much later in life to have their first child. Unfortunately, for many career women who delay child-bearing, it is a hard slap in the face when receiving a diagnosis of infertility after they cannot conceive naturally later in life; I was one of those women. For someone who had spent her whole life achieving and succeeding, not being able to become pregnant was life-changing and ego-shattering. As a result, the business of assisted reproductive technology (ART), namely in vitro fertilization (IVF), is thriving and being utilized by women in their late 30's and 40's who have delayed child-bearing and are unable to conceive naturally.

Advancing maternal age plays a role in the success of IVF with success rates as low as 5 percent for women aged 42 and older. The fact remains that although pregnancies through ART and IVF are increasing, a successful pregnancy through these methods is not guaranteed. Women over age 35 are not only faced with sub-optimal egg quantity (the number of eggs available for fertilization), they are faced with sub-optimal egg quality (the number of eggs that are genetically normal). As a result, successful pregnancies in women over age 35, and especially in women over age 40, represent a smaller percentage of successful IVF pregnancies.

The good news is that despite the potential difficulties that arise with age, numerous options for having a child through ART exist. These include IVF with a woman's own eggs, IVF with donor egg or embryo, and pregnancy through surrogacy. The bad news is that it may be a long, expensive road in getting there. The American Society of Reproductive Medicine (ASRM) reports the average cost of an IVF cycle is $12,400. It is not qualified whether this cost includes medications, which currently averages between $4000-$8000 per IVF cycle. For women of advanced age, higher doses of medications, and thus added cost, are more likely to be needed.

When taking into account the possibility of multiple IVF cycles (which is common for women over age 35), the cost of donor eggs if needed (additional cost of $20,000 to $35,000, based on varying services, fees and medical expenses), or the cost of a surrogate (cost is highly variable depending on state of residence, but can be as high as $140,000), the amount spent can easily reach six figures. ART and IVF is a big business and women and couples who have delayed child-bearing are ready patrons.

For many women who anticipate delaying child-bearing due to their career plans, "egg freezing" is a way to preserve their fertility; a practice commonly referred to as "fertility preservation". This is essentially an IVF cycle where a woman freezes her own eggs, rather than fertilizing them with a known or unknown sperm donor, for future use. Without a doubt, egg freezing has crossed the mind of many career-focused, single women and even the minds of many career-focused women in committed long-term relationships.

Egg freezing is viewed as an "insurance policy" of sorts. There are egg freezing parties, campaigns, social media sites and legitimate egg freezing advocates, like myself. After having gone through 5 unsuccessful cycles of IVF and an egg donor IVF cycle by age 42, I unapologetically encourage any woman heading down the path I blazed to freeze her eggs. Egg freezing is a valid option for any woman who anticipates delaying child-bearing and should ideally be done in her late 20's or early 30's in order to decrease the chance of having genetically abnormal eggs or embryos.

Drastic improvements in egg freezing technology have occurred in the past 3-5 years. A woman 10 years ago would have been encouraged to freeze embryos by choosing a known or unknown sperm donor. This was due to the fact that embryos were better able to survive the "thaw" than individual eggs. Today, she can freeze her eggs alone and wait for the "Mr. Right" sperm donor. Egg freezing is a growing and thriving business. It is even an option that many big businesses are now offering to their female employees as a perk of employment.

The average cost of an egg freezing cycle is $10,000-$12,000, not including yearly storage fees, thawing fees for an embryo transfer or medication costs. Oftentimes, if a woman does not get an ideal number of eggs to freeze in one cycle (at least 15 eggs is recommended), two or more cycles may be recommended. Yes, this is a pricey option for a woman who desires fertility preservation and an option that may never even be utilized. However, it is an option that many career women are readily choosing.

Women no longer have to be in a rush to meet some antiquated societal norm of children over career. There are options. However, waiting may not get the career woman EVERYTHING she wants the WAY she wants it. It may not be easy or "cheap" to naturally conceive when she is finally ready later in life, and additional efforts may be required that were not anticipated. But most importantly, I encourage every career woman to never assume at 20-something that she already knows what she will want when she are 30- or 40-something.