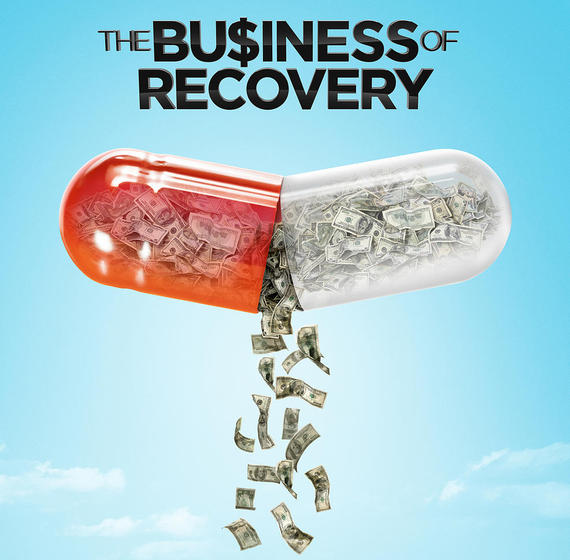 A promotion for snake oil? For a destination resort? Not exactly. That's what families often read when they go online, frightened and desperate that a loved one with an addiction may die unless they are treated and get better. That's what those in the throes of an addiction read as well, and the seduction can be alluring.

The addiction treatment "industry" (not including public, state, city and county treatment programs) is principally for-profit, and it is big business. The private, not-for-profits are in the business as well, with their CEOs and medical directors making high six-figure incomes. Annually, industry revenues are $34 billion (2013), as we see in a screen shot and voice over in the riveting documentary, The Business of Recovery. Addiction is ubiquitous in our society, and its toll is grave (to read more, including about Robin Williams and Phillip Seymour Hoffman, please go here).

We know the mental health care system is flawed, and there is a great deal of press that reveals the consequences. The substance use treatment system is even more troubled, but it has largely escaped notice. That leaves patients and their families all the more subject to its false claims, inadequate treatments, and financial exploitation.

Perhaps the greatest fiction the addiction treatment industry propagates is that of the effectiveness of the 12-step (AA) method of recovery. "Ninety percent of recovery centers are based on AA..." the documentary tells us and we go visiting some of the best known and most (financially) successful programs in this country. AA is synonymous with the 12 steps, a spiritual approach to recovery, developed by "Dr. Bob" (Smith) and Bill Wilson, who founded AA in the U.S. in 1935. Yet studies of AA, discussed in the film by Dr. Lance Dodes, estimate that AA works for 5-10 percent of those who use it. That means that one in 20, maybe one in 10, respond to AA -- yet 90 percent of the treatment programs, including the most pre-eminent, not to mention the most expensive, are fundamentally based on a method with a very low response rate.

People with addiction and their families are not told about how small their chances of response are before they enter treatment or begin to pay tens of thousands of dollars every month for treatment. In the documentary, so ably done by director Adam Finberg and producer Greg Horvath, we meet patients and families who have spent vast sums of money for treatment, who have mortgaged their homes or spent their savings or money meant for the education of all their children. We see interviews with addiction program directors who, apparently in earnest, swear by AA as if it really worked a lot better than it does.

You want to see this documentary if you have an addiction, as nearly one in 10 American workers do, or if a loved one is abusing or becoming dependent on alcohol, narcotic pain pills (or heroin), amphetamines, marijuana and its even more toxic synthetic varieties (like K2 and Spice), tranquilizers, and other drugs of abuse. In fact, you probably want to see this documentary to be an informed consumer -- to judge if you are being sold snake oil or a program that might do better than helping one in 20 treated.

The April 2015 issue of The Atlantic Magazine had a feature story by Gabrielle Glaser called The Irrationality of Alcoholics Anonymous. We read there, as well, about the limits of AA but also learn that over the past two decades other treatments have been developed that can significantly increase the likelihood of abstinence and recovery. "The Business of Recovery" does mention these treatments but its accent is on exposing an industry that has yet to enter modern times. The business of recovery doesn't need to abandon AA; it can include it as part of a comprehensive approach to managing addiction.

New and noteworthy treatments for addiction include motivational techniques (pioneered by Bill Miller, Ph.D.) and cognitive-behavioral therapies. There is also SMART RECOVERY, an alternative to AA that seeks to address problems, not accept being powerless as AA prescribes. Today we also have Medication Assisted Treatment (MAT), the use of medications that can reduce cravings and help prevent relapse, like naltrexone, acamprosate, buprenorphine, Antabuse, buprenorphine (to learn more about this office based treatment for addiction to narcotics, including the epidemic of pain pill abuse, please go here), and methadone -- each prescribed on an individual basis according to the drug(s) involved and the particulars of each patient.

Furthermore, and this is critical, what few addiction programs actually do (though many claim they do) is to assess the patient for the presence of a co-existing psychiatric condition, like depression, bipolar disorder, PTSD, and anxiety disorders. Unless a co-existing mental disorder is properly diagnosed and effectively treated the likelihood of achieving sobriety is markedly diminished since a person's neurochemistry, emotional state, and motivation are not sufficiently stable to engage in the hard work, to meet the demands, of recovery.

The National Institute of Drug Abuse (NIDA) offers a helpful guide of questions by which patients and their families can assess an addiction program. These include is the treatment individualized to the patient; comprehensive (that is, not just AA); truly delivers evidence-based (scientifically proven) treatments; attends to co-existing mental disorders; and is of sufficient duration to work.

Toward the end of this film we hear that what is being sold by recovery programs is hope. Indeed, hope is at the heart of an effective path to recovery; it is the fuel that patients and families need when they enter and try to sustain treatment and rebuild a life. What is due them, and what they too often are not getting, is joining that hope with the most effective, comprehensive treatments we have to date. Extolling AA and blaming the patient when it does not work is not science, it is ideology -- at best. The message of this documentary is clear: It's time that the addiction/substance use disorder treatment system enter the 21st century and put patients, not profit, first.

To find out if there is a screening of this film in your city, go to: http://thebusinessofrecovery.com/.

The views expressed here are entirely my own. I take no support from any pharmaceutical, device or treatment industry company.