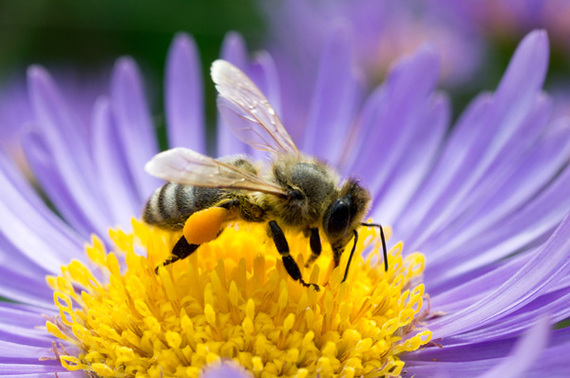 From the fuzzy bumblebees that our children chase in the garden to the industrious honeybees that sweeten our herbal tea, bees have woven an essential place in nature's mosaic. But bees are now caught in the toxic web of our climate crisis.

You may have heard that the decline of these buzzy pollinators could have severe impacts on food production. As global warming impacts our climate, changes in plant-flowering times have led to a massive decline in bee colonies. This trouncing is called "colony collapse disorder" (CCD). CCD threatens the health of an important species of bees: honeybees. And according to the U.S. Department of Agriculture, CCD also sounds a warning alarm on "the economic stability of commercial beekeeping and pollination operations in the United States."

At least four species of formerly common North American bumble bees have experienced catastrophic declines over the past decade -- two of them may be on the brink of extinction. Preliminary investigations by many scientists indicate that a number of other formerly common species are also less abundant than they were in the past.

Why Do Bees Matter?

You may be thinking, "Bees sting. Why would I want them in my garden buzzing around my kids?"

Actually, most bees don't sting, although a few species defend their nest. (Bumblebees are an exception.) Bees generally only use their stingers in defense. And get this: Only females are capable of stinging.

According to Marla Spivak, a distinguished McKnight professor in entomology at the University of Minnesota:

Honeybees and wild bees are the most important pollinators of many of the fruits and vegetables we eat. Of 100 crop species that provide 90% of our global food supply, 71 are bee-pollinated.

Why Do Bees Need Us?

Along with neonicotinoids -- a class of pesticides known to be toxic to bees; sprayed widely by agriculture companies such as Bayer, Monsanto and Dow; and found in plant pollen and nectar (bee food) -- climate change may be causing flowers to open before bees emerge from hibernation. As flower opening is synchronized with seasonal changes, this disruption leads to pollination declines.

Why Is It So Important to Protect Bees?

We need bees to pollinate our fruit, vegetable plants and wildflowers. According to The Guardian:

Declining numbers of bees and other pollinators have been causing growing concern in recent years, as scientists fear that decreased pollination could have major impacts on world food supplies.

Just recently the U.S. government released an alarming report stating that the honeybee-death rate is currently too high for the species to even survive.

So What Can We Do to Help Bees Survive?

Whether you see or hear bees where you live, they inhabit every urban yard and garden.

Become a citizen scientist with Bumble Bee Watch to assist with pollinator conservation. Here's how:

"Bee" informed. Check out these resources:

Books on beekeeping and bee gardens:

More learning and teaching about bees can be found here.

Let's not get stung. Protect the bees now and protect our children's future.