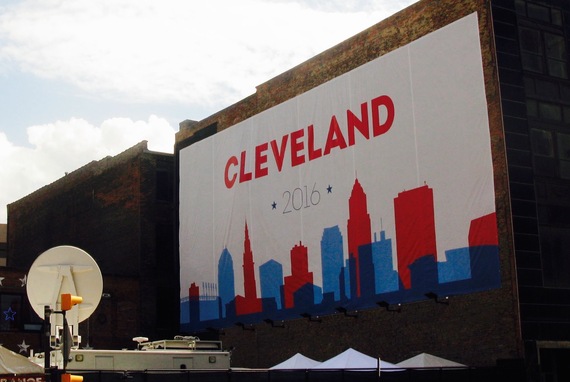 Enter Ted Cruz to the stage. He delivers a speech -- one of the most substantive the RNC has seen thus far. The moment to endorse Trump comes. The standing ovation is all but there... Until it isn't.

"Vote your conscience," he says.

A pregnant moment of silence -- of confusion. The New York Delegation begins to chant; the delegates are struck with realization. Here emerges Donald Trump from the corner -- a swift improvisation on his part. Smiling and waving -- he steals the moment that Cruz had all but seized. Cruz is booed off the stage. On-screen, his wife is taken away for her own protection. Off-screen, some of the audience gains a strange sense of respect for the former villain of this story.

Now the question. Was it worth it?

He certainly hopes so.

The media is right: the speech Cruz gave was a Day 4 speech, had he been the nominee. He gave it nonetheless. Many are saying it was Trump that was -- well, trumped. That Cruz got his revenge and a chance to stick up for honor of his family, and the honor the Republican party.

It was a backfire. It was a victory. Responses for the fate of Ted Cruz are varied. Call it what you want. In fact, you can call it something entirely different.

To the voter who had their mind made up against Trump before the convention, Cruz's speech was a shocking hope for the future of integrity in politics.

For those on the floor -- the people who helped Trump win 37 states, the ones who exploded when Eric came on stage -- Cruz's silence was a point for Trump. An assurance that they made the right decision not nominating a man who went back on his word. "Lying Ted," as they called him, lived up to his name.

Or, maybe it was something entirely different. Maybe it was an act of mutual manipulation on the part of both Trump and Cruz. The risk being whose side the favor will fall to.

He is not a man who has come this far from good politics. He has won the heart of his people through entertainment and a rehearsed act. And entertain he did.

He read Ted's speech ahead of time -- and he let him give it. Overtime. He stayed out of the picture -- until he didn't. The pivotal moment: Cruz asks the crowd to vote their conscience. The sea of boos erupts. From the corner, Trump emerges; perfect timing. Deliberate timing. It almost looked like Ted was going to get the last word.

Point for Trump. Or was it?

Cruz is a lawyer and a politician -- a man who embodies calculation. Granted -- his equation did not add up this election cycle -- but frankly, it isn't hard to see why. It hasn't exactly been a predictable 2016. Yet considering his bold move, he is relying on 2020 to be a year with fewer surprises. A year when he will be able to remind the people of the noble choice he made to stand up to evil and defend the honor of his family. It may be satisfying to see somebody stand up to Trump at his own party, but the implications of the gesture are harder to swallow.

Today, he is an enemy of the establishment and a man who went against his word to back the nominee. But tomorrow -- if tomorrow is a world where Hillary Clinton is president -- he will be the man who saw it coming. A man who was always there to offer an alternative.

Maybe Ted Cruz did this to stand on the right side of history.

Maybe he did this in anticipation of seizing history.

Picture it: Cruz 2020. An America led by the one of the most conservative men on the Hill, and certainly one of the least-liked. But hey -- not Trump.

Lest we forget that politics is a game. That we the people -- should we let our guard down -- are bound to be manipulated. You may have felt happy to see Cruz stand up to Trump. Good for you. Point for Cruz. Calculated.

If there is one lesson to be taken from this election cycle, it is that not everything is as it seems. That predictions can be wrong. Logic can fail.

This election cycle has been about exploiting emotions. This is no exception -- and Trump has proven himself a master of it in his own right. He is putting on a show for his people, and there is nobody who understands his people quite like Donald Trump.

Remember that when you are watching the television, you're watching an act. A play -- one where the Donald hides behind a screen of fog like the Wizard of Oz he is. One where he clears his enemy to stand on the stage only to be booed off of it. One where you might have found yourself suddenly cheering for a man who stands against everything you believe in.

At 11:35 p.m. on Thursday evening, the scene came to a close. In an hour and fifteen minutes, Trump made as many promises as there were balloons spilling from the ceiling -- regardless of whether they were consistent with the GOP platform. The conclusion of his speech? America is in trouble, and Donald J. Trump is a wish-granting factory.

Don't fall for it.