"911. What's your emergency?" Call center operators, they're the unsung heroes. Everyday they answer the pleas of frantic people in distress. But even they weren't prepared for this call.

We don't call 911 often, but when we do, we expect the person at the other end of the line to be calm, collected, probing and knowledgeable. They're no more than voices. Even if they gave us their names, who would remember them? After all, it's all about us, not them. 'Till now. This tension-filled thriller focuses on the strained, frayed but oh so mutually dependent relationship between victims and their helpers. And for the most part it does so admirably, giving Halle Berry her juiciest role in eons.

Jordan (Berry) works in the L.A. 911 call center. They call it the hive, because with the constant din of conversations it sounds like bees at work. On her shift, she gets calls for help, nuisance calls, calls from admirers. As she will someday teach future operators, there are two basic survival rules: 1. Stay emotionally detached. 2. Never make a promise, because operators rarely see the end results of their work -- that's a cop's job.

Screenwriter Richard D'Ovidio hadn't thought much about 911 call center operators until his wife listened to an NPR show about the subject. Good writers don't just sniff out intriguing subject matter; they base further exploration and development on whether they are gong down a path that is unique or too well worn. 911 folks have never had their story told, so D'Ovidio did some investigating and witnessed their coolness under fire: ""Every time a call came in, my stomach would drop, but they were so calm!" "...they were the glue of the city. They held the police, the fire, the ambulances -- nobody moved in the city without them."

"A man is trying to break into my house!" The young girl on the phone is terrified, but Jordan tries to talk her through an escape plan. "Open a window." "Hide." "Don't talk." The teen follows her commands, but they don't work. She's kidnapped, murdered and her body is found in a field. Jordan is devastated. Six months later a rookie operator answers a similar call from a teen named Casey (Abigail Breslin), who has been abducted in a mall and thrown into the trunk of a sedan. The rookie panics and Jordan takes over, calming the screaming victim. The police are alerted, and their efforts are spearheaded by Jordan's boyfriend Officer Paul Phillips (Morris Chestnut) and his partner Jake Devans (David Otunga). Jordan is determined not to let this caller down, but sometimes determination is not enough.

Halley Berry is a movie star, but it's hard to remember why these days. She's been in so many big-budget soulless films and her persona has been chipped away by tabloid headlines that reduce her to failed relationships, contentious custody battles and the men who literally fight for her attention. There couldn't be a better time to for her to get the press to refocus on her acting, and she makes the most of this opportunity. The script gives Berry a blue-collar character she can make accessible, vulnerable and gutsy. She works the screen like Meryl Streep, giving her best performance since Monster's Ball.

Chestnut is suitably gallant and stalwart as her caring lover and a cop on a mission. WWE wrestling champion David Otunga (Jennifer Hudson's main man) is a cool sidekick. Breslin, in her most adult role yet, shrieks and cries for help on cue as her character struggles to find her bearing and gumption. Michael Eklund (TV's Shattered and True Justice) plays the psychopathic kidnapper with surprising depth. It's helpful that he doesn't have a familiar face, and hasn't played a string of cliché bad guys. His wiry, jittery sleazy demeanor leaves a lasting impression; like John Hawkes from the film Winter's Bone.

Back in 1996, director Brad Anderson cut his teeth on a $40,000 film called The Darien Gap, which premiered at the Sundance film festival. His thin filmography includes the indie classic The Machinist, starring a very emaciated Christian Bale. He didn't need movie credits to prepare him for this tight-has-a-drum, riveting thriller. Directing episodes of The Wire and The Shield gave him the perfect sensibility for guiding this grizzly crime story, which will play even better someday on Saturday night cable TV. He gets great performances out of Berry, Eklund, Breslin and Morris. Gruesome scenes are well staged and choreographed. Anderson's only serious error is a postscript ending that takes you from reality to cheap horror effects. Even with this misplaced coda, his direction is solid.

The lag time in between call center work life and horrific events is negligible thanks to the pacing of editor Avi Youabian. Cinematographer Tom Yatsko gets all the lighting right -- love the bright Southern California skies juxtaposed with the inside of a pitch dark car trunk. Berry's Jeri Curl Afro wig is a bit distracting. The kidnapper blares his car radio with deafening music, but the musical score is innocuous. Costumes, set design and art direction are on point.

Don't be fooled. This film is a whole lot scarier than you think it's going to be. When Casey screams to her tormentor, "Please just kill me," you get it. At that point, she is so terrified, exhausted and beaten down, she just wants the seemingly inevitable to be over. But it isn't.

PHOTO GALLERY
The Call
Download
Calling all HuffPost superfans!
Sign up for membership to become a founding member and help shape HuffPost's next chapter
Join HuffPost

The Call
The Call 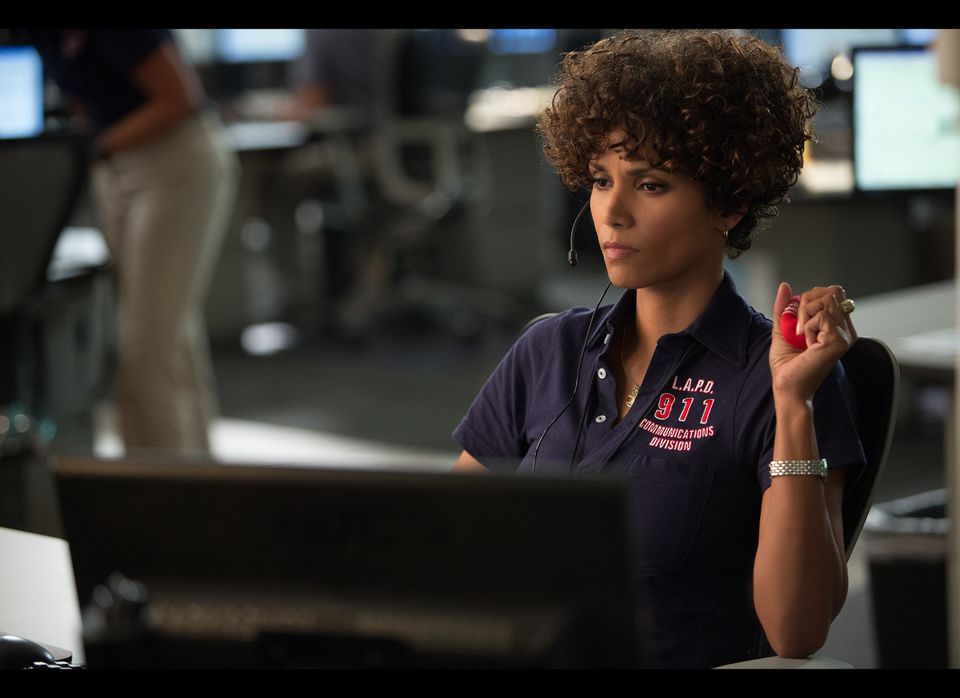 1 / 6
Halle Berry as Jordan, a 911 operator
“911. What’s your emergency?” Call center operators, they’re the unsung heroes. Everyday they answer the pleas of frantic people in distress.