If you tune into a Detroit Lions game (and yes, I know for most people that is something that probably hasn't happened for quite a while), you will hear someone eventually say something like, "The Lions have to get the ball to Calvin Johnson. He is their best player and they have to find a way to get him the ball."

This sentiment rests on two beliefs. First, Calvin Johnson is clearly the best player on the Lions. And secondly, the Lions are not targeting Johnson enough on offense.

The first belief can be linked to the following numbers:

The size and speed numbers of Johnson have led to the nickname of "Megatron." And when we look at Megatron's receptions, it does appear that Johnson is under-utilized.

Here are the number of receptions Johnson has accumlated since 2008:

Once again, this is Megatron. Despite overwhelming physical gifts, though, Johnson has never ranked higher than 20th in receptions.

So why can't the Lions "get Johnson the damn ball"?

The answer to this question might be surprising. A few years ago the NFL expanded the statistics tracked for wide receivers and now we can see how often teams "target" a specific receiver (one can find this data at ESPN.com). And when we look at how often Johnson has been targeted we see the following numbers:

These numbers tell us why Megatron doesn't say "Just Give Me the Damn Ball!" (other than the fact he appears to be a nice guy). The Lions are indeed throwing Johnson the "Damn Ball."

And what are the Lions getting when they throw to Megatron? Relative to other leading receivers, the Lions aren't getting much. In 2008 there were 16 elite wide receivers who were targeted at least 128 times (or 8 times per game across a 16 game season). Across this sample -- listed in the following table -- the average elite wide receiver posted a Catch Rate (receptions divided targets) of 59.5% and a Yard per Target mark of 8.23. Although Johnson was above average with respect to the latter, Megatron was below average with respect to Catch Rate. 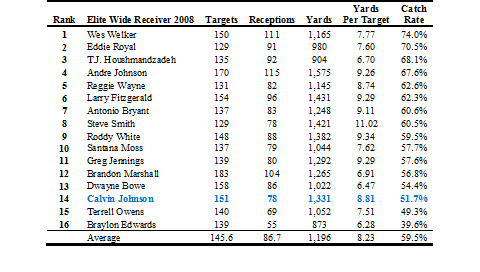 The next table reports the performance of elite wide receivers in 2009. As one can see, last season Megatron -- with respect to Catch Rate -- was the lowest ranked elite receiver. And with respect to Yards per Target, only Larry Fitzgerald offered fewer yards per time he was targeted. 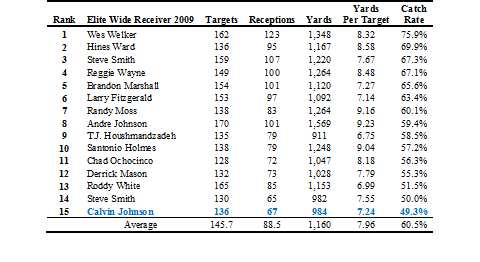 Unfortunately for the Lions, the same pattern continues this year. Megatron is still being targeted. But after five games in 2010 -- as the following table notes -- Johnson is still posting a Catch Rate and a Yards per Target mark that is well below average.

So is Megatron the Lions best player? Well, he certainly looks the part. And on a team that has only won four times in their last 45 contests, perhaps looking the part is all a player needs to be considered "best."

But relative to other receivers who are the "best" on their respective team, Johnson -- despite an immense advantage in measurables -- doesn't measure up. And this isn't because his team isn't trying to give him the ball. The problem is that the Lions efforts to give Johnson the ball haven't resulted in much production.

Now there are a few reasons why this could be happening.

1. Maybe Calvin Johnson -- once again, despite the measurables -- isn't really that good (again, relative to other elite receivers). Certainly this is the most obvious explanation.

2. Perhaps the problem lies with the quarterback trying to deliver the ball. Here are the starting quarterbacks who Johnson has played with in his career: Jon Kitna, Dan Orlovsky, Matthew Stafford, Drew Stanton, Daunte Culpepper, and Shaun Hill. The "target" statistic doesn't tell us if the quarterback is actually coming that close to the receiver. Maybe all the misfired passes in Johnson's direction should really be blamed on the poor collection of quarterbacks the Lions have employed recently.

3. Or maybe the problem is that the Lions don't have any other offensive weapons. Perhaps the consistent double-teams -- and even triple-teams -- make connecting with Johnson too difficult.

Although #2 and #3 are compelling reasons, one must remember that the talent level on the Lions this year has improved. After five games the Lions are currently 6th in the NFL in passing yards per game and actually first in the NFC in points scored. The additions of Jahvid Best, Tony Sheffler (and even Shaun Hill), and the development of Brandon Pettigrew has given the Lions many more options on offense. With such options available one might expect defenses to focus less on Johnson, and therefore Johnson's performance should improve.

After five games this year, though, Megatron is still posting the same relatively poor numbers we have seen in the past. Contrary to what we hear, though, we can expect the Lions to keep trying to "give the damn ball" to Johnson. And Lions fans (and I am obviously in this group) can only hope the Megatron myth (i.e. Calvin Johnson is an elite wide receiver) becomes reality.