I am terrible at writing headlines, but in these times of Google searches and social networking, article tags and Twitter hashtags, headlines are important. "Hope springs eternal" won't cut it when referring to what happened in Maine last week regarding gay rights. The linkage of "audacity" and "hope" is a winner, especially since I was clever enough to work "campaign" into the tease. But The Campaign is not about Obama and not about Maine, either. It is about the dedication, hard work, patience, and tenacity of a young filmmaker, born and bred in Mississippi, who is fighting with every ounce of her heart and soul to complete a documentary about the heart-breaking battle against California's Proposition 8, which banned gay marriage in California. What happened in California was a clear harbinger of last week's repeal of Maine's law legalizing gay marriages by 53 percent to 47 percent.

One might argue that the defeat in Maine provided a psychological boost to activists in California who will most certainly put the issue squarely on the ballot in 2012. Read any analysis and the pollsters will say that it is the young who will support the issue of gay rights. The young voters did not turn out in an off-election year.

The Campaign tells the story of a lost battle, inspiring hope through the passionate work of those committed to re-energizing the fight for gay rights. Christie Herring captures the essence of this emotional journey, blending in-depth observational footage with interviews of stakeholders -- from Executive Committee Members to first-time volunteers. So far there is only the trailer, but the footage is all there, ready to be assembled. There is also the priceless talent of the filmmaker. 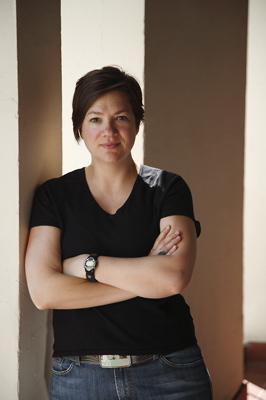 Christie Herring is no stranger to the political process or social justice issues. Herring's first film, Waking in Mississippi, focuses on a controversial political race in her Mississippi hometown -- the 1994 election of the town's first black mayor which ended in the threat of a race riot. Today she is an award-winning independent documentary director. Her resume is impressive and includes PBS, National Geographic, MTV/LOGO, A&E, and the History Channel. Trying to get a documentary completed on the critical issues facing the Lesbian, Gay, Bisexual and Transgender communities isn't easy. But it is the unheralded individual, working from a sense of commitment to what is right, who can create a sea change.

It so often falls to the young to wage this fight.

Was it bigotry that defeated gay marriage in Maine and California, or was it ignorance? I can't judge, and the pundits from either side have no right to judge what was in the hearts of voters either. In the late seventies, when I was young and still hopeful, I was privileged to march with my gay brothers and sisters when the bigotry of Anita Bryant began to poison the political landscape of the country.

We had rocks thrown at us, and we were spit upon, but what hurt more was the absolute hatred in the eyes of Bryant's followers. Gays and their supporters were "evil," plain and simple. Gay marriage was not even in the lexicon in those days. Beauty queen Bryant preached an Old Testament activism and what stuck in her craw was a 1977 Miami-Dade County amendment to the local human rights ordinance making it illegal to discriminate in housing, loans, and employment based upon sexual preference. Her brand of hatred won, and the law was repealed. The following year, she supported the failed Briggs Initiative in California, which would have produced a witch-hunt against gay teachers or anyone who advocated a gay lifestyle.

So in some ways, one could argue that things are "better" now for the LGBT community, but Herring casts an unjaundiced eye upon what she terms the "the fault lines of religion, race, and sexual identity." She makes a good point. Have things really changed for the LGBT community except in the most superficial ways since 1977? I wonder. I study the trailer and am reminded of the pain we witnessed back in the days when the movement for true gay equality was in its infancy. One of the individuals featured in THE CAMPAIGN trailer speaks about how "personal" it is to hear people "yelling and screaming" about taking away the right to love--the most basic of human rights.

All Herring has is a trailer now, but it is an excellent, quality beginning, and given Herring's track record, there is a better than even chance the film will be made. Herring possesses her own brand of audacity, hope and generosity.

Over the last week, I have been full of emotion, thinking about what I was doing this time last year. On November 4, 2008, I was up at 3AM, after 90 minutes of glorious sleep, and I arrived at campaign headquarters at 4:15AM. I planned to film the headquarters before the lights came on at 5AM. To my surprise, the staff had arrived even earlier, unable to sleep in anticipation of Election Day. Twenty-three hours later, we were all still awake, holding onto hope that Prop 8 would not pass. I'm sharing THE CAMPAIGN trailer now as a reminder of that day and as a thank you to the campaign staffers, activists, and community members who put their hearts into this crucial work. 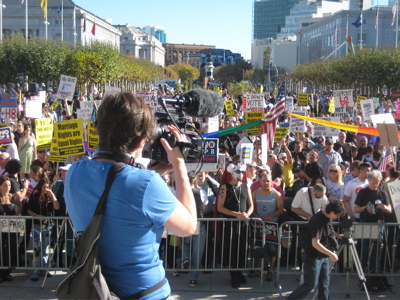 Image: San Francisco Impact Rally (2008) © Barry Perlman The Campaign require our attention and our support. Because young people dared to face the hatred of Anita Bryant and her supporters, progress was made. My daughter's generation considers gay rights to be a non-issue. If I have grandchildren, I have some hope that the world they enter will allow them to make the simple and profound choice to love whom they wish. Films like The Campaign will provide the historical blueprint and record of how the fight was waged, how battles were won--and lost.

Hope does spring eternal, but its future rests with the young, the dedicated and the openhearted. Hope also requires belief.