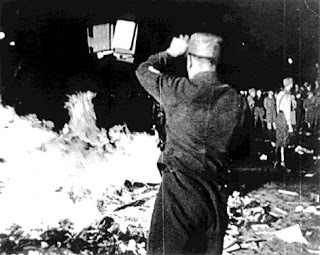 Considerable controversy was generated by President Obama's recent deployment of the N word in a radio interview. It's lucky that he's the president and also happens to be black. "It's good to be the king," Mel Brooks famously intoned in The History of the World Part 1. But the language police are everywhere. Even though it's already 2015; it's clearly a form of the Newspeak which George Orwell envisioned when he wrote l984 back in l948. Curiously much of this policing emanates on campuses which had previously been considered to be bastions of humanism. Remember Mario Savio and the Berkeley Free Speech movement? As David Brooks comments in a recent Times Op- Ed piece, "The Campus Crusaders," (NYT, 6/2/15),

"Today's campus activists are not only going after actual acts of discrimination--which is admirable. They are also going after incorrect thought--impiety and blasphemy. They are going after people for simply failing to show sufficient deference to and respect for the etiquette they hold dear. They sometimes conflate ideas with actions and regard controversial ideas as forms of violence."

Triggering is the word that's used by today's thought police who are intent on protecting a series of rather fragile sensibilities, at the expense of free expression. What is fueling all this sensitivity? Why have words taken on a such a power that that certain epithets and expletives cannot even be used contextually, say in a work of fiction like Joseph Conrad's The Nigger of the Narcissus without causing the situation that Ray Bradbury envisioned in Fahrenheit 451. Huckleberry Finn has also run into problems (""Huckleberry Finn" and the N-Word Debate," CBS, 6/12/11) with one publisher offering a sanitized edition for use in schools. Campus activists should remember that it was the German Student Union that advocated the burning of the books back in l933.