Ever since I kicked that bitch cancer's bony ass, I've been pretty fearless. And feistier than ever.

So when The United States Preventive Services Task Force said Monday that women should start regular breast cancer screening at age 50, not 40, and that doctors should stop teaching women to examine their breasts on a regular basis, you can imagine that it raised my ire. I got more than a little irked.

Why? For starters, I was 43 when I was diagnosed with breast cancer, and I fall in that weird age-range. Luckily I caught it in its early stage. But what if I was discouraged to get tested if the new guidelines were actually implemented? And will others my age (my friends!) be as lucky as I was if they're not getting screened? The later breast cancer is caught, the less chance there is for survival.

I know about all this because for the last six years I've had breasts on the brain. 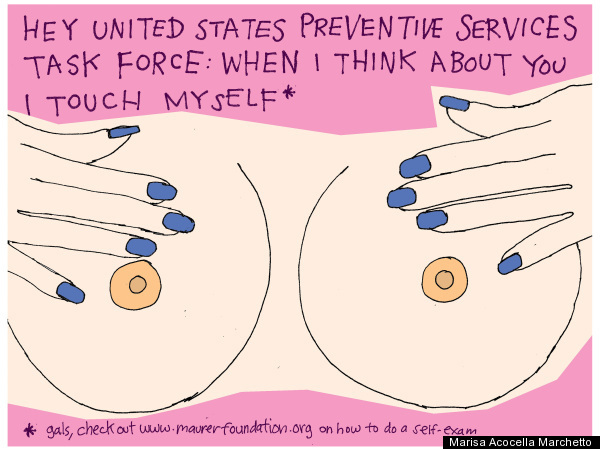 I'm a cartoonist/activist (yes I am) who wrote Cancer Vixen (Pantheon), a graphic memoir, and I've traveled all over the world talking to women who've had breast cancer and survived it because they caught it earlier before it was too late. And I couldn't disagree more with the USPSTF. There has been a consistent reduction in the rates of death from breast cancer in every country--including the United States--that has instituted a regular screening program.

Mammograms, while not perfect, do detect breast cancer. If you catch breast cancer early, you have a 98 percent survival rate. If you don't test yourself until you're 50 - then you risk receiving a later diagnosis, which could lead to death. To be blunt: it could kill you. A higher death rate from breast cancer is unacceptable in the United States of America.

More alarming, 80% of women find breast cancer themselves, yet the USPSTF urges doctors to stop teaching women how to give themselves a self-exam. This is another stark example of how incredibly irresponsible the USPSTF is, and how they are endangering the lives of every woman in America.

Thank you USPSTF, thank you so much.

Dr. Larry Norton, Breast Cancer Research Foundation Scientific Director; Chairman, BCRF Executive Board of Scientific Advisors, had an 11 year-old patient with breast cancer. We're hearing about women and unfortunately, even girls diagnosed at younger ages, and yet now they're raising the age for women to get screened. How could this possibly make sense?

I feel cautious about what the next step is: the government will not pay for your mammogram unless you're 50 and over. This is common in Europe, where medicine is socialized so the government doesn't have to pay for it. If this is the case, it's only a matter of time before each and every woman in this country is under 50 and has insurance will have to pay for a mammogram. We're in a recession. Paying for a mammogram is an additional obstacle for something that no one wants to do in the first place. It's just one more reason not to do the very thing that can save your life.

I started the CANCER VIXEN FUND here in New York City for women who are uninsured so they can get free mammograms. (When I was diagnosed, I was uninsured.) I believe that each and every woman has the right to live. The Cancer Vixen Mission: No Breast Left Behind. We've done over 600 mammograms and have saved at least two lives. I can say with absolute certainty that mammograms do work.

Women of America, we cannot let the USPSTF change the guidelines for mammograms. We must fight for ourselves, our mothers, our sisters, our cousins, our aunts, our friends and even our frenemies. (Yes, even frenemies. You'll get good karma points.)

Each and every woman in this country should have an equal opportunity to kick cancer's bony ass, and the best way for that to happen is when you catch it early.

USPSTF, get out of our way because if you insist on implementing these guidelines, you're next.