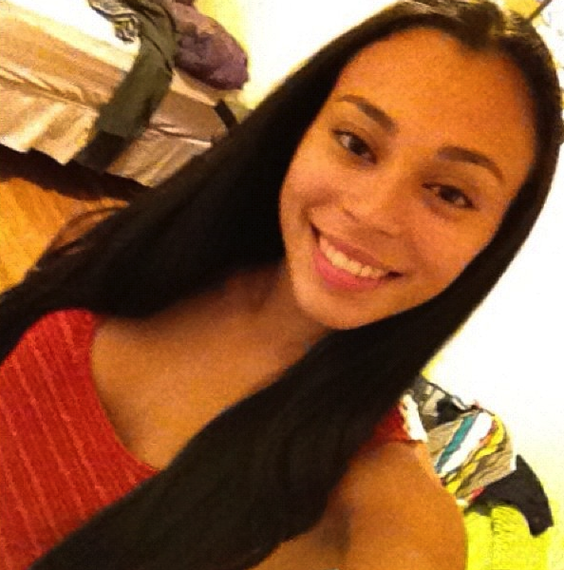 Thanks to me, we begin the same step over again. This is my fifth screw up. I reach my tipping point when the captain mocks me in front of everyone:

"Because of Ashlynn, we have to start all over."

I can take no more. I grab my bag.

I'm quitting, I tell myself. But I do not make it out of the building without reconsidering my decision. I am not a quitter. In fact, two years later, the girl that messed up the steps that day--- me ---becomes captain of the Academy of Mount Saint Ursula Step Team. I trace my resilience to the eve of Valentine's Day, 2005.

I am nine years old sitting on my bed wrapping candy in colored paper when the phone rings. My mom answers and then begins to cry. She grabs her stuff and runs out of the house. It is 8:00 PM. She never leaves the house this late. She returns hours later with news: my father is dead, the victim of a fatal bullet. Instead of crying, I sit in silence in the dark. He has already missed so much. He promised me that he would make it up to me, but he would now miss the rest of my life.

My mother is a police officer. My father was an ex-convict. For as long as I can remember, Dad was always the absent parent. He was imprisoned shortly after my birth, leaving my 18-year-old mother to raise me on her own. He was not released until I was seven. I sometimes found it hard to let go of the resentment. I had grown up without a father for so long that it became normal. Months before his death, I began opening up to him, and our relationship became stronger. He stressed the importance of never giving up and not making the mistakes that he made in life. He told me he had been offered a basketball scholarship to the University of Michigan. He chose another life that landed him in jail. He convinced me to be different and to create a better path than his.

My dad's poor decisions eventually cost him his life. However, his faults helped me learn how to become the person he dreamed I could be. In reality, he had not let me down completely as he demonstrated what my life could become if I did not follow his advice.

My mother, on the other hand, has always been there for me. She grew up in poverty and was left to raise me alone. She eventually returned to college and became a police officer. My mother demonstrates the value in my father's theory of not giving up. He didn't live that life, but Mom displayed it brilliantly, and her model compelled me to stay on the step team that day. After all, my mother has faced many difficulties on her own. So I kept practicing those steps until I perfected them--even when it meant practicing longer and not going out with my friends. In doing so, I follow my mom who made choices that are the opposite of my dad's. She shows me that it is possible to be strong enough to withstand even the most challenging obstacles and to stay clear of those who may be a distraction to me.

Two years ago, I was en route to leaving the building and quitting the team. Instead, I turned back, knowing that I could not be a quitter. It was not part of who I was or who I wanted to become. With the forgiveness of my coach and the team, I vowed to my teammates that I would never let them down again.

My father once told me I was a "Sarubbi" and I could be whatever I wanted to be. My big moment of triumph came last spring. I sat in a circle talking and playing around with my teammates. My coach called me to the hallway. I became very nervous. When we got to the hallway, he began a speech about what was expected of the team members and the captains. I thought I was being removed from the team. Finally, my coach announced that I had been promoted to Captain of the team.

Ashlynn Sarubbi, a 2013 graduate of Academy of Mount Saint Ursula, is a freshman at Franklin and Marshall.