It's been a long, hot summer here in our new home. We have gone from North America to Middle East, freezing ocean to warm sea, English to Hebrew, urban to rural, family dog to no dog, burritos to falafel, no cousins to tons of cousins, driving lanes as guides, to driving lanes as mere suggestions for placement of your vehicle (which most choose to ignore), many friends to many future friends...

Oh, and there was the month of chicken pox, baseball dreams that didn't come true (more on that another time), broken down cars and a new dryer that didn't work (not that we need it in this heat)... I could go on.

The point is, though, that while I'm ready to scream at the top of my lungs, "Yahoo! School starts tomorrow! We made it!" The reality is that each of the five of us is a swell of emotions pounding the shore much more like the waves of the Pacific Ocean than the Mediterranean Sea. So, while yesterday's car ride home from the a very sweet chocolate factory, where the boys each created their own beautiful creations that I'm guessing they're devouring while I hide in a neighbor's room to write this, was very LOUD, it really needed to be LOUD.

I could write you all the details of the high-pitched screams, the hitting, pinching and the pushing (all in the back seat), but that would be way too overwhelming and annoying.

Instead, I'll share with you my recap, which is much more palatable, and much more likely to portray the "normalcy" of the situation, and to help you remain calm the next time something like this happens in your family.

We participated in a lovely chocolate-making workshop in an air-conditioned room with helpers who were happy to bring you more of whichever candy you "needed" more of to decorate your creation. 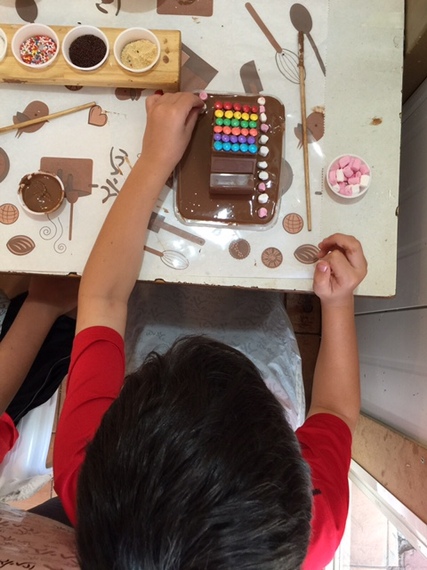 The boys walked out with smiles from ear to ear.

It was approximately one million degrees outside, but we were also approximately one minute from the Sea of Galilee, so we did what every million-degree Israeli would do in such a situation. We drove the one minute, parked the car, found a hole in a fence, and made our way down to a beach, where we swam, found crabs, and had a good ol' time.

By then, everyone was hungry, so we got back in the car and went out for lunch at some burger place that the kids were begging to go to. Turns out they had a really good veggie burger for me, so we were all happy.

Then we headed back to the chocolate factory to pick up our chocolate creations that had been setting in a fridge.

And here my story begins.

All because some "stupid" person at the chocolate factory who "doesn't know how to wrap things good" knocked one of the m-and-m-type candies off the top of my 8-year-old's chocolate car.

I really had to pee, and I was able to distract my son long enough to get him to go out to the car while I ran to the bathroom (not a strategy, by the way, that I teach, but one that I know we all find necessary from time to time), but by the time I got out, he was a full-blown erupting volcano. The lava was oozing out all over the back seat in the form of all sorts of choice words and ear-piercing sounds.

And then he got so mad at the "stupid" person who knocked off his blue m and m thing that he took off his hat and, with an accompanying scream reminiscent of the sound my mother must have heard when she insisted I pick an instrument other than violin, threw it at his creation and knocked off four other candies.

Then my son got really really upset and insisted that I had to fix his chocolate car "RIGHT NOW" because "it wasn't (his) fault!!!"

And then the limit: "No, Sweetie. We can fix it together when we get home."

You can imagine how that was received. No, not with a big hug and a thank you from the heart. Instead, he upped his decibels and continued to scream and cry.

I just repeated my sentence calmly and lovingly.

And then, after 10 minutes or so, his eyes brightened and he said, "Ima! (Hebrew for Mom) Look at those holes in the side of that mountain. They're caves! I want to go there sometime."

And so the storm calmed and the conversation shifted to the local geography and the names of the villages we passed.

When we got home, my son brought in his chocolate car, unwrapped it, and I helped him re-stick on the candies. Then he ran outside to play.

And that is the end of my story.

Now back to the business of parenting before he devours his entire concoction in one sitting and throws up. It's too hot today to deal with vomit.

Think this story would put a smile on someone's face? Someone who could really use a smile... Go ahead and share this adventure in parenting. We're all in this together!


Or on her Blog:
www.toshaschore.com/blog

More:
Raising BoysParenting Parentsconscious parentingtemper tantrums
Newsletter Sign Up
Raise the kind of person you'd like to know
Subscribe to our parenting newsletter.
Successfully Subscribed!
Realness delivered to your inbox