Not every child who enters this world is wanted. But for those who are, their futures are instantly called into question. Some parents are content simply knowing that their newborn is healthy. Others immediately start fantasizing about their offspring's college education and career goals.

While much has been written about the care and nurturing of a child's intellect (from listening to Mozart while in utero to being enrolled in ridiculously expensive and wildly exclusive preschool programs), it's hardly an American form of exceptionalism to assume that one's child is truly blessed and/or naturally gifted. Some children show surprising musical ability at an early age; others start drawing long before they can articulate any cogent thoughts about art history.

Instead of blaming the child for failing to meet an adult's expectations, sometimes it's necessary to take a close look at how a child's environment pushes him toward goals which may actually stifle creativity or set him up for failure. From "teaching to the test" to letting a child isolate himself in rehearsal rooms which offer little social interaction with his peers, the issue of "nature versus nurture" remains a baffling mystery.

The 2015 Berlin and Beyond Film Festival recently presented the American premiere of Erwin Wagenhofer's provocative documentary entitled Alphabet. Although beautifully filmed, viewers may become restless watching so many interviews filmed in trains and automobiles. The filmmaker's basic concept is that what adults want children to achieve and what interests children might pursue if left to their own devices are often quite different.

Wagenhofer's theory is simple: Too much of our educational system is based on an "alphabet" that steers young minds down a path designed to support capitalism rather than creativity. As their education progresses, children lose their natural gifts for spontaneity and self-expression, becoming dull automatons programmed to take tests and maximize profits with little thought to the consequences of their actions. In his director's statement, the filmmaker writes:

"After two films dealing with food and money (We Feed The World, Let's Make Money), I asked myself why it ever comes to such aberrations and distortions. Why do we prefer a system of closed society and fear an open, free society? Why do many of us exist in constant anxiety/fear of life although our economies have created incredible wealth? Why are we so unhappy (even though we seem to have everything)? Why is the distribution of our wealth working so badly?

History teaches us that the new is not the continuation of the old. The idea for this film was not to compare training regimes, but to invite people on a journey whose goal is to get moving. Life means movement. Democracy means as many as possible. To take responsibility for the consequences of our actions means all of us. One thing is clear: Our Western model of a so-called modern, progressive society has faltered and reached its limits. It is neither honorable nor responsible." 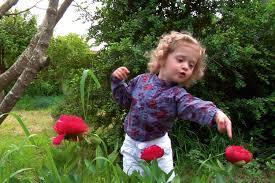 Wagenhofer suggests that if we remove the competitive elements from a child's education, the results might be happier, more confident, and more fulfilled adults. As examples, he interviews Thomas Sattleberger who, after a long and extremely successful career in human resources, expresses his disappointment in the quality of job applicants entering the market. The filmmaker contrasts Sattleberger's assessment by introducing audiences to actor/teacher Pablo Pineda Ferrer, who was the first student in Europe with Down syndrome to obtain a university degree. 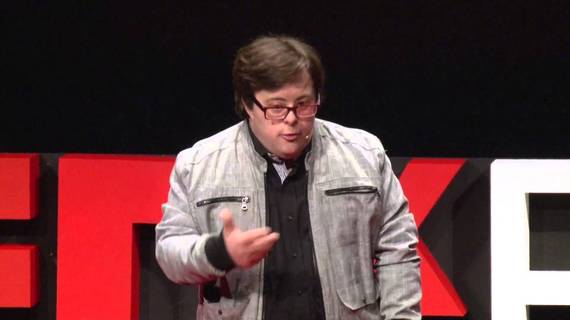 While there is a great deal of input from talking heads, nothing quite matches the sad fate of young Patrick Kuhn, a security guard with no future who can barely afford to pay his expenses. For me, the most valuable segments of Wagenhofer's documentary were focused on the work of Arno Stern, who has helped children explore their artistic impulses through painting since he entered an institute for war orphans in 1946 at the age of 22. Since then, Stern's Closlieu has thrived as "a space designed to stimulate and protect the emergence of formulation." 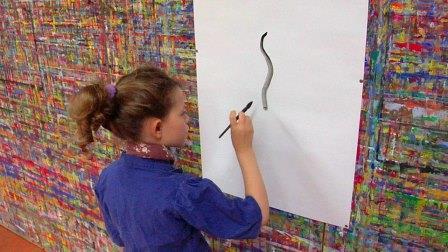 A child begins to paint a drawing at Arno Stern's Closlieu

Perhaps even more interesting than Arno Stern is his son, André, who was given a great deal of freedom as a child and never really had a formal education. However, after asking to be allowed to serve as an apprentice to a local luthier, he has become an extremely confident man (as well as a talented musician, composer, speaker, and journalist).

Wagenhofer's willingness to focus on people like André Stern and Pablo Pineda Ferrer as exceptions to the rule easily highlights some of the failings of educational systems which have been largely designed by adults interested in serving the needs of industry rather than the needs of children. His theory that eliminating traditional forms of competition from the standard curricula might yield more well-rounded and happier students offers plenty of food for thought.

But what about the truly gifted child? What about the adolescent who has become intoxicated with an art form to the point that he hopes to build his life around it? What happens when a child who has thrived on competition, flattery, and an inflated ego runs into a solid wall of criticism and rejection?

While a father's suggestion that a budding young pianist needs to have a back-up plan (and some friends who are not totally immersed in the world of music) comes from a place of genuine parental concern, what happens when a gifted child learns that he's nowhere as good as other youngsters who are not only more talented, but far more disciplined. What kind of return on investment can that child (and his family) anticipate? 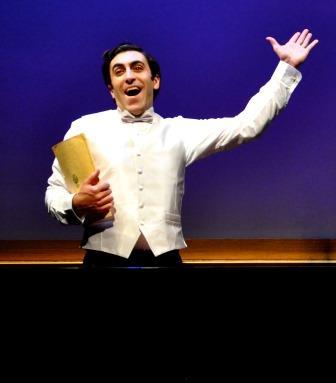 That's pretty much the gist of 2 Pianos, 4 Hands, which was recently given a poignant production directed by Thomas Frey down at TheatreWorks in Mountain View. Written by Ted Dykstra and Richard Greenblatt, the play premiered in Toronto in April 1996 at the Tarragon Theatre and has since toured extensively (I was fortunate enough to see them perform 2 Pianos, 4 Hands when its creators brought their production to the American Conservatory Theatre in 2000).

Not only does 2 Pianos, 4 Hands do an excellent job of covering some not-so-wonderful moments in a young pianist's life, it offers keen insights into some of the frustrations felt by parents, music teachers, and budding musicians when the child's output and dedication might not reach the standards necessary to be accepted into a music conservatory or even think about a career as a concert pianist. Initially, Greenblatt was surprised by the play's success.

Too often, everything becomes about 'making it' or being a star. We were convinced it was just going to be for music nerds or (even worse) piano nerds. But at our first workshop presentation we had a good friend who happened to be the Manitoba Junior Tennis Champion. He said 'The show's not about piano at all, it's about tennis.' The art is bigger than the individual. There are the geniuses, for sure. But just because you're not a concert pianist, does that mean you shouldn't play for your own enjoyment and allow the beauty of the music to fulfill you? 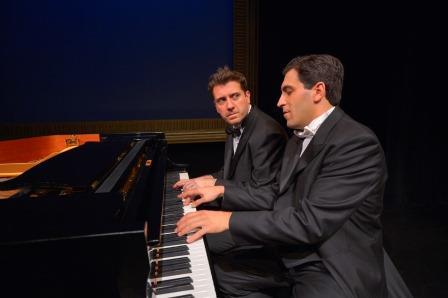 2 Pianos, 4 Hands does not merely require two men who are technically strong pianists. Each must be able to morph from one role to another (student, teacher, parent, etc.) while playing a game of musical chairs as he moves from one piano to another. The writing is crisp, concise, and allows both performers to portray a wide variety of personalities through their acting and the way they attack the piano. 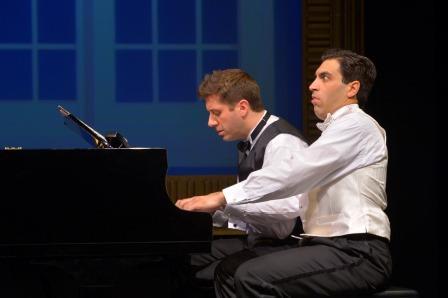 Darren Dunstan and Christopher Tocco deliver beautiful performances as Ted and Richard as they struggle to grow, mature, and face reality without ever losing their love of music. I especially liked the production's handsome unit set designed by Steve Lucas.