"There was real jubilation in the streets the first few weeks. It's still known as the Revolution of the Carnations, and is famous for its civility. I have a wonderful picture of my son, who was six years old, standing in between two young Portuguese soldiers. They're holding rifles, each with a carnation in the barrel and they're smiling. Steve is there holding a sign saying "Viva Portugal". From the outside [of the country] it appeared different from what we saw inside. I don't think Washington really recognized what was happening in the beginning." - Robert S. Pastorino, Commercial Attaché, 1974-77

On April 25, 1974, Portugal experienced a coup like no other. In an era characterized by the clash of ideologies and power players, the nearly bloodless revolution became known as the Carnation Revolution. What began as a military revolution led by the Movimento das Forças Armadas (MAF) quickly became a mass movement of civil unrest.

Dictator Marcello Caetano resisted the independence of Portuguese colonies for as long as possible, forcing soldiers to take de-colonization efforts into their own hands. Much of the planning for the revolution took place outside the country, in places like Angola, Guinea Bissau and Mozambique. The Carnation Revolution led to tensions in Portuguese-U.S. relations as the American government believed a Communist victory was imminent. The revolution ended in the peaceful overthrow of Caetano and the Estado Novo or the Second Republic, which had been the installed in 1933 and was the longest surviving regime in Western Europe. 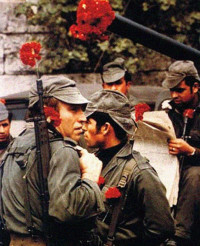 The Carnation Revolution introduced a new Constitution, the end of Portuguese colonialism, as well as civil liberties which had previously been banned under Caetano's government. Today, April 25 is celebrated as Portuguese Freedom Day and is also the name of Lisbon's version of the Golden Gate Bridge.

As we approached the downtown station, I looked up and saw this whole line of tanks along the train track with troops with guns out on the top. I thought perhaps the troops were on maneuvers or something.

We were caught flat-footed and had no inkling that the revolution was coming. As I disembarked at the Central Station I heard the crack of rifle fire. I said, "Uh-oh," alerted the embassy and took a cab there right away.

Young army captains and majors and officers from the other services who had been stationed in the colonies made the revolution. Within a few days, rebelling troops had taken over the country. The elite fled, including the Espirito Santo Silva family [founders of the Banco Espirito Santo], and many of the bankers and regime supporters.

None of us knew who these young officers were, what they wanted and their ideological orientation. They were complete unknowns, to the diplomatic community at least. They planned their revolution in secrecy while in Angola, Guinea Bissau and Mozambique. They snookered the whole government, taking over in a lightening blow with very few casualties.

This was at a time when the world was pressuring Portugal to begin the decolonization process. The colonies around the world were more than ten times larger than Portugal itself and Portuguese troops had been fighting stubborn guerrillas for years. Men were dying and there seemed no end in sight. The wars cost the country much money, which could have gone to alleviate pressing poverty at home.

Caetano resisted ending the wars and pulling out, so the young army officers took matters into their own hands. The revolution was to speed up decolonization, end the wars via negotiations, and improve socio-economic conditions at home. They also wanted Portugal to join the nascent European Union. Our dilemma was that Portugal belonged to NATO and its ministers had access to NATO secrets.

The revolution scared our government. Was Portugal going communist? Would it fall into the Soviet orbit? The uncertainty was a big deal for Kissinger and our President. Some observers gasped that, Oh my God, the Communists have taken over a European country! That's because some of the officers appeared and spoke like Maoists, they really were far left. The head of the military, General Antonio de Spínola, supported the revolution but was a moderate.

Soon it was evident that there were tensions between the junior officers and their seniors. The extremist spokesman was Otelo Nuno Saraiva de Carvalho, who we thought was a Communist and who became our nemesis.

Anyway, Kissinger didn't like the reporting that was coming out from the Ambassador that basically said this is not a Communist uprising but a nationalist one, which stemmed from frustrations with Africa's policy. 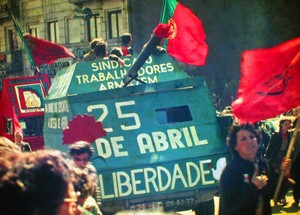 On May Day, 100,000 Communists passed by the embassy chanting ["The people united can't be defeated!"] Where did they come from? A couple of days later [then Secretary General of the Socialist Party] Mario Soares came in with 100,000 in his rally. He'd come in from Brussels, and was the Socialist leader. And then several conservative parties popped up. All these parties had been banned under Caetano....

POST: To me it was a very satisfactory kind of coup to have. Because on the night of the coup, the new Junta of National Salvation was introduced to the Portuguese public on radio and television. In the five-man junta, two were close friends of mine; one was [Francisco da] Costa Gomes, Chief of Staff of the army. He had been the Commander of the forces in Angola when I was Consul General. He was probably my best contact when he was there.

I would go to him and the line I took with almost everybody, among the officials in Angola that is, was that U.S. policy is going to be somewhat determined by what I report about developments here. Now you have it in your power to tell me what is actually happening, or you can take the risk that I am going to have to be reporting hearsay. It worked with him, but it didn't really work with anyone else. But he gave me a lot of information about the military situation which was quite accurate.

The other guy who was one of the five-man junta was a real ne'er-do-well. He was a retired Air Force general. Young but retired. Some scandal, that apparently was to his credit as far as the revolutionaries were concerned. All of a sudden he's a part of the junta. So I have two of the five who I can immediately approach directly. Now, that's pretty unusual.

Of course the reason for it was the majors and captains who carried out the coup were basically apolitical types. The Portuguese army was not the kind of place that attracted very many of the left side of the ideology camp and it was a disciplined army.

Then we had this other problem of trying to persuade Washington that these were not communists. "Write Portugal off. It's finished." We were arguing that these guys are apolitical. The one thing that they know about the United States is that we supported the last government. Therefore they had to be somewhat suspicious of us. And we should allay that suspicion by welcoming this revolution in any way we can, including coming forward with an aid package for Portugal. Above and beyond what we were doing already. 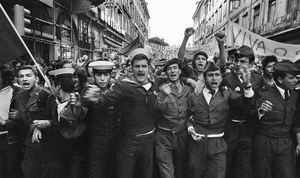 Well, we argued that until we were blue in the face to Henry [Kissinger]. We made very little headway with that argument although we made it repeatedly.

Finally, two things helped to bring it about. One was that we had a visit by [Senator] Teddy Kennedy. He went back to Washington advocating that we support this revolution. And I think Henry Kissinger could see policy getting taken right out of his hands by Kennedy, or the threat of that.

The other was that we stepped up the ante in our reporting, saying that if we don't do this, because we fear the country is going communist we may well be acting out a self-fulfilling prophecy. I think that that hit home.

On December 11th of 1974 -- I remember it because it was my birthday -- we got a telegram: "You may inform the President that we are going to provide aid."

There was a lot of pulling and tugging. The coup installed General Spínola ultimately as President. In his book he had advocated some change in the overseas territories, but what he ended up insisting upon was that there should be free and fair elections, that there could be independence but there should be the option of staying with Portugal. He thought that option would win. But it would be a voluntary association. 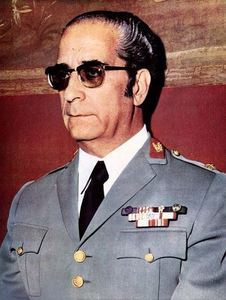 It became clear that he was of an older school of thought than they were. So there was a tussle going on between him and a group that was gradually coalescing, as the people who were the heart and soul of the coup, the planning force, who were quite clearly farther to the left than he was. He was very far to the right. So although they were to the left of where he was, they were certainly people we could still deal with. And we did.

There was then the question of elections. Of course the people who were about to write Portugal off assumed that there never really would be free and fair elections, but that these army officers would skew things in favor of the Communists and they would win.

They went ahead and did hold elections and the Communists did not win. They did not win more than 20% of the vote. It was the Socialists, people at the center and the right that came up with the big majority. That was a clear indication that the people of Portugal were people who wanted to stick with democracy in the West and all the rest of it.