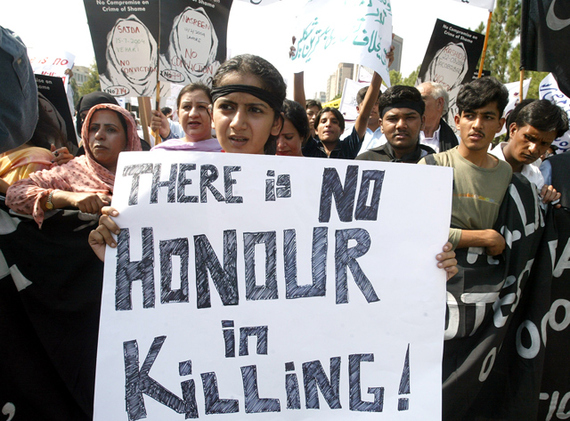 Honor killings in Pakistan have climbed to an acme in recent years. Every year, countless girls and women, naïve otherwise, are persecuted as a consequence of having relationships with individuals of their own choice. Historically speaking, this gruesome crime, which plagues every nook and corner of Pakistan, sparing none, has deep roots within and a profound connection with the way feudalism operates and has always operated in Pakistan. To elucidate further, let's take a brief glimpse into Pakistan's oblivious past.

Traditionally, wealthy feudal lords possessed wide stretches of lands, and in an era of materialistic aspirations and ideals, having such possessions was unanimously considered a source of ultimate power. Since these feudal lords soon grew well accustomed to the blandishment that sprouted from their acquaintances, they felt that the ultimate source of power rested in their domain. In the same context, they felt, not surprisingly, that their sons, daughters, and wife, who were their blood relations, ought to succumb to their ultimate dynasty, which never was. Therefore, these bigoted, uneducated and unambiguously parochial perpetrators barred their daughters from marrying the men of their choice. In their world, every choice, regardless of its nature, was theirs to make; every decision, regardless of its implication, was theirs to take. Thus, every now and then, whenever any feudal lord was intimated about a breach of his power, he would jolt awake. Unfortunately, this breach mostly came from their daughters who were now growing in a more accepting world overall, refining their tastes in who they chose for their lives and how they desired to live their lives. But in their forefather's domain, this idea of liberty for women only had nefarious implications. Of course, allowing a woman to be self-dependent leads solely and categorically to her fostering a morally weak character, right? And if so, how can we possibly allow our daughters to be self-cognizant, aware of their surroundings and future, and in-turn to marry the man of their liking?

Fast-forward a few decades, and Pakistan is still there--stuck in an episode of patriarchy that not even God can question. Honor killings have always been a bane for Pakistan, but people have recently become more expressive in the aftermath of Qandeel Baloch's murder at the hands of her own brother. And guess what? After being put behind the bars, Qandeel's murderer exclaimed that he was happy and "proud" that he killed his sister, manifesting a wide, sated grin that masked any hint of regret. His justification? Well, other men wrote "wrong" comments on the semi-nude videos that his sister uploaded. But dare I ask, who was HE to hold Qandeel accountable? A brother with his so-called sacred "honor" at stake, or a money-mongering goon who lived off Qandeel's income, and then back-stabbed her himself?

Whatever the case might have been, there is a riveting conclusion that ganders coldly in our eyes: there is an urgent need to set a death-penalty, or a similarly punitive penalty, for men or women who murder under the name of honor. And I say this based on sound reason. Islamically, the family of a murdered victim can spare the murderer in exchange of money. Since several religious groups in Pakistan exert pressure on the government every so often, the government ends up passing laws that are in compliance with the sharia, but without paying any regard to the context the sharia was written in. Thus, conventionally, the rich and wealthy are set assail into an open world even after they have committed something as heinous as murder.

Honor killings need to end, whatever the reasons, by hook or by crook.

Their time is over; the time to make amends is now.