JPMorgan Chase CEO Jamie Dimon knew what he was talking about when he said that "large corporate America is in very, very, very, very good shape." It's a crude and insensitive remark, but an accurate one.

Unfortunately, the rest of us are still paying for the party. We bailed out the big bankers once, and if Dimon has his way we'll probably be forced to do it again. Despite his company's record first quarter, he's complaining. He thinks that asking banks to cover the cost of their own potential failure is "punitive." Dimon, once known as the "Democrats' banker," is throwing more cash to the GOP these days, and in return his wishes are being slavishly carried out by the likes of Mitch McConnell.

How dangerous are Dimon and his colleagues? Using data from Robert Litan's valuable study of derivatives, as well as source data from the Comptroller of the Currency (plus some handy tips from Mike Konczal), I put together some pie charts.

1. "Too Big to Fail" is Worse Than You Think

The misuse of derivatives nearly brought down the economy, and the concentration of these instruments in a few hands forced the government to bail out their holders. Are we any safer today? Here's the market share held by the top five banks trading in derivatives: 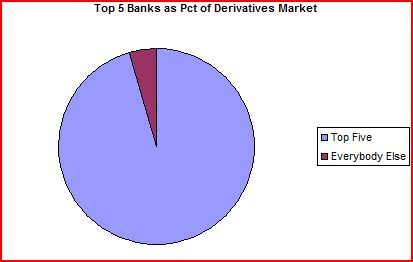 No, your eyes aren't deceiving you. The top five banks hold nearly 96% of the entire derivatives market. And we're not talking about small numbers here. The projected value of the market in over-the-counter derivatives is over $500 trillion dollars. (In "real" terms it's $3.3 trillion, which isn't chump change either. Here's a good explanation of what figures like these really mean. Short version: It's a lot of money.)

These "too big to fail" megabanks make up what Litan calls the "Derivatives Dealers' Club." Led by Dimon, they have the motive and the will to impede meaningful change -- and to do an end-run around whatever rules are eventually passed. Who are these "dealers"?

Here are the top four traders in derivatives (number five is much smaller), along with the share of the market they command. Notice that each one of them individually is bigger than "everybody else" put together. 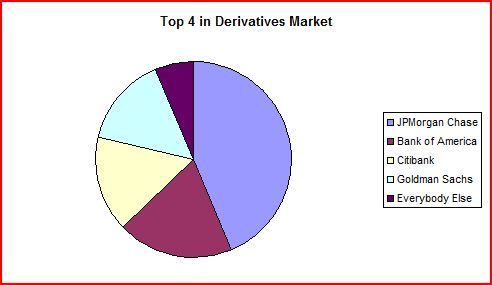 If you're inclined to be impressed by Dimon's competence (which impresses mainly because basic competence seems to be rare in bank CEOs), look at the other companies in this chart. Ken Lewis at Bank of America and Chuck Prince at Citigroup were textbook examples of runaway in-competence. For that matter, so was Citi's "strategic" guru Robert Rubin. As for Goldman Sachs, that would be the same Goldman Sachs that just got indicted for securities fraud by the SEC. How safe do you feel? 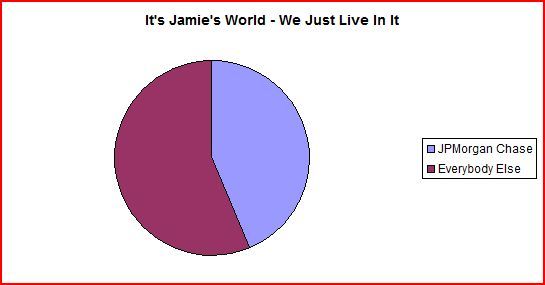 A single bank, JPMorgan Chase, has 44% of the derivatives market. This is the concentrated power and leverage that Dimon's fighting to protect. That's one reason why Simon Johnson calls him "The Most Dangerous Man in America". Moreover, as Johnson points out, Dimon knows how to present a great PR case for this irresponsible financial structure he represents. He's the friendly public face of a dangerous and greedy system.

And for you Dimon fans out there, remember: He's not going to be in the job forever. There could be a Chuck Prince or Ken Lewis waiting in the wings even now.

4. Here in the Real World

While Dimon's doing the victory dance - "large corporate America is in very, very, very, very good shape" - how's the rest of the country doing? These folks aren't doing so well: 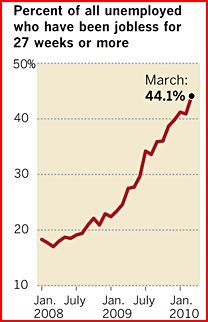 Long-term unemployment is at levels we haven't seen since the Great Depression. These 6.5 million people face a future where they may never be able to return to the lives they once enjoyed.

5. Who Are the Unemployed? 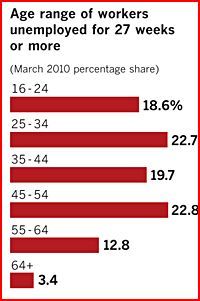 (source for this slide and the one above: Bureau of Labor Statistics)

44% of all jobless people meet the definition of "long-term unemployed." Many of these people are too old to realistically start over. Their lives have been ruined. As for the wonderful state of large corporate America that Dimon celebrates, it came in part because Fortune 500 companies laid off more than 800,000 people in 2009. For these people, life is "very, very, very, very" grim.

That's the damage caused by greed. Here's the danger: George Soros says another, bigger crash is coming. (via ZeroHedge) Three of the Federal Reserve's regional heads say that we need to do something about "too big to fail" banks. The centralization of risk and power is leading us right into another disaster. We need to get the banking oligopoly under control. But Jamie Dimon is fighting back tooth and nail.

Richard (RJ) Eskow, a consultant and writer (and former insurance/finance executive), is a Senior Fellow with the Campaign for America's Future. This post was produced as part of the Curbing Wall Street project. Richard blogs at: