I apologize in advance to my readers for what may seem a retread. While much of what is written in this article is in my previous post, it is necessary to the point I am trying to make to repeat some things. If you can stick with me there is more here. 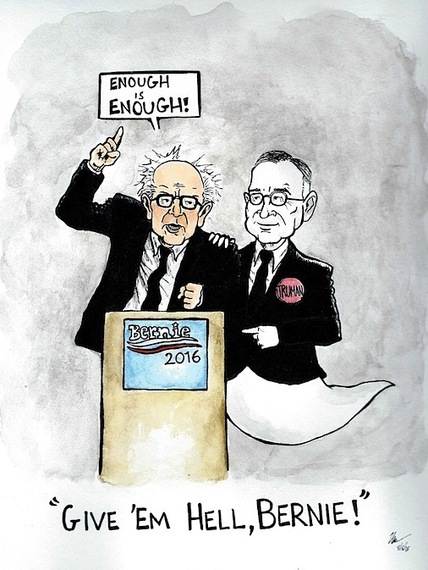 Bernie Sanders can win--not just the primary, but the general. Democrats should back him, and ignore the arguments made by Barney Frank and others, who say giving Hillary the nod early is the only hope for victory in 2016. This timidity, a relic of the Democratic Party's weakened state following the Reagan realignment, is astounding in the face of the most favorable political environment in nearly 50 years.

As I wrote last time, the United States is in the midst of another realignment, this time away from the GOP. The Occupy Movement brought wealth inequality and systemic corruption due to the influence of money in politics, to the forefront of the national discussion. These issues galvanized the electorate against the Republicans in 2012, and they'll do it again in 2016 and probably 2020.

The answer as to why that is? The GOP does not address these problems because it does not accept them as problems. History has shown that any time there is a major national issue like slavery or civil rights, or in this case what I mentioned above, and one or both parties do not address it, there is a realignment of the electorate.

Republican economic policies had a difficult enough time connecting with Americans even at the height of party's popularity--George H.W. Bush called them "voodoo economics." This is why Republicans had to couple them with xenophobia, race baiting, and religious fundamentalism to build a large and vocal enough coalition to win (the New Deal was incredibly popular in the South).

But now demographic shifts have outpaced their strategy, and left their target region politically marooned, as we saw in 2008 and 2012. Cultural changes have crippled the party outside of the Southern states. Racism, even with plausible deniability, is toxic. Sex positivity and youth culture have bankrupted the morality claims made by social conservatives; acceptance instead of tolerance has tipped the scales against the Republicans.

Worse still, laissez-faire economics are under the scrutiny after the Subprime Mortgage Crisis and the Occupy Movement. It has come to point where even the Koch Brothers are trying to rebrand themselves and the GOP with populist rhetoric.

But the Kochs aren't the only ones on the right to recognize these problems. The Republican establishment is beginning to realize that the only hope for long term survival (restricting voting and keeping elections about money are not long-term solutions) lies with the Latino population. A hardline stance against immigration will alienate America's fastest growing voting block, and moderate whites as well. As a result of this future problem, some Republicans are starting to change their tune on immigration reform.

On the other hand, the base of the party is in full rebellion against this perceived new direction, and is embracing hardliners like Donald Trump. Now, in order to win the primary, the Republican candidates have to appeal to this demographic--which is detrimental when we get to the general election. This predicament isn't lost on the Kochs, who seem to want to sink Donald Trump.

The GOP's biggest problem right now is keeping the party together. The Tea Party and the base are likely going to split off if an establishment candidate wins the primary. Mr. Trump, for all of his seemingly thoughtless, bulldozing statements, has picked up on this coming split, and threatened to run as a third party candidate.

A party divided cannot win. The Republicans face a bigger divide between the establishment and the base than the Democrats do between progressives and moderates.

With the opposition imploding, Democrats can look forward to 2016. However, many are rushing to support Hillary Clinton out of fear that Bernie lacks broad enough appeal to win a general. This argument is unsupported. Hypothetical match ups with the GOP field show Sanders is competitive, and unlike the Republican candidates, the debates are not going to hurt his appeal in a general election. Bernie is also gaining momentum steadily across the country--especially in swing states.

Clearly his message resonates with the American people. It also reverberates throughout history. Bernie's a throwback to a Democratic Party past; the New Deal Democrats, who implemented policies that built the middle class, and made the GOP a minority party in Congress for a generation. Bernie's ideas aren't new or even radical: they're the logical continuation/expansion of these popular existing programs.

Studies have shown Americans prefer Democratic policies to Republican alternatives, but prefer Republican rhetoric. For a Democrat to win he or she must convey their specific goals effectively, and Sanders has proven he can do just that. 3) The Democrats need to recapture the frame, and Bernie may be the only one who can do it.

My last point of consideration might be controversial, but I do not think it should be. It is time for blue voters to give up the Clinton/New Democrat legacy--at least when talking amongst ourselves (or when voting in the primary). Bill Clinton's best accomplishment was getting elected twice, and presiding over an economic boom cycle. This is an achievement since no Democrat had won reelection since FDR. However, the damage he did can hardly be understated, though much of it may have seemed inevitable.

It was Clinton who conceded the narrative to the GOP; that there is too much government hindering the markets, and there are too many people dependent on said government. He is responsible for the deregulation of the banks that led to "too-big-to-fail," and contributed to the Subprime Mortgage Crisis. He is also responsible for mass incarceration thanks to his omnibus crime bill. And of course, his "welfare reform" was no prize as it resulted in fewer people receiving less in terms of vital assistance.

While I believe Hillary Clinton would absolutely make a better president for working Americans than any of the austerity-pushing, deregulating Republicans, she's too similar to Bill on important issues. Inside sources suggest that when it comes to the banks, Clinton wouldn't end "too-big-to-fail." She's probably a step to the side of President Obama (who, as I said last time, has laid the groundwork for a progressive president) but she's not really a step forward.

And the Democrats need to move forward. We do not need another president who straddles the line between two narratives. After 40 years of Republican economic dominance, our Middle Class has suffered. We've had two major recessions, and we're still struggling from the last one. For the sake of the country, and the party's sustained success, the Democrats must convince people that government can be smart and well run; that it has a place in regulating the markets to ensure healthy competition, and a place protecting social mobility; that welfare programs are not bankrupting us, but systemic handouts to the rich and powerful are. In order to achieve this, they must pick the strongest candidate who will communicate these points, not only in words, but in policies.

While I am all for Bernie, I do recognize his one flaw: opposition to the superPAC. For better or worse, money will play a huge role in this election. While Bernie's received more small donations than any candidate running, he's probably going to need PAC money eventually. Name recognition is crucial to any campaign, and ads are an effective way of getting it because candidates cannot be everywhere at once. While I support his push for publicly financed elections, Citizens United, and the modern interpretation of "social welfare" (what nonprofits can do) are not changing by November 2016--which is partly why we need Bernie in the White House in the first place!

That said, all things considered, to fight to give Hillary the nod over Bernie places the game of politics over the substance of it, without any real support for such a position. Bernie Sanders should be the nominee for president. Let the cards fall as they may.

Lori Loughlin Hugs It Out In First Acting Gig Since Prison