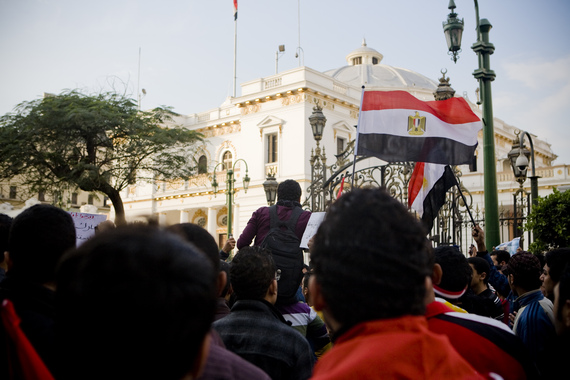 On Monday, February 23, two Members of the Egyptian Parliament -- businessman Mahmoud Khamis and controversial TV anchor Tawfik Okasha -- physically attacked two reporters who were covering the running parliamentary session. According to Khamis, it was "impolite" of the photographer from Al-Watan newspaper to photograph Okasha, after he was expelled from the hall for repeatedly interrupting the parliamentary speaker. Okasha also criticised the speaker and called the journalists at the session 'police informers."

The journalist syndicate responded the next day by calling on all reporters to boycott the parliament, as it is "the role of the people's representatives to defend citizens" rights, not to assault them and those who transmit the truth," adding that the syndicate will not tolerate the repetition of such violations. Newly elected Parliament Speaker, Ali Abdel-Aal responded by expressing his deep respect for the media, and urged the journalists syndicate not to boycott the parliament.

This is only the latest development in a quickly deteriorating situation of, arguably, Egypt's most important institution of modern times. Last month, precisely on January 12th, during only the third session under the newly elected parliament, speaker Ali Abdel-Aal announced the temporary ban of all live news broadcasts of the legislative body's sessions. This decision was made by the parliament following a quick vote, after the world and social media had witnessed in ridicule as the first two sessions of this institution's history were marred by insults, confusion and absolute chaos. This decision was also made by the parliament in spite of the fact that 81% of Egyptians, the people that the parliament represents, are in favor of live televised sessions, according to a recent Baseera poll.

The ban arrived at a crucial time for Egypt, as the parliament, the first under the new constitution and under Abdel Fattah al-Sisi's presidency, was on the verge of beginning the process of reviewing and ratifying almost 340 laws and decrees issued in its absence during the past three years by the current President and former interim President Adly Mansour. Some of these laws carry huge significance for the future of the country, including the civil service law, the investment law, the law on the Suez Gulf economic zone and the criminal laws restricting freedoms and civil society.

The decision to ban the broadcasts was met with widespread criticism and even a lawsuit by the Association for Freedom of Thought and Expression (AFTE), citing Article 120 of the constitution: "The sessions of the House of Representatives are held in public. The House may hold a closed session based on a request by the president of the republic, the speaker of the House, or at least 20 of its members. The House will decide by majority whether the debate in question takes place in a public or a closed session ." However, Abdel-Aal denounced the performance of some cameramen at the sessions and defended the decision, claiming that it does not contradict the constitution, as select members of the media will still be allowed to cover the sessions, while the main parliament channel (Sawt Al Sha'ab or Voice of the People), owned by the state, will broadcast select recordings of the sessions.

Nothing changed after President al-Sisi's speech on February 7, which means that the closest foreseeable date for the return of the broadcasts is the day on which the parliament finalizes its internal bylaws. As you can imagine, these bylaws will be critically important in determining how the parliament will function for years to come. Egypt's cabinet was supposed to present the government's programme to the parliament either by the end of February or in early March when the bylaws are agreed upon, but according to Minister of Legal and Parliamentary Affairs Magdy El-Agaty, the date of this critical session will probably also be postponed, as the parliament is extremely slow in approving the new bylaws.

This indicates that the parliament has a huge task ahead of it. In addition to ratifying the almost 350 laws, approving the internal bylaws and voting on the cabinet's program, all within a couple of weeks, the legislature also has a host of other issues to deal with. MP Tawfik Okasha is being investigated for insulting the Speaker of Parliament on Monday. Fellow controversial MP Mortada Mansour is wasting crucial time attempting to have one of the most popular political talk shows on Egyptian TV, AlQahera Al Youm, suspended for personal issues with the host, Amr Adib. Furthermore, the president has just ordered the Interior Ministry to submit urgent legislative amendments to parliament within 15 days that will address increasing police abuse against citizens, after several protests against police violence erupted last weekend in response to the murder of a taxi-driver by a policeman. Former MP Sirri Siam also had his resignation accepted, becoming the first MP to resign from his post in the new parliament. All of these events have occurred during the past week only, and it doesn't seem likely that they will be stopping any time soon.

It is extremely important that the parliament, despite the chaos that it is trying to hide from the eyes of the world, resumes broadcasting its sessions live for the public to view. Egypt is going through a critical period that will define its future path and determine its success or failure. The laws being ratified and the bylaws being approved will exist for the unforeseeable future, and it is only right that the public take part in this process. It is ridiculous to allow the parliament to pick and choose what it would like the public to see. This almost guarantees the withholding of facts and the manipulation of the information that is being released to the public. Even the select journalists allowed to cover the sessions are being intimidated by MPs, something inconceivable in any democracy around the world.

A public discussion and debate must take place around the present talks in parliament, as isolating the people from their representatives will only serve to increase anger and resentment in the streets. Egypt is facing the problem of making the concept of citizenship a part of the democratic process, and this is directly linked to developments in communication. Parliamentary channels are key to democracy and the full exercise of citizens' rights -- and it is therefore imperative that transparency be restored to the legislative body that represents the people.

It is worth mentioning that Egypt is not the first country to face this dilemma. In 1979, when the United States House of Representatives first began televising coverage of its daily sessions on the network C-SPAN, the Senate originally opposed live televised coverage. Many Senators expressed concern that televising proceedings would significantly change the conduct of the legislative process. In 1986, however, Senate floor leaders officially proposed live television coverage of the Senate and in June of that year, daily proceedings began broadcasting on the C-SPAN 2 network. The US has never looked back, as its public became more involved in the political process, while members of congress took their job more seriously, in knowledge that their constituents are actively watching them. Today, live sessions are also available on TV or online in most developed and developing countries, including the US, the UK, Canada, Holland , and, shockingly, even the Palestinian Territories.

In June 2006, "the importance of providing more information on and increasing coverage of parliamentary activities was underscored by some 200 participants from 80 countries at the Conference on Broadcasting of Parliamentary Business through Dedicated TV Channels and Public Broadcasting Systems ", which was convened in Geneva. This only serves to confirm the notion that allowing the public to view parliamentary sessions on air is a crucial ingredient for any successful democracy.

Unfortunately, there is a wave of opposition against the return of broadcasts from within the parliament. MP Mustafa Bakri was quoted by Shorouk newspaper as saying: "The decision was made to limit disturbances and to prevent some MPs from exploiting live coverage to put on a show." Meanwhile, MP Osama Heikal has insisted that the ban on broadcasting will continue, while claiming that: "No parliament in the world broadcasts its sessions live, but rather, they allow media to attend the sessions and deliver reports on them to the public." This is, clearly, a lie.

It is imperative that the Egyptian people not allow a few MPs to ruin any progress that might come out of this parliament. It was never an expectation that MPs like Mortada Mansour, Tawfik Okasha and Mostafa Bakri would offer much in respect to freedom of speech to this country, but it is scary to see these radically right-wing conservative individuals dominating the parliament and deciding the direction it will take in drawing Egypt's future, without any kind of public resistance or awareness. If the people of this country are again denied the right to define their own future and select their own path, then it is very likely that history will repeat itself.

It is up to the liberal and moderate factions within the parliament to put an end to the increasing elements of fascism and totalitarianism that were not even present during the Brotherhood-controlled legislature of 2012. Let's not forget that even then, the public was allowed to view every single minute of parliamentary sessions live on TV -- so this decision represents, even by those low standards, a huge step back. Laws must be written for the people by the people, and without the public's oversight, private interests will almost definitely influence the performance and voting of MPs who will have no one to answer to. After all, how are constituents expected to evaluate the performance of their representatives, and base their following vote on it, if they are clueless as to how the latter are performing in session?

If this were a democracy, I would call on all readers to contact their districts' MPs by phone and mail and demand that they propose re-establishing broadcasts of parliamentary sessions before, or at the very least on, the date that the cabinet presents its programme to parliament... but who are we kidding?