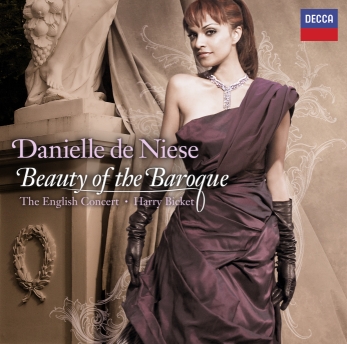 With the evolution of the marketplace, the ever-changing template of how we make, spread and share our music with the public, not to mention the ever-present jaded skeptics who project total doom over the recording industry as a whole (how many times have we heard that the record business is dying?), is there still a relevant case to be made for artists making recordings?

As I release my third album, Beauty of the Baroque, on Decca Records, I would like to answer this question with my own personal experiences.

I have been singing since the age of six. My opera debut came at the ripe old age of 15 in the lead role of a new opera at Los Angeles Opera. I had the incredible opportunity to debut on the Metropolitan Opera stage at the age of 19, making me one of the youngest singers in history to debut on that stage. These stories were talked about, and news of my early successes in opera spread quickly amongst the musical community. But what about the rest of the world? What about people who were new to opera? What about people who hadn't yet seen me perform? The biggest chance I had to reach those people came only through the opportunity I had to sign an exclusive recording contract with Decca Records and Universal.

There are many wonderful artists in the world today and so few get the chance to make recordings. My contract with Decca and Universal is to this day one of the most important gifts of my career and it's a responsibility I take very seriously. I was very young to have record companies knocking on my door at 25 years old. I realize that compared to Miley Cyrus and Justin Bieber, a 25-year-old singer would seem practically washed up, but in the world of opera singers, it's like being plucked for stardom right from the womb itself. I was aware that starting to make recordings at such a young age would mean that since my voice wasn't fully grown yet, I would be essentially "growing up" in the public "ear" (as it were). Every technical growth spurt, every vocal "pimple" would be publicly broadcast for all to hear. I signed on the dotted line understanding that my career on disc would be a bit like The Truman Show, with me in Jim Carrey's role.

This life-changing choice was everything I expected and more. The learning curve is extreme when it comes to understanding pacing during a recording, not unlike being dropped off by helicopter at the top of the Matterhorn for your first skiing lesson. I also learned that critics wouldn't care at all about age and the natural progression of a growing voice: at 26, I was held to the same standard and expectations as hugely accomplished stars like Cecilia Bartoli and Renée Fleming, whom I idolized.

Because making recordings isn't about running the perfect race your first time out of the gate, nor is it about playing it safe to avoid criticism. For me, it's about collaborating with musicians I deeply admire, making music together -- which is a unique result of that particular collaboration -- and documenting that experience, crystallizing that moment in time and sharing it with music lovers across the globe.

I chose to make my new album an homage to Baroque music -- I have long wished time travel really existed (Doc Brown's time machine from Back to the Future was my template as a little girl) and I wanted to make an album that felt like a time capsule, the type of jewel you would find in a treasure chest at the bottom of the ocean.

I grew up singing Purcell and Bach and was attracted to the melodic simplicity of the Baroque. Those tunes were really catchy! By the time I entered New York's Mannes College of Music, I was already thoroughly grounded in music theory and piano. I studied for 8 years at the Colburn School of Music while attending Crossroads School for Arts and Sciences in Santa Monica as a music major. Working with the Mannes Camerata taught me a lot about Baroque performance practice. Even today, my appetite for the musical and intellectual qualities of the Baroque is insatiable.

Though much of Baroque music exists in its skeletal form, it is in this earliest structure that the bones of musical style were formed, the figured bass and harmonies existing in their purest essence. It has a repetitive, strophic nature, many times with passages that are reiterated with ornamentation or embellishments of the original vocal line -- similar to improvising and scatting in jazz. The freedom within this structured form gives me the opportunity to flesh out and fill in the colors of the text as I feel and experience them. A recording of Baroque music then becomes the most personal and intimate reflection of one's musical experience and taste as an artist. It's like designing a custom-made suit from the fabric of your own voice. Although this project has been four years in the making, I'm thrilled to have the chance to bring this very personal collection of music to audiences in the form of... a recorded document!

I think this is the reason why Baroque music remains extremely relevant in today's melting pot of musical culture. It exemplifies interpretation at its best.

The tracks I've recorded represent, as I've previously stated, different vivid colors of my musical palette, becoming a sort of matrix that decodes me and denotes who I am. The earliest pieces on the disc (lute and voice songs by John Dowland) romanticize the melancholy of love and envelop you in emotion. One of my favorite arias is more off the beaten track ("Guardian Angels Oh Protect Me" from the The Triumph of Truth and Time) -- it's one of Handel's most sublime and purest melodies. Many of the tracks have extremely personal nostalgia, and recall milestones in my artistic journey: 'Heart, the Seat of Soft Delight" (Acis and Galatea) is a beautifully written aria which I sang in my Royal Opera House Covent Garden debut as Galatea in 2009. It always left me in a flurry of tears when, as Galatea, I grieved the death of my beloved Acis, and released him to nature by transforming him into a fountain.

It was paramount to include some of Baroque music's best known devices which are still heard in music today: I had to include one of Monteverdi's best-known solo songs "Quel Sguardo Sdegnosetto," which illustrates to perfection the ciaccona, a Baroque dance based on a reiterated harmonic pattern and variations set upon a repeated patterned figure of bass notes called the ground bass. This figure is the basis for most of Lady Gaga's songs, by the way...

Arguably one of Baroque music's most famous songs, Dido's Lament from Dido and Aeneas, "When I am Laid in Earth," is a tragic lament that shows off the passacaglia (originating from the Spanish pasar (to walk) and calle (street)), a group of bass notes falling in a descending figure to form a four-note lament -- a structure which is still used by modern composers and songwriters today. Listen to standards like "My Funny Valentine" (Rodgers and Hart) and you will hear how strongly this 17th- and 18th-century Baroque form resonates in modern music. The songs we listen to on the radio in today's world were born in the Baroque period.

There is another important gift that albums can provide: while there is no guarantee that an opera house or performance theater can be erected in every far-flung corner of the world, there is a great chance that through the distribution of recordings, we have the chance to reach out with our music to people who may never come to a live performance. There are people who can't travel because of work or family commitments, people who love opera but can't afford to fly to the opera house to see a performance, or people who are unable to leave their homes due to illness or physical incapacity.

I remember taking a ride to a hilltop restaurant called La Botte Piena in the tiny (I mean tiny) sedate village of Montefollonico, Tuscany. I was busy tucking into an Italian feast when I was suddenly approached by opera-loving backpackers who had never seen me live but had all my CDs! Or once, while in Panama on a desert island, a couple who had wandered into a cinema in Bogota and caught my performance as Euridice in the Met: Live in HD cinema broadcast bought my CD as a result. They were beyond gob-smacked to find me eating pineapple on the beach just 10 yards away! And perhaps most inspiring was reading two of the most moving letters I have received to date from two fans with very different circumstances: an elderly disabled woman in Tel Aviv who, after losing her husband to cancer, wrote that listening to my Handel Arias album had helped her through her loss; and Sophie, a 17-year-old girl living with autism in the UK, who was more worried more about how her parents were coping emotionally with her condition than her own challenges, who thanked me for making an album she could listen to all the time. She felt able to escape the worry by putting on her headphones and traveling far away to the world of Handel and Mozart.

These moving experiences might not have happened if albums were never made, if musicians didn't take artistic risks and document their musical adventures. This is the beauty of making albums.

Soprano Danielle de Niese debuted her first Huffington Post blog last year. She will be chronicling her time in New York City exclusively for Huffington Post as she stars in the World Premiere of The Enchanted Island at the Metropolitan Opera, and launches her new album, Beauty of the Baroque, this week.

Danielle will perform live in New York City's West Village in a special album release concert at Le Poisson Rouge on January 23rd. You can obtain more information on this concert here.

Danielle's new album Beauty of the Baroque is released on Decca Records.

See her in The Enchanted Island at the Metropolitan Opera.

Her autographed CD is available from the Met Opera Shop.