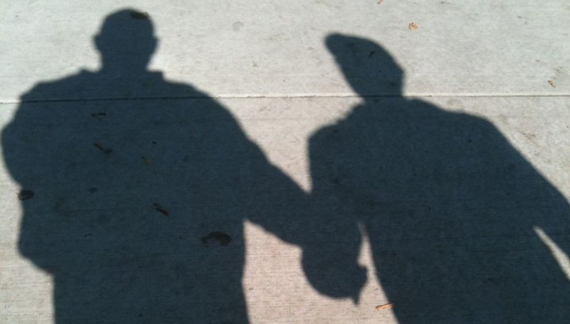 When I wrote my recent HuffPost blog post about bullying and censorship, I received many wonderful comments that were universally supportive and truly a joy to read. One of them, though, came attached to a very interesting question:

Why do you refer to Dirk as your husband? When last you spoke on the matter, you and he had not actually gotten married, despite living in a state where gay marriage is legal. (It would be an entirely different matter if you lived in a state that didn't allow gays to marry.)

While I call Dirk my husband, I do not claim to be legally married. That would be a lie. The concept of marriage as a union of two souls, however, has been around a lot longer than "legal" marriage. For 16 centuries marriage was a private contract between two individuals and their families. The concept of requiring authorization by an outside party only emerged in 1563 at the Council of Trent, but the Protestant world largely rejected this change, and common-law marriage continued to thrive. Only after England passed the Marriage Act of 1753 did the majority of the Western world come to view marriage as a contract between a couple, their families, and the government and/or church.

And then those very same governments and churches started getting into the business of deciding which couples were "fit" to marry and which weren't. Legislatures enacted laws restricting interracial marriage, same-sex marriage, certain interstate marriages, and even the terms under which one could remarry after a divorce. Only now are the last of those measures finally starting to crumble.

Returning to the original question: Why do I refer to Dirk as my husband even though we're not legally married? While the question is simple enough, the answer is rather nuanced, and situational.

Dirk and I are spouses, husbands, partners, mates... all of the above. In a legal context, I call Dirk my "partner." To refer to him as my lawfully wedded husband would be not just misleading but fraudulent; I would not claim "married" status on a tax return, for example. Technically we're "cohabitating same-sex domestic partners," which, besides being quite a mouthful, is sadly the legal equivalent of "single" in many official scenarios. Should we someday decide to obtain a marriage license, we'd be granted thousands of additional rights and protections at the federal, state, and local levels. And we might find occasion to tie that legal knot some day; if we decide to have children, for instance, we'd want that added level of judicial security in order to guarantee certain protections for our kids.

So it's true that Dirk and I are not married in a legal sense. Socially, however, he is my husband. Our families, our friends, and indeed our entire community sees us as married and treats our relationship with a level of reverence and respect commensurate with that granted any legally married couple we know. In this sense, our marriage is just like the "traditional" marriages of old... before the Council of Trent redefined what had been widely accepted for centuries.

On top of that, what my husband and I have goes far beyond just a legal partnership. Marriage, more universally, is defined as a synergistic joining. Concepts, ideas, and, according to Shakespeare, even minds can be married to form a union that is greater than the sum of its parts. Dirk and I, through our devotion to one another, have forged the sort of traditional marriage that our ancestors embraced: a blessed, private contract of two souls, a loving and harmonious commitment of two people to each other, validated by our family and accepted by our community. We don't need a certificate or license from any church or government to tell us that.

So will Dirk and I get legally married someday? Perhaps. But for now, for us, being married is enough.