I say, it is not fair to support killers. 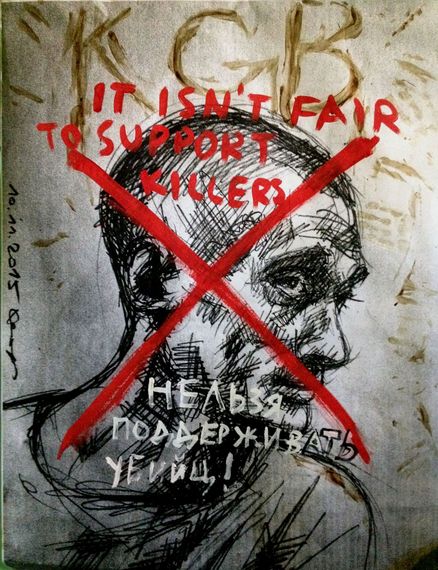 Let's read an interesting critical essay by Nietzsche -- I mean "Nietzsche contra Wagner" written by Nietzsche himself. Nietzsche explaines in this essay why he parted ways with his friend, Richard Wagner. Nietzsche attacks Wagner's views, his conversion to Christianity, perceiving it as a sign of weakness. In particular, he calls Wagner's music degenerative and relates it to a bit by bit degenerating German culture and society.

Nietzsche writes in the essay: 'Enough! Enough! I fear that, beneath all my merry jests, you are beginning to recognise the sinister truth only too clearly--the picture of the decline of art, of the decline of the artist'. The same thing I feel now when I read about Pavlensky and his support of Primorsky partisans. But when I expressed my critical opinion about cop killers in Pavlensky's Facebook, Pavlensky's partner Oksana immediately banned me, mocking my liberal views, despite the fact that I always supported Pavlensky.

Garry Kasparov, former World Chess Champion, awarded Pavlensky the Havel Prize for Creative Dissent. Kasparov praised a lot his "artistic precision and courage". But a decision on awarding a prestigious prize was annulled because the artist had supported the Primorsky Partisans group. Who are the Primorsky partisans? They are not only cop killers. They are members of a band of far-right extremists. By the way, one of the first victims of the Primorsky Partisans group was Aleksey Karas, a police sergeant. He was killed with atrocity-- his body had more than 20 stab wounds.

July 20, the jury of the Primorsky regional court has recognized two Primorsky partisans not guilty on one of the episodes of the case.

According to the Russian businessman Yevgeny Chichvarkin who lives now in London, this court's decision is a sign of the impending catastrophe and a beginning of a civil war in Russia.

"Whereas recognition of the inherent dignity and of the equal and inalienable rights of all members of the human family is the foundation of freedom, justice and peace in the world,
Whereas disregard and contempt for human rights have resulted in barbarous acts which have outraged the conscience of mankind, and the advent of a world in which human beings shall enjoy freedom of speech and belief and freedom from fear and want has been proclaimed as the highest aspiration of the common people.

Whereas it is essential, if man is not to be compelled to have recourse, as a last resort, to rebellion against tyranny and oppression, that human rights should be protected by the rule of law, ...

Now, Therefore THE GENERAL ASSEMBLY proclaims THIS UNIVERSAL DECLARATION OF HUMAN RIGHTS as a common standard of achievement for all peoples and all nations, to the end that every individual and every organ of society, keeping this Declaration constantly in mind, shall strive by teaching and education to promote respect for these rights and freedoms and by progressive measures, national and international, to secure their universal and effective recognition and observance, both among the peoples of Member States themselves and among the peoples of territories under their jurisdiction. "

Chimera of the Law Enforcement

The painting's size is 39" x 47", it depicts a monster with the head of a man, with wings of a bat, a beak of bird, a snake-headed tail and four hands. 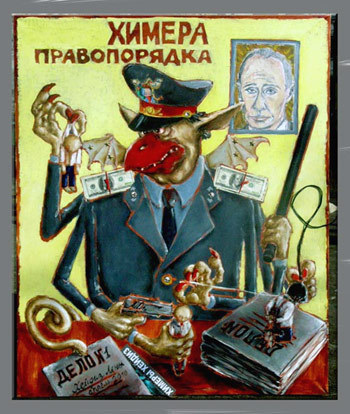 The Chimera of the Law Enforcement by Lena Hades

The Chimera of the Law Enforcement wears a police cap, Chimera's hands hold an electric wire for torture, a tortured man, a gun and a police stick. The oil painting was created by me, Lena Hades, in Juny 2009. The Moscow Times published this painting 6 years ago. 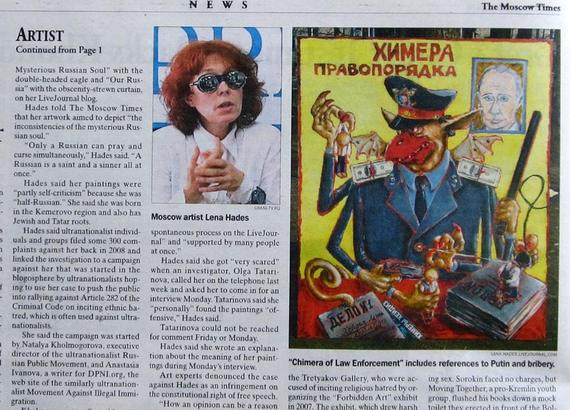 The Moscow Times, the Chimera of the Law Enforcement.

Eva Hartog Skorobogatova, a reporter of "The Moscow Times" wrote about Petr Pavlensky an interesting article entitled "Partisans or Cop Killers? The Fight for Justice in Russia's Far East". "Meanwhile, the Partizany's supporters are trying to correct what they see as a state-run misinformation campaign against the group". Dear Eva Hartog, I would like to pose a question to you, what does it mean -- "a state-run misinformation campaign against the group"? Where did these "innocent guerrillas" get their weapons? I know, this question is purely rhetorical -- in Russia, by the way, there is no free sale of weapons, arms sale to anyone.

Nietzsche writes in the essay's epilogue 'A philosopher feels that he wants to wash his hands after he has concerned himself so long with the "Case of Wagner"'. A similar thought comes to my mind -- I want to wash my hands after I have concerned myself with the "Case of Pavlensky". I repeat it once more, it is not fair to support killers!