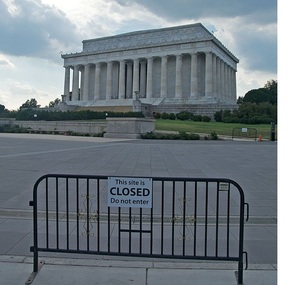 With midterm elections four months away, there are signs that a bitterly polarized electorate will again deliver a government incapable of working together. This is our era's sad twist on the maxim "all politics is local." You can win local elections at the extremes. But you can't govern from there.

Creating effective government is the single biggest challenge facing the country. Dysfunction in Washington is leaving urgent national problems neglected and festering, is weakening American power internationally, and is hobbling the economic recovery, costing by one estimate two million jobs since 2010.

The status quo is ripe for disruption. But who are the innovators who can fix the mess? The answer might determine who next leads the country. Alongside disturbing recent headlines about a deepening partisan divide, there are some stirrings within both parties and in a modest but growing bi-partisan movement that are reasons for hope.

Already, a majority of Americans say they are fed up with dysfunctional government. Although it might surprise some voters, their disgust is shared in Washington. Democrats and Republicans I've known for decades are appalled by a culture where compromise is seen as weakness and common sense is attacked as a character flaw. If little else, the system is producing angry customers among the citizens it was designed to serve.

The dangers of the situation are apparent across party lines. Robert Gates, the former Secretary of Defense whose tenure spanned the Bush and Obama administrations, recently said, "the biggest threat to our national security... is the paralysis in Washington." Business leaders from Wall Street to Main Street say that it suppresses confidence, investment and competitiveness. We all see how the erosion of public discourse places burdens on a functioning democracy.

Some costs are measured in opportunities lost. Infrastructure projects, immigration reform, a hike in the minimum wage and other proposals with popular support wither in Washington's toxic atmosphere. On vital matters like debt, the deficit, inequality or trade it's hard to start a discussion, even when credible policy options are in plain sight.

Atop the list of culprits for these woes are gerrymandering of Congressional districts and the equally deforming effects of campaign financing. In districts across the country, what it takes to get elected is sharply at odds with what it takes to govern. And politicians who engage in the real business of governance live in mortal fear of being "primaried." As a recent Pew Research Center study showed, ideological polarization within the electorate is also intensifying -- reinforced by and reinforcing the politics of dysfunction.

In a new book, The Fourth Revolution, John Micklethwait and Adrian Wooldridge, both of the Economist, describe a global competition underway for good governance. And we aren't winning. "The West has lost confidence in the way that it is governed," they write. In their view, the US and European states promise too much and deliver too little. Their solutions -- built around "reviving the spirit of limited government" -- may not be for everyone, but they exemplify the kind of realistic compromise that must be on the table.

Solving the governance equation is part of some prominent developments in US politics. Young thinkers calling themselves "reform conservatives" are presenting serious proposals to grow the economy that challenge traditional GOP doctrine on government's role. Among Democrats, fascination with Hillary Clinton's political future is spurred in part by hope that she would be a strong leader an effective and pragmatic dealmaker.

Another movement with its eyes on 2016 is No Labels, a grassroots effort that has enlisted almost 100 members of Congress across partisan lines. The group is focusing on four big issues: job creation, securing Medicare and Social Security, balancing the federal budget and making the US self-sufficient in energy. It aims to build a coalition that champions the best ideas from Democrats and Republicans.

Of course, change will come only if voters demand it. Despite our divisions, some deeper search for answers may unite many of the nearly 80 percent of Americans who have said the country is on the wrong track. For the first time, independents are the largest segment of voters, outnumbering Republicans by 2-1 and Democrats by a big margin. Fully half of Millennials consider themselves independents, according to Pew.

Is there a potential bloc of voters that would support centrist, bipartisan solutions? Are they a silent American majority? These questions should be on the mind of anyone thinking about leading the country out of its political wilderness.