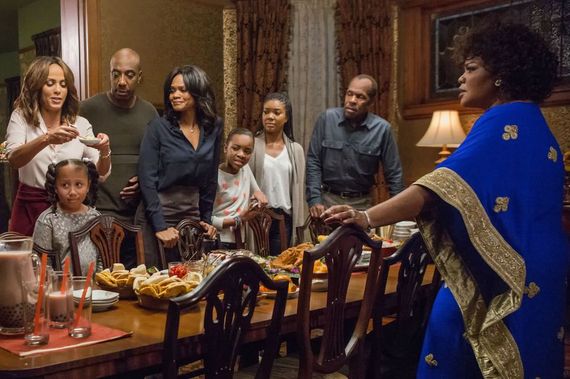 Almost Christmas hits theaters this weekend bringing a black family holiday experience to the big screen, the likes of which we haven't seen since This Christmas, or 1997's Soul Food. The film is a feel good holiday instant classic "nailing the one scene that a Christmas movie needs to get right" among other things.

An all star cast of Hollywood favorites including Gabrielle Union, Danny Glover, Kimberly Elise and Omar Epps joins a host of new comers including DC Young Fly, Keri Hilson, Jussie T Usher, and the return of "Queen of Comedy" Monique. The family themed holiday film is sure to be a classic with Think Like A Man producer Will Packer at the helm and a script penned by First Sunday Director David E. Talbert. Talbert's wife Lyn executive produced the picture making it a family affair with people of color represented both on and off camera.

Gabrielle Union stepped behind the scenes taking on an executive producer role as well as staring in the film. The Being Mary Jane actress called the project "A happy movie" stating: "It's Christmas! I mean who doesn't love Christmas? And its about family and togetherness and over coming obstacles and above all, [its about] love winning.."

THE STORY:
Walter Meyer (Danny Glover) is a retired mechanic who lost the love of his life one year earlier. Now that the holiday season is here, he invites daughters Rachel (Gabrielle Union) and Cheryl (Kimberly Elise) and sons Christian (Romany Malco) and Evan (Jessie T. Usher) to his house for a traditional celebration. Poor Walter soon realizes that if his bickering children and the rest of the family can spend five days together under the same roof, it will truly be a Christmas miracle.

I hit the red carpet at recent the LA premiere and caught up with cast to talk about the film and find out their best and worst Christmas gifts EVER! Take a look and check out Almost Christmas in theaters now. You won't be disappointed! The film is a breath of fresh air at a time when each of us could use a little laughter.