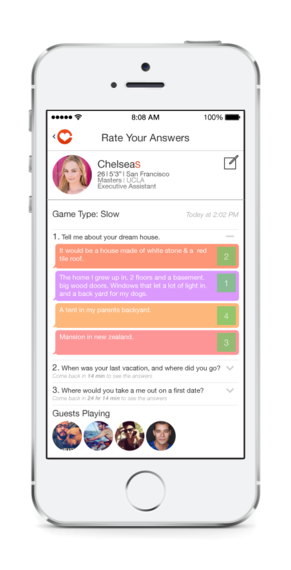 It's a fast-paced, tech-obsessed world out there. More and more people turn to their phones not just to help them remotely start their car, lock their garage, shock them into jogging faster, and ordering pizza at the touch of a button, but also to find that elusive life-goal we all long for (aromantics possibly excepted): love.

Unfortunately, the biggest problem with most dating apps is the biggest problem with most apps (and the 21st century) in general -- we have too many things screaming for our attention. In the same way that it's impossible to choose a show to watch on Netflix with ads for 30 other shows flashing on the screen, it's hard to focus on selecting that one great match when you can already see 30 other potentials lined up behind them.

Not to mention that the digitalization of dating culture makes the whole thing sound pretty, well, technical. You've Got Mail aside, it's difficult to think of a movie about online dating that could make us swoon the same way that we do at When Harry Met Sally or Roman Holiday or The Princess Bride (admit it - comedy movie or not, the Dread Pirate Roberts is still sexy as hell).

That's where Shannon Ong, founder and CEO of The Catch, comes in. "I am trying to bring flirty back," she says of her new dating app.

Not only is The Catch female-centric, an approach not too many dating sites have taken, but it's also gamifying the dating process. The woman initiates by inviting men to compete for a chance to win a date with her. She picks the questions to ask them, and narrows down the pool by selecting her favorite answers to each round. After 3 rounds of questions, the winner is revealed, and the new pair can decide if they want to hang out in person. 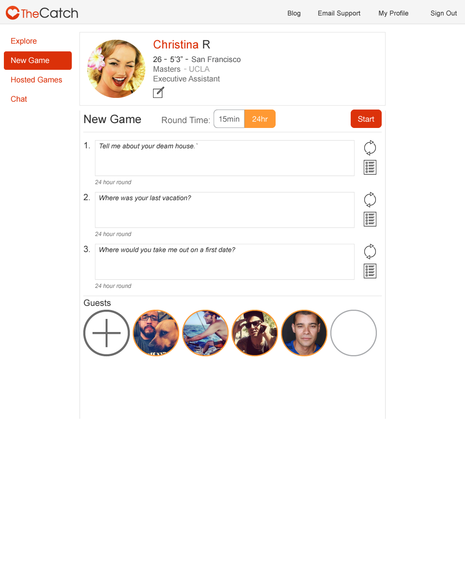 This breaks the ice with far better conversation starters than "hey" or "I like your dog selfie," but it also cuts way down on creepy unsolicited messages and spam. Among the most popular questions asked by ladies during the beta testing were:

• If your life can be summed up by a movie title, what would it be called?
• You have to plan a date but do it without spending any money. What would you do?
• It's the apocalypse. All that remains of the world is you and the SF zoo. Which animal do you eat first and why?

Personally, I love the last question, although the only acceptable answer, of course, would be "tame one of the rhinoceroses, then ride it into the post-apocalyptic wastelands to spear-hunt deer/rescue survivors."

The most refreshing part about The Catch's approach to the dating app world is its focus not on the quantity of matches, but the quality of the ones you're ultimately paired with. When it comes to dating, wouldn't you rather go on one promising date than a dozen meh meet-ups?

Unfortunately, the app is only available in cis-hetero format at the moment, although plans are in the works for LGBTQ-friendly versions (and male-led versions with the guys inviting the gals to their quiz games). The Catch launches on Valentine's Day in San Francisco, with launches in several other cities, LA and NYC included, planned soon.

Also in the future: live dating game events in some of those cities! So watch this space. Specifically, The Catch website.