Shame is rough on us. It punishes us for our mistakes and drains the joy out of our triumphs, leaving us bereft with its conclusion that we're not good enough and never will be. It can reach the point where we're not even clear about the strengths we possess. Eventually, that false voice that says You're not good enough can become a self-fulfilling prophesy that thwarts you in making your dreams come true.

How do we end up this way? The criticisms and judgments of parents, siblings, teachers, coaches, bosses, and other authority figures programmed shame reactions into our brain, but don't worry. All that programming can be reprogrammed.

You can rewire your brain to derail shame at the point of inception with simple processes (like the tool I present at the end of this post). These processes are "neuroplastic," meaning they rewire your brain and in a relatively short period of time -- in four to six weeks... if practiced. The reward is a brain humming with the full measure of talent, intelligence, and emotional balance that predicts a successful, happy life. But until you work with processes that derail your shame-based brain, shame's Catch-22 is going to get you every time.

Here's how shame's catch-22 happens in your brain:

Researchers at UCSF found that the experience of shame is more stressful than work stress. Shame is emotionally punishing. We can't tolerate it for very long and we end up repressing it, which means we don't learn from a mistake and will probably repeat it, which intensifies our sense of shame. 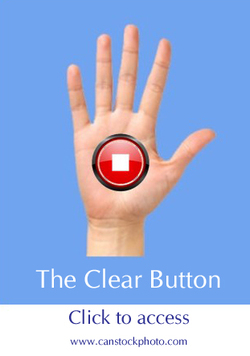 Mark Twain said it's easier to stay out of trouble than to get out trouble. There's a tool that can help you stay out of the trouble shame makes. It's called the Clear Button. Click the picture to the right or click here to access this tool.

There are 20 such tools in my new book The End of Stress.