Martin Luther King said he did more for civil rights than any other white man.

Esquire placed him on its cover in October, 1967, saying that he ought be the next president of the United States.

But J. Irwin Miller, CEO of Cummins Engine Company in Columbus, Ind., was too busy for that. 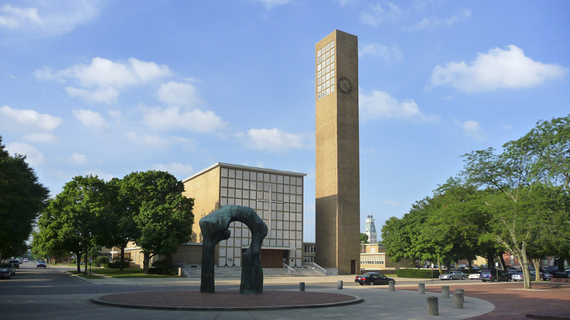 "In the early 1960s, he was head of the National Council of Churches," says Charles E. Rentschler, author of a new book on Miller. "The Ford Foundation and the Yale Corporation were hugely time-consuming, and then there was Cummins, Union Bank, Irwin Management Company and two or three others."

Miller was the mastermind behind a commitment to modern architecture in Columbus. He was instrumental in selecting Eliel Saarinen to design the First Christian Church, which set the town abuzzing.

"It was the first modern church to be built -- not just in Columbus, but in the U.S.," he says. "The townspeople thought that they were building a new factory -- the tower with its clock could be thought of as a smokestack." 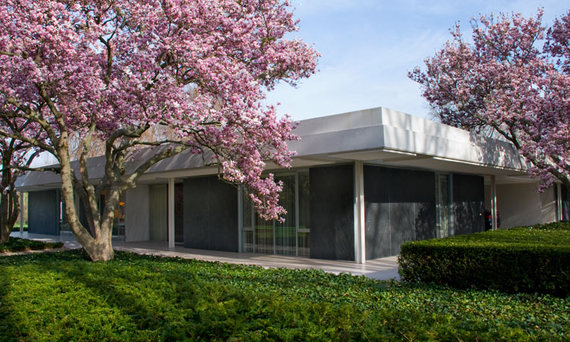 That first church spurred a program of architecture that would result in 40 new schools and 36 additional bridges and buildings in town, all designed by nationally known architects. Most would design only one or two -- like SOM and Robert Venturi -- but some worked on more.

"Harry Weese did 10, and Kevin Roche did seven," he says. "Eero Saarinen did three -- a church, a bank and Miller's home."

Miller had set up the Cummins Engine Foundation for just such a purpose, putting aside five percent of the company's profits for modern architecture. And the company's profits in the 1960s and '70s were substantial, as the nation's transportation systems turned from rail to diesel-powered trucks on interstate highways. 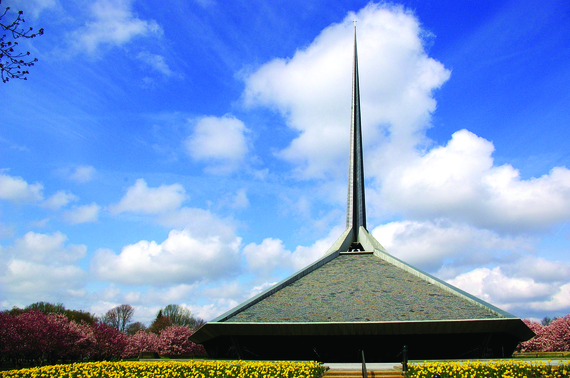 "He thought in the early 1960s that he could put Cummins on autopilot and go do other things," he says. "He thought Cummins could increase its profits by 300 percent in the '60s and 300 percent more in the 70s. And he almost did that -- he achieved 250 percent -- which was absolutely phenomenal growth."

Rentschler's book, The Cathedral Builder, is the first real biography of Miller. It's based on 85 days of research into his papers at the Indiana Historical Society, plus interviews with those who knew him.

It's a fascinating story about a humble Renaissance Man who left behind the best kind of legacy -- one that's articulated in human relations and in modern architecture.

J. Michael Welton writes about architecture, art and design for national and international publications, and edits and publishes a digital design magazine at www.architectsandartisans.com, where portions of this post first appeared. He is also the author of "Drawing from Practice: Architects and the Meaning of Freehand," due from Routledge Press in early May.