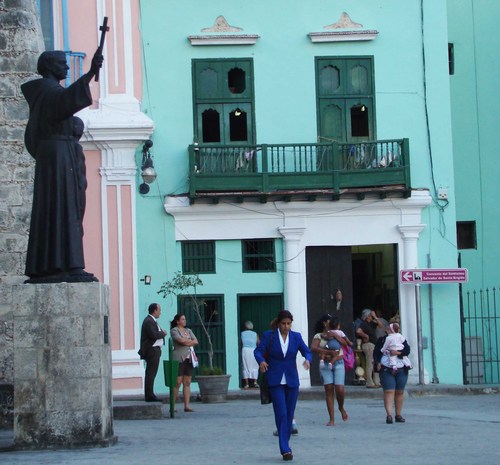 The Catholic Church in Cuba seems determined to play a new social role in the face of the inevitable changes that lie ahead for the island. Senior church leaders finally condemned the "repudiation rallies" targeting the Ladies in White, and expressed support for their demands to release of political prisoners. In an unusual gesture, the cardinal himself met with them and offered assurances that he had obtained a commitment from the authorities to end the repressive actions against their peaceful group. In a show of further support, he celebrated mass at Santa Rita's, where the wives, mothers and daughters of the political prisoners, and the women who support them, pray every Sunday, before marching from the church to demand freedom.

As in the other Latin American countries once colonized by Spain, the Catholic church on the island carries enormous weight with the movement for civic engagement. Its influence exceeds that of the syncretic cults with African elements, and the increasingly energetic and numerous Protestant denominations that have come to Cuba, almost all of them from the United States. Relations between the church hierarchy and the revolutionary government have gone through different stages since January 1959. By the sixties the conflicts had already become very sharp, particularly due to atheism being a part of the official ideology, as well as the confiscation of the religious colleges. Entering a church came to be seen as a counterrevolutionary act, and those aspiring to Communist Party membership knew they could not even baptize their children. For more than twenty years Christmas celebrations were forbidden and many churches were left without priests.

In the late eighties, relations began to thaw, after the publication of the book "Fidel and Religion" by the Brazilian priest, Frei Betto, and contacts with the liberation theologians. Ultimately, in 1991, in an unexpected turn of events, the Fourth Communist Party Congress agreed to accept people with religious beliefs into the Party. In 1998, John Paul II visited Cuba and expressed himself clearly: "Let Cuba open itself to the world, and let the world open itself to Cuba." As a result of this historic visit, the church regained a part of its social role.

In the more than 50 years of the current government, representatives of the church have assumed different positions to confront the authoritarian abuses of the government. Some demand, with more or less restraint, that the authorities respect all human rights; others request, offering something more than their cheeks, that they be given small concessions in exchange for their unlimited obedience. At the heart of the Catholic church - among priests and laity - confrontational and complacent positions coexist.

Now, in mid-June, the church is celebrating its Tenth Catholic Social Week and Dominique Mamberti, the Vatican's Foreign Minister, is in Cuba to attend. Given the fragile situation of the country, hopefully he will make critical pronouncements which the government may find difficult to assimilate. Two years from now Cubans will commemorate the four-hundredth anniversary of the arrival on the island of the image of Cuba's patron saint, the Virgin of Charity; the Pope himself is expected to visit. Although his visit certainly won't have the same impact as the coming of his predecessor, his presence will unleash many hopes. Few are waiting for the appearance of the Virgin to put Cuban affairs to rights. It is hoped that flesh-and-blood human beings, driven by faith or by the interests of the nation, will try to reach an agreement that will pull the country out of the stagnation in which it is mired. The Catholic Church understands that it cannot remain indifferent in the face of these exigencies.

Catholic Church In Cuba Ladies In White Fidel Castro Cuba Frei Betto
This Blogger's Books and Other Items from...