The CDC is shifting its stance on Ebola guidelines following complaints from Texas Health Presbyterian nursing staff, the general public, and various national experts. Dr. Tom Frieden is Director of the U.S. Centers for Disease Control and Prevention (CDC) and an alumnus of Columbia University. He was a medical officer for the World Health Organization (WHO) and he's worked on the front lines to control tuberculosis in India. Dr. Frieden was also New York City Health Commissioner from 2002 to 2009. He's thoughtful, quiet, and smart.

Thursday on Capitol Hill, a House panel debated the Ebola crisis and asked forceful questions of Frieden and others who led efforts to combat Ebola at home and abroad.

Dr. Frieden fears Ebola could spread more widely across Africa and become a global health threat. He emphasizes the need for a solution at the outbreak's source.

Frieden says we know how to contain Ebola. Yet Ebola has not been contained either in W. Africa or the U.S.

Dr. Anthony Fauci of the National Institute of Health (NIH) says, "We will be going into clinical trials" and are now implementing experimental Ebola drugs on a compassionate use basis.

Ebola vaccines are in Phase 1 trials with the U.S. military and the NIH. If safe, the drugs will go into widespread availability. Fauci announces, "This evening we will be admitting to the NIH," into high-level isolation for treatment in Maryland, Nurse Nina Pham. Pham contracted Ebola while caring for patient zero in Dallas, Mr. Eric Duncan.

The fact that hospital staff developed Ebola raises serious questions. Dr. Frieden admits mistakes were made at the CDC. Dr. Vargas, who is in charge at Texas Presbyterian Health in Dallas, concedes numerous errors occurred at the hospital while Mr. Duncan was being treated. Grave, disturbing lapses, which people scramble to correct.

Dr. Daniel Varga: "We did not correctly diagnose (Mr. Duncan's) symptoms as Ebola."

The NIH has two beds at their state-of-the-art containment facility and Pham will occupy one of those beds.

Mr. Upton of Michigan: "The president does have the authority to impose a travel ban." At least three African nations have imposed travel bans.

Frieden explains that borders can be porous. He says we now monitor arrivals and departures, but a travel ban would hide these details. He has a point. But so does Upton.

Ebola is a fast moving issue, and it's hard to strike a balance between informing the public and instilling fear.

We know the case rate is going to increase in Africa and that health providers currently comprise about 10 percent of the infections. Ebola has appeared periodically in Africa since 1976; the WHO predicts 10,000 new cases per week by the end of 2014! Aggressive measures at the source of the outbreak are needed urgently in West Africa. While Americans are understandably concerned for their own welfare, Africans suffer extensively from Ebola and have done so for quite some time. Children, adults, and the aged -- dying in the streets unattended amid terrorized onlookers.

Ms. Schakowsky of Illinois says in terms of the U.S. nurses, it doesn't feel like we have a good answer on how they contracted Ebola: "How come the nurses in Dallas weren't protected?"

Frieden says from this day forward, the CDC promotes a 'Think Ebola' mentality among healthcare workers. He says a hospital can isolate a suspected case and the CDC will talk them through needful protocols. If confirmed to be Eobla: "We will be there within hours," he states. Frieden speaking of Eric Duncan: "The day the diagnosis was confirmed, we sent a team to Dallas."

Miss Fatu Kekula is a 22 year old in Africa who dressed herself in layers of plastic bags and saved her sister, mother and father from Ebola. Alone, she nursed them and saved their lives. Ebola is highly contagious reports Doctors Without Borders. But a large number of heroines and heros are out there saving lives. We need more resources rushed to Africa, less of an attitude of Western entitlement, and a bigger sense of global brotherhood and sisterhood. Stopping any epidemic at the source--early--is the way to go. I personally think Dr. Frieden is the right man to lead the CDC. He needs our help. 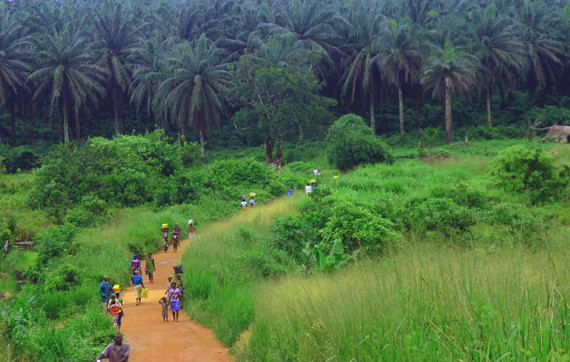