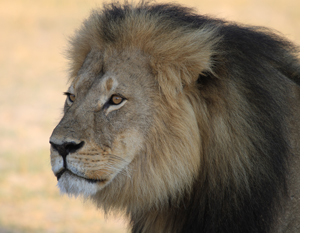 Why do millions of people rally to the cause of one dead lion, yet seem unconcerned about 10 billion live cows on their way to slaughter?

Hal Herzog is a psychologist and anthrozoologist who has studied the complex psychology of human interactions with other species for more than two decades. In his book, Some We Love, Some We Hate, Some We Eat: Why It's So Hard to Think Straight About Animals, he explains how people negotiate these kinds of real-world ethical dilemmas.

Like so many people, I was swept up in the killing of Cecil the lion. I was devastated when I heard the news. Then I began to be aware of the full parade of human irrationality on display in this situation - my own irrationality very much included. I'd like to start by asking if you have any general observations about this.

For me it was this perfect storm. The dentist managed to hit all the wrong buttons in terms of things that people find morally offensive. It just brings out these emotions and passions that people have associated with animals. And oftentimes they're paradoxical.

What's interesting to me is that the people that were least likely to feel that way about Cecil were the animal activists that I know.

Yes, and it made perfect sense when I started to think about it. One of my friends, Laura Wright writes a blog called The Vegan Body Project. When she first heard about Cecil, she said, "You know, I'm gonna go over to Whole Foods and I'm gonna give out fliers to everybody that's walking out with an animal carcass in their bag to point out the irony that we kill ten billion animals a year and they're part of that system. You have a right to get upset about this, but what about the much, much larger issue of the animals that we raise in horrible conditions for our dining pleasure. There's a certain level of hypocrisy here.

I am very much in the "troubled middle" that you discuss in your book. I eat meat, but then I went off the charts for Cecil the lion. Can you talk about how we humans compartmentalize and rationalize our feelings for Cecil but then we go right on eating meat?

Well I think that this is the human condition. Roughly 97 percent of Americans do eat animals, and we have the ability to eat animals at the same time we consider them our companions.

Psychologists have this idea of cognitive dissonance - if you discover your ideas are in conflict, that your attitudes are inconsistent with your behavior or that you're holding two attitudes that are inconsistent, this creates a feeling of angst. However, the thing that amazes me is our ability to completely compartmentalize.

In some cases we have some methods that help us to do this, but in other cases we are simply are oblivious to these inconsistencies, When you point them out to people, a few make fundamental changes but most people don't. So it shows that we are, in fact, able to live the life in which we think of ourselves as moral people, yet we do things or hold attitudes, which other people would say, "No, you're involved in a system which inflicts great suffering on other species."

One of the concepts you talk about in your book is the notion of "psychic numbing" and the "collapse of compassion." We can deal with the suffering of one lion, though the plight of billions of slaughterhouse animals is overwhelming - we shut it out. Is that part of what's in play here?

I think that's absolutely what's in play. And the fact that Cecil had a name I think is also hugely important here. There are roughly 40,000 vertebrate species, and we care about a relatively small portion of those. We care about pets, of course. But we also care about a group that's referred to as "charismatic megafauna," and lions are in that category - lions, killer whales, grizzly bears, elephants, etcetera. Cecil was also in a special category because, first of all, he looked magnificent, but he was also well known. He'd been studied by David Attenborough's research group at Oxford for quite a long time. He wasn't just a random lion; it was a special lion.

The other thing is that Cecil was in a sanctuary. He was in a national park where he was protected. And what the news reports suggest is that he was calculatingly lured out of the park. So there's that sense of betrayal.

So in addition to our concern for animals, and this animal in particular, there's also something that might not have anything to do with animals, which is our sense of fair play.

You discussed Jonathan Haidt's work in your book, the theory of morality, that emphasizes the primacy of heart over head in ethics. Is that also at work here?

Absolutely. A good example of that was the Jimmy Kimmel monologue.

So Jimmy Kimmel loses it a little bit, but in the next sentence, he says, "I'm not against hunting." Probably a majority of people who felt this moral outrage over the killing of Cecil, also support hunting. I say that because 75 percent of Americans support hunting. More Americans support hunting than support animal research. And last year Obama proclaimed September 26th, as American Hunting and Fishing Day and urged people to take their kids out to the woods for hunting and fishing activities. So hunting is a deep-seated American tradition, but yet, in this particular case, people went nuts.

Regarding the tradition of hunting, when we hunted back in the day, we hunted for food and clothing, but now we hunt for pleasure.

That's it, by and large we do; that's exactly correct.

And so we celebrate hunting as an American tradition but we're not hunting for the reason that we originally hunted.

I agree with you. I would argue that it's similar to what happens with my rooster-fighter pals.

That's what got me into this whole thing, more than 30 years ago, I was trying to make sense of how these people, who are really nice people, engage in this activity which is brutal, illegal, etcetera. What they do is construct this moral world in which it makes sense. That's also true of the hunters that I know and who are, by the way, very nice people. They're environmentalists for the most part. They really care about animals. They really like animals, as do rooster fighters. But they construct a cognitive system, and the biggest part of that cognitive system is the idea that they eat the animal. From the animal's point of view that doesn't make any difference.

Speaking of eating animals, you make the point in the book, that gamecocks live much better lives than chickens that are made into McNuggets.

If you had to come back in the next life, I guarantee you'd rather be a gamecock than a McNugget.