Since 1967, Pulitzer Prize-winner Roger Ebert has been reviewing movies for the Chicago Sun-Times, a job that led to him becoming a household name through a long series of television appearances where he and the late Gene Siskel or fellow Chicagoan Richard Roeper debated the merits of whatever film was playing during the week. Despite spending nearly six hours each day watching films, he's also taken time to pursue another passion: cooking. 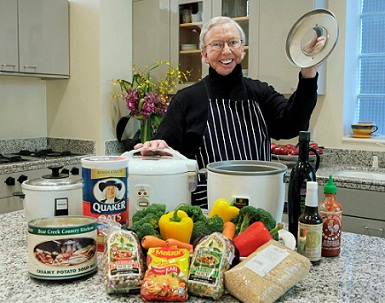 Roger Ebert proudly shows off his rice cookers and his favorite ingredients. Photo by Michael Green of The Associated Press.

The number of people who've sampled Ebert's culinary offerings is considerably smaller than those who've heard his opinions on movies or even his own film (he wrote the script for Russ Meyer's cult favorite Beyond the Valley of the Dolls). From reading his new book, The Pot and How to Use It: The Mystery and Romance of the Rice Cooker, it's obvious that he treats his other obsession with equal passion.

To read his description, making your own oatmeal in a rice cooker can be as rewarding as watching the films of Ingmar Bergman or John Ford. That said, the filmmakers haven't been known for their abilities to lower cholesterol or nourish without resorting to excessive tropical 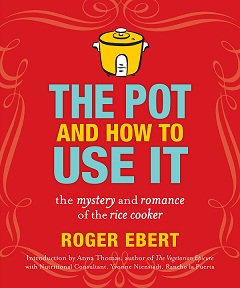 oils or salts. The Pot and How To Use It includes several recipes and rice cooker testimonials from Ebert's blog readers. It also features an introduction from Anna Thomas, author of The Vegetarian Epicure and a foreword by nutritional consultant Yvonne Nienstadt.

It's public knowledge that Ebert successfully fought a battle of bulge in the last decade. Despite watching his calories and getting enough exercise, he had to have part of his jaw removed, which robbed him of his ability to speak or eat. Cancer doesn't care how well you take care of yourself.

As anyone who has followed Ebert in print or online can attest, the big "C" has done nothing to stop Ebert from justly punishing lousy movies or from preparing meals. Contacted by e-mail, the connoisseur of films and food explains how a rice cooker can reward both taste buds and waistlines while taking little space on your counter or your schedule.

Because you've worked with woks and other devices, why do you have a special affection for a rice cooker?

It cooked healthy meals for me with very little time and work, in a foolproof way. My book suggests it is the answer for people who can't or don't cook, and would like to break free from fast foods, carry-out, etc., and improve their nutrition.

Even though you don't eat the dishes you cook, why do you still enjoy making them?

I think any cook would know the answer to that question. To share, provide, and entertain oneself and others.

Throughout the book you encourage the readers to take their own approach to preparing the dishes. This is one of the first cookbooks I've read where the chef offers suggestions instead of mandates.

The rice cooker is like a Mac. Once you understand how to use the machine, the software and/or recipes take care of themselves.

Do you think that the weight loss you experienced before your illness might have led you to pursue more healthy dishes?

I lost the weight primarily by following the Pritikin guidelines. We wanted to cook more healthy meals, but not spend a lot of time and effort. I discovered that The Pot was a quick and easy way to make meals high in fiber, low in salt and fat, and with lots of veggies. Of course Pot owners are perfectly free to use all the salt and fat they desire.

Were you surprised by the number of readers who had good recipes or war stories about their pots?

People love their Pots. No Asian kitchen is without one.

Which movies would you recommend for food enthusiasts? Tampopo is one that comes to mind for me.

As a cook, which movies do you think have correctly presented the process? For example, I used to work at a banking software firm and was elated when Tom Hanks used the correct terminology in Catch Me If You Can.

Big Night has a superb sequence about perfectly preparing an egg.

With your blogs, audio commentaries and even CD-ROM (Microsoft Cinemania) features, you've had an easier time adapting to new technology than many of your peers. Why do you think you've been able to work with the technology and others haven't?

I just always took to it. We started at the Sun-Times with those old ATEX machines, and when Tandy brought out the Model 100 I signed up for MCI Mail and started sending in my copy over the dead bodies of some editors. Suddenly I could work everywhere! I remember the first year I used it backstage at the Oscars, while reporters all around me were shouting desperately to rewrite men. I had my own forum on Compuserve 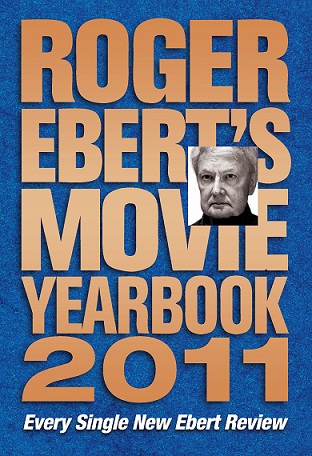 when it had (gasp!) four million members. These days when I can't speak my website and blog are an online community. Plug: I'm at www.rogerebert.com.

Who are some of the filmmakers you are going to profile in this year's yearbook? In the 2009 book, for example, you had interviews with Jason Reitman and Jerry Seinfeld as well as tributes to filmmakers as diverse as Deborah Kerr and Werner Herzog.

In Movie Yearbook 2011, I'll be saluting Herzog again, and his 3D cave painting film, and such late artists as Dennis Hopper, Arthur Penn and Tony Curtis.

Are there any films from this year's crop that you believe need more attention?

You mean like on "Best 10 Lists?" Sneaky. Well, I suppose my list will include The Social Network, Inception and I Am Love.