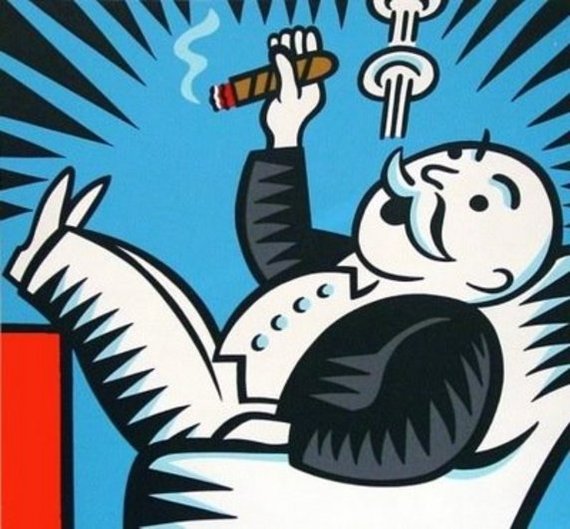 This coming Saturday, well over 100,000 hopeful and aspiring financiers will sit down in desks all across the world and attempt to pass one of the three levels of the Chartered Financial Analyst (CFA) exam. These bright young people have studied for months, spent thousands of dollars, and ignored their friends, their family and their health all in the pursuit of one of the most prestigious professional designations in the world. There is no denying that to obtain those three letters after your signature requires intelligence, an incredible work ethic and anyone who completes this intense and exhaustive course is worthy of high praise. What isn't worthy of praise however is the administrators of the exam, the CFA Institute, because the CFA Institute is a scam of the highest degree.

My undergraduate degree was in Finance and I spent the first five years of my career working in the institutional investment world and I have seen with my own eyes the flaws of the CFA program. If you like diving into the world of rich men throwing around other people's money, then strap yourself in because this is going to be a fun ride. And now, join me as I show off that the CFA is at best, a scam, and at worst, hugely detrimental to society.

All CFA's Are Created Equal

There is no limit to the amount of times a candidate takes the CFA and once you have completed the course, no matter how long it took you, you will receive the exact same designation. For example, there are people out there that have taken 10 years to pass as they will fail multiple times on each of the three levels. There are also people who pass all three tests in the minimum possible time of 18 months. These two people now have the exact same designation and there is no way to tell them apart if they apply for jobs or speak as an authority on a subject.

Of course two people with MBAs both have the same letters after their name but I can easily find out that one went to Harvard in 1990 and one went to the DeVry Institute in 2015. These two people are clearly not identical in terms of their academic background or their experience level but all CFAs are seen as identical.

The logical question to ask at this point is why would they let you take it 50 times? Would you let an aspiring doctor into med school even though they did extremely poorly the first 27 times they took the MCAT? We don't let people fail the LSAT as many times as they want and then let them into a prestigious law school when they finally manage to master the test. We don't do this because this would greatly diminish the prestige of said law school, and in turn, the prestige of all lawyers. So why would the CFA Institute allow and, quite honestly, encourage this behavior? Why wouldn't they have stricter rules for those that fail? Oh that's right, it's because......

The CFA Is A Blatant Cash Grab

The guy who keeps coming back and taking the CFA 10 years in a row and failing again and again is clearly a sadist but to the CFA Institute he is a wonderful annuity payment. He is consistent and he is very valuable. Unlike a university which has to worry about the quality of their alumni, the CFA allows literally anyone on earth to take the test and is therefore playing a numbers game; it doesn't have to worry nor care about the prestige of their network. I am unaware of any other organization, prestigious or otherwise, that will allow potentially severely underqualified people who simply have an enormous aptitude for punishment and time wasting into their group. If someone can come up with an answer for this that isn't 'because the CFA Institute is a blatant cash grab' I'd like to hear it because I got nothing.

Stanford and Harvard might pocket your admissions fee but at least they have the decency not to charge you for tuition when you clearly don't deserve to be there. The CFA is currently signing up tens of thousands of people from India and China and failing them at extraordinarily high levels. The CFA gets the double whammy of being able to keep the designation prestigious due to low passing scores and also incredibly lucrative due to the fact that anyone in the world can pay the fee and take the test. I said the Institute was greedy but I never said they weren't smart. But what isn't smart is the fact that....

Imagine a world in which you went to the doctor for your annual check-up and you saw hanging lovingly on his wall a piece of paper that simply showed his high MCAT score and no other degrees of any kind. This obviously makes no sense but it is not wildly different from how the CFA works at the moment. The other common, difficult tests like the LSAT and the MCAT are nothing more than a screening device so that the best candidates can move on to the process of getting educated by thought leaders in their chosen field, alongside their peers. The CFA is an end all be all. You take the test strictly to beat the test and people study accordingly. Conquering the GMAT is a stepping stone to the next level, conquering the CFA is the only goal there is.

Would you ever trust a person that holds undergraduate degrees in marketing and creative writing but happened to ace the MCAT as your doctor? I highly doubt it and yet many portfolio managers at some of the world's largest asset management firms have no formal education in finance besides the CFA. The CFA is now held in higher esteem than virtually all MBAs or Master's Degrees and thus is often used as a way to rapidly climb the corporate ladder while bypassing a formal education in finance.

So what's the big deal you ask? Smart people take a really hard test and prove that they know a lot about finance right? That doesn't sound so terrible. So although I have my qualms with the methodology and the institute itself, here is where we begin to see why this is all so dangerous. Starting with...

I know many people who have been through the CFA program and almost none of them have come out on the other end making a single friend or acquaintance. I know many people that have never even met a single person until the day of the test as they spent the entire process sitting alone in a dark room studying. By having no debates, no discussions, no teachers, no mentors and no guidance how can one be expected truly learn complex issues, like ethics in the real world?

The process tests your resolve, your determination and your intelligence but it does not in any way encourage the human aspect of finance. The single most important thing for finance professionals to remember is not some ratio or some theory that will almost certainly be shortly disproven, but the fact that almost every finance professional is working with someone else's money. The CFA process does everything they can to remove other people from the process.

The CFA, in essence, slaps people on the back and tells you that you are much smarter than everyone else around you. An MBA program, like most institutes of higher learning, tells you that while you may be really smart, so are all the other bright people you are surrounded by. It is a more humbling experience, it encourages more teamwork and it much more closely resembles the real business world. And this leads to....

The CFA provides charter-holders with a black and white version of the world while studying and then sends them off to work in a marketplace filled with shades of grey. The history of high finance is littered with the corpses of people who simply could not fathom that they could be wrong. Asset management, more than virtually any profession, is the domain of Black Swans and survivorship biases. There is ample evidence of finance professionals attributing good fortune to intelligence and not luck, and bad fortune to luck but never to a lack of intelligence.

I realize that this may not sound like life and death to the average person, but these CFA holders become the portfolio managers that make the investment decisions for the entire system. This means your favorite university's endowment, your beloved charity's trust fund and of course, the retirement income of virtually everyone in America including you, your dear sweet Grandma and Beyonce.

Telling people like this that they can solve finance and solve the markets is a critical mistake. There is no equation or unifying theory to finance no matter what people say. And introducing a whole bunch of people who have an unyielding belief in their own capacity to solve any problem is a dangerous thing when the problem at hand is unsolvable. However, an unsolvable problem with a massive paycheck is one of the few things that will always rope smart people in and this leads us to the final and potentially largest problem....

This one may sound counter-intuitive after I have freely admitted that passing this test is a Herculean effort that can only be accomplished by those with serious intellect and serious drive. However, while the CFA is incredibly difficult for most all people the test is actually not exceedingly difficult for someone who has spent their life studying rocket science or astrophysics. The CFA allows for people with extreme intelligence who otherwise would have had no desire to work in finance the ability to significantly fast track their road to riches.

The test is highly numerical and based mainly on rote memorization. Instead of 10 years of grad school and PHD work in a challenging field, a pathway exists to make significantly more money while doing significantly less work in significantly less time. You don't get into rocket science because you're dumb and you don't have to be too smart to realize that's a compelling argument.

If the CFA didn't exist I believe we would have more brilliant people working in areas that contribute more to society, like science, research and technology. And if you don't believe me that this is a problem, you should see the biographies of many people working at the highest levels of asset management today. You may be surprised at the amount of computer scientists, physicists and mathematicians informing the investment decisions of asset management firms, instead of putting their enormous brainpower into something more beneficial for society. Just think how much worse the world would be if Elon Musk chose to spend his entire career working in the field of one his undergraduate degree, Economics, rather than the other, Physics.

Of course this all nothing but one man's opinion but I do think that the current CFA system as is cannot last. An oversupply is coming as is an increase in organizations realizing that perhaps having your best and brightest employees use their limited mind-share on actual work rather than studying for multiple years for a test is more beneficial to the firm and its stakeholders. Of course, my forecast for the future may be wrong but if there is one group of people who best understand incorrect forecasts, it's the CFA-holding portfolio managers of the world.