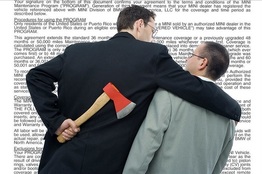 Banks and payday lenders have had a good deal going for a while: They could break the law, trick their customers in illegal ways, and not have to face any consumer lawsuits. Armed by some pretty bad 5-4 Supreme Court decisions, they could hide behind Forced Arbitration clauses (fine print contracts that say consumers can't go to court even when a bank acts illegally), even when it was clear that the arbitration clauses made it impossible for a consumer to protect their rights.

But the free ride is coming to an end. After an extensive study, that proved beyond any doubt how unfair these fine print clauses have been for consumers, the CFPB is taking a strong step to reign in these abusive practices. In a new rule, the CFPB says banks can no longer use forced arbitration clauses to ban consumers from joining together in class action lawsuits. That means banks can no longer just wipe away the most effective means consumers often have for fighting illegal behavior.

This is a common sense rule that will go a long way in combating some of the financial industry's worst practices.

In recent years, for example, if a bank systematically cheated 10,000 consumers in the same way, the bank could use its arbitration clause to stop those customers from going to court together. Each individual had to figure out the scam, figure out what their rights were and then spend time and money fighting the bank and its expensive lawyers. Everyone was essentially on their own. Under most arbitration clauses, one or two customers (at most) would have the means and ability to fight all the way through the arbitration system to get their money back.

In contrast, a class action could offer all 10,000 people a fair shot at justice.

Exempting the financial industry from the normal legal system has had far-reaching - and terrible - consequences. Predatory lending and dishonest practices have pushed millions of people right into desperation. Far too many Americans have been tricked into taking out loans that were far more expensive than they realized.

But help is finally on the way. The free ride is ending.

When it passed the Dodd-Frank Act, Congress required the CFPB to study the use of forced arbitration clauses and take action if those clauses undermined the public interest. So the CFPB undertook a huge, data driven empirical study, which it released in March of 2015. The study found that, when consumers could go to court as part of a class action, they recovered billions of dollars in relief. Banks had to refund over charges, erase illegal or inflated debts, and correct inaccurate credit reports.

When consumers were subject to forced arbitration, though, nearly all of those wins disappeared. Almost no consumers actually fought their way through the complex and biased corporate arbitration system. They just gave up. Predatory lenders generally kept whatever money they'd taken, and could operate in a Wild West manner, unless a government agency intervened on behalf of the helpless consumer.

How did arbitration get to be so unfair? In the past, many state laws were clear that if an arbitration clause that banned class actions would undermine a consumer protection law, then a court should strike it down. But in a pair of 5-4 decisions, Justice Scalia wrote opinions that swept all that law away. As a result, corporations could write fine print contracts that would override actual laws. These decisions - one in 2011 and one in 2013 - were unmitigated disasters for consumers and they transformed the Federal Arbitration Act - in place since 1925 - into a Federal Predatory Lender Immunity Act.

But today, things are changing. The CFPB is living up to its name -- the Bureau really is protecting consumers. CFPB Director Rich Cordray is probably the most effective agency head in the federal government. He is not afraid to stand up to huge and politically powerful corporations on behalf of the American people. He's worked hard to ensure the agency lives up to the vision that Elizabeth Warren had when she was advocating for its creation. It's no wonder why politicians who get huge campaign contributions from large banks hate the agency so much. Many House Republicans attack the CFPB almost as often as they try to repeal the Affordable Care Act.

Today's action is probably the biggest step forward for consumers since Dodd-Frank itself. It's a huge step forward in the fight for common-sense protections. It's a new rule that says the financial sector doesn't get to re-write - or break - the rules anymore.