La Plaza Abaja. St. Vincent's Park. Los Angeles Park. 6th Street Park. Central Park. These have all been names applied to the five acres of land that sit in the heart of Downtown Los Angeles and have served as a public gathering space for all walks of life during the space's 150 year history.

The City finally settled on the name Pershing Square in 1918, though the design of the park has changed numerous times, most recently in the early 1990s. The park's next iteration appears to be just around the corner through the efforts of Pershing Square Renew, a non-profit collaboration between government, community, and business leaders in the Downtown area. On Thursday, April 28th at the Palace Theater on Broadway, the group is hosting "Reimagining the Heart of Los Angeles," a public event which will unveil design proposals of four finalists.

As we await the next version of Pershing Square, here is a look back at the park through the years, via the Los Angeles Public Library Photo Collection. 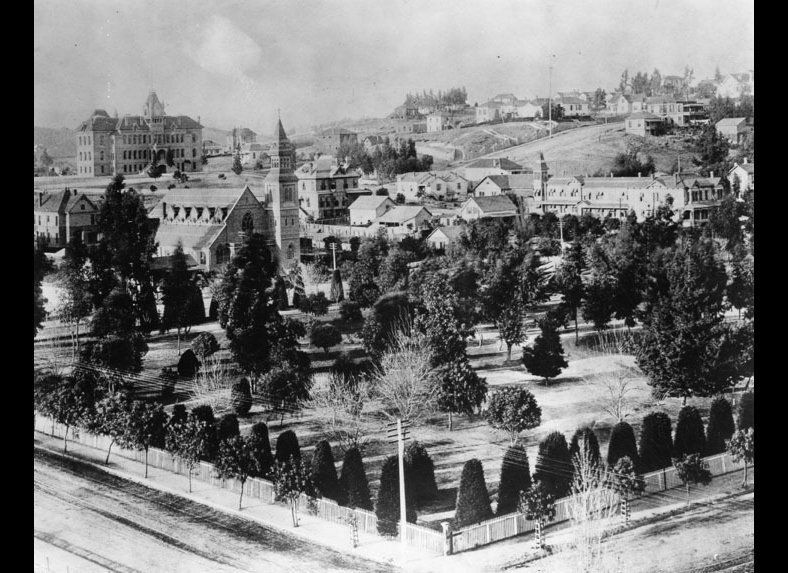 1 / 15
1886
View of what was then known as 6th Street Park, looking northwest toward St. Paul's Episcopal Church on Olive Street and the State Normal School on the southwest corner of Grand and Fifth Street. The slopes of Bunker Hill are on the right. <em><a href="http://photos.lapl.org/carlweb/jsp/DoSearch?databaseID=968&count=10&terms=00011013&index=w" target="_hplink">Security Pacific National Bank Collection/Los Angeles Public Library</a></em>