The gig economy tends to divide opinion quite roundly, with supporters saying it offers a tremendous level of flexibility and opportunity, whilst its detractors suggesting it offers a race to the bottom coupled with intense uncertainty.

I spoke recently with Mariano Mamertino, an economist at job site Indeed about the rise of gig employment. Data from the site shows a six fold increase in searches for roles at the likes of Uber and Deliveroo since 2014. 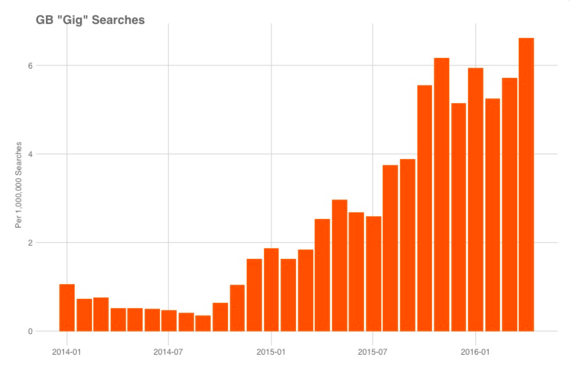 "The gig economy is small but growing. Clearly, interest in these roles is on the increase. They appeal to workers who would like to work part time around other responsibilities, or as a supplement to their regular full-time job. In some cases, workers are trading in the regular 9-to-5 altogether and working a gig job full time on their own schedule," Mamertino said.

As the discussion, and indeed the industry, evolves, the clamor for regulation is growing. Whilst the voices of the platforms are reasonably well known, what is less well known is the opinion of the workers themselves.

Of course, this is in large part due to the disparate nature of the industry, but a recent study has attempted to tap into the mind of the gig worker.

Into the mind of a gig economy worker

The study placed particular focus on the various micro-task platforms, such as Mechanical Turk, where small tasks are completed for very small financial reward.

The authors attempted to understand what workers on platforms such as this got out of their work. Their values were deconstructed along nine core areas:

As you can perhaps imagine, there is a mixture of empowerment and marginalization in terms of how people are paid, the kind of tasks they perform and the way they're governed.

For instance, workers felt empowered when the platform offered a large degree of choice over where and when they could work, but a greater sense of marginalization emerged when such freedoms were restricted.

This empowerment manifested itself in a variety of ways, including the meaning they got from the work, the feeling of competence the work gave them and its social impact.

The study revealed that marginalization tends to occur in one of four ways:

Interestingly, economic exploitation was remarkably common, and considerably more so than the other three forms. This is particularly worrying as the Indeed data suggests that the vast majority of gig workers are 21-30 year olds who perhaps have little choice.

The study suggests that platform providers are generally only interested in having a transactional relationship with workers with little pastoral care offered so long as (expendable) workers turn up and do their work.

It would be interesting to explore whether these kind of 'disbenefits' are also observed in crowdsourcing platforms that attempt to provide a slightly more equitable exchange, both in terms of the meaning of the work and the remuneration provided to participants.

Mamertino also suggests that baby boomers are increasingly turning to this kind of work, and perhaps their higher expectations and bargaining power will help to drive up the value exchange for workers participating in the gig economy.

This is especially so as the sector begins to upskill. Whilst Mechanical Turk might be typified by low-skilled, repetitive work, there seems to be a growing trend towards highly skilled people choosing to work in the flexible ways afforded by the gig economy.

"High-skill workers are moving beyond the 9 to 5. Today's in-demand jobseekers want to have a greater say in when and where their work is done. New technologies make it easier for workers to remain connected across disparate locations," Mamertino says.

A London based innovation scout