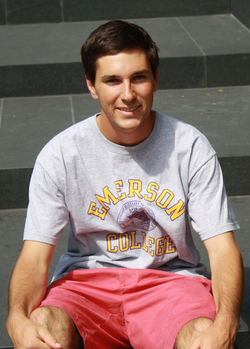 Boats are like movie cameras and can grow into films or stories themselves. When you think a boat's life is over -- dead, think again; its ending grows into a new beginning. Boats can have many lives, as long as their captain has a dream and a good work ethic.

A couple of years ago, I purchased my first boat ever. My mom thought it would never see the life of water again, and was fit for a dumpster. Yet I am a dreamer and a filmmaker who saw another story resting in the old wood. At first glance on Craigslist, I dreamed beyond two quarter-sized holes, rusty brown metal bolts and peeling dusty chips of paint. I called the owner and bargained him down from 275 to 100. In one day, I turned it into my dream with a freshly coated white outside and a clean black line that outlined the sides of the boat like a ribbon. The inside was sky blue, meshing perfectly with the outside. I named it Reel Time.

I know dreams do not come true without hard work like sanding Reel Time for two hours. Once ridding her of the old dry paint, I added two coats of black paint on the bottom for protective coating. This completed a rebirth and created a new life for Reel Time.

Boats and fishing have been my passions since 5th grade. My love of film unfolded when I started my school's television station last year. Yet I can't always divorce my attraction to film from the sea. Last year, my English class read The Sound of Waves, which tells the story of a boy coming of age with the dream to captain his own fishing boat. As I read, my own dreams compelled me to bring the story to life in a film.

I visualized my camera following someone on a boat rocking up and down with a fishing pole. I dreamed of shots of the harbor and the water reflecting in the sun. The next morning, I wrote the script after finishing my scrambled eggs. A few days later, my best friend, Zack, became an actor and the star of my film. Zack had never driven a boat, so I was driving and filming at the same time with the waves bouncing the boat up and down and the wind blowing the hat off my head. After two days of shooting and two nights of editing, The Sound of Waves came to life as a four-minute film.

While I love boats, I also tell stories through film beyond the water and live much of my life away from the sea. Yet fishing and boating influence my work ethic at school and as a three-sport athlete. Boating has nurtured my patience and persistence. While I don't win Lacrosse games by holding a fishing rod, the lessons from the sea sail with me on the field, and set a model for the rule that hard work produces results.

Reel Time can also become a big story when she hits the water. Take Independence Day 2012. The story starts with a clear blue sky--ripe for fishing on Long Island Sound. I don't have my camera, but I directed my own slideshow in my mind. As always the water and weather are major characters in the story. At one moment, I feel the sun's heat. Five minutes later, the sky darkens. A new scene: I dart towards Connecticut's shores to avoid the storm. The waves were still crashing over the front of the boat and I was still getting sprayed with salt water. Within seconds, the water formed 2-foot waves, knocking our boat around. I paused to beat out the storm until it was safe to return to dock and end this story. Certainly Reel Time will help shape many more narratives in both my life and hers.

Jack Bushell, a freshman at Emerson College, is a 2014 graduate of Redwood High School.