As the global moderator for Metropolitan Community Churches (MCC), founded to welcome LGBTQ people, we know what it is to have our people murdered and our churches burned. We know that these acts are acts of terrorism are based on hate and intended to dominate whole swaths of people.

Emanuel African Methodist Episcopal Church of Charleston, South Carolina, was the site of the shooting. It is one of the oldest Black churches in the South and is no stranger to hate. White slave owners burned Emanuel AME in 1822 when founding church member, Denmark Vesey, attempted to organize a slave rebellion. Now, once again, this historically Black church must endure racist violence.

We stand to say all racial terrorism must stop. If White people admit that our privileges are grounded in endemic racism, there might be a chance to turn things around.

I do not speak alone. I speak as part of a diverse community with members in dozens of countries and from many races. My colleague Rev. Darlene Garner, head of emerging ministries with responsibility for diversity in MCC, is a woman of African descent and says:

"As an African American woman, I know we have not come very far when a 21-year old man can sit in a Bible study for an hour and then announce that he was there to "kill black people." He spewed racial hate and executed African Americans in their own church--starting with an 87-year-old woman.

"In the United States we say 'Remember 911,' 'Remember Normandy,' 'Remember the Holocaust,' but when we remember our history of slavery and racism, too many people say, 'Get over it!'

"We will never forget the Charleston Massacre. 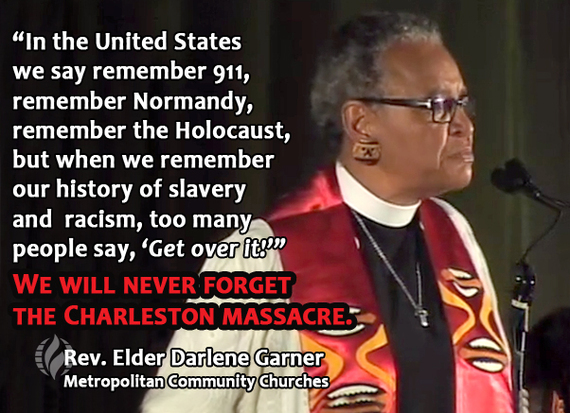 "As a Black child, I learned about Juneteenth, a Black celebration that few in the dominant culture know about. This year is the 150th anniversary of Juneteenth , when the news that slavery was over reached African Americans in Galveston, Texas--two and a half years after the Emancipation Declaration was signed.

"The Charleston Massacre taking place during the season of Juneteenth is a clear and undeniable reminder that not everyone knows that slavery and racial tyranny are over. African Americans have now been legally free for more than 150 years, but racist systems of lynching, redlining, voter suppression, poverty, imprisonment, and massacres have continued to enforce racism from then until today.

"The Charleston Massacre is not an incidental act of senseless violence by a disturbed young man. It is an example of the racism taught to generation after generation and reinforced by seemingly color-blind policies that systematically deny the humanity of people of color.

"Institutionalized racism raised another one of its ugly hydra heads in 2013. At the same moment SCOTUS made history by ruling to allow same-sex couples in California to marry, they gutted the Voting Rights Act of 1965. This month, the Supreme Court may make marriage equality the law of the land, but this country's pact with racism overshadows everything. Any celebration will be dulled by the ongoing grief we feel for the human family.

"People in the United States who wield power have a choice. Will we evolve into massive change for a more just society with checks and monitoring of historically racist practices, or will we devolve into ever expanding violent terrorism against people of color? It is up to us.

"If we as a country would fall to our knees in repentance, and then rise to challenge the underlying racism that pervades this country, change would be possible. The Charleston Massacre could become a historic turning point.

"For Metropolitan Community Churches, founded almost 50 years ago as a haven from homophobia, this most recent act of racial terrorism reminds us that people of all colors, classes, and creeds must remain vigilant, because, as Dr. King said, 'No one is free, until we all are free.'"